Why I Write Sex

I watched my husband get out of the shower and dry himself the other morning, something I’ve seen a thousand times before, and I was moved by the physicality of him. And no, this isn’t going to be a ‘too much information’ sort of post, so relax.

Human sexuality is such an amazing thing. No matter what we say or do we’re all moved by each other’s physical bits, and certain physical bits move us more than others. The physical sexual self sometimes attracts us, sometimes disturbs us, but it always makes us feel something.’

In response to my observations, my husband waxed scientific, as he has a tendency to do. He reminded me of biology and the basic urge to procreate. He reminded me that the need we humans have for long-term relationships is because we need someone to stick by us to raise children, and human children take a long time to raise. I know the biology, and I know about hormones and pheromones. I know about oxytocin and dopamine and other cool stuff that makes us feel good when our physical contact becomes sexual. It’s chemistry. It’s biology. It’s the way the genes make it to the next generation. Yes biology drives us. I get that. And sometimes biology is a bitch. I get that too. And yet… I am moved.

I can’t think that I would write sex and take such pleasure in the writing if I wasn’t moved, deeply moved, and I don’t mean in the moist undies sort of way … though there is that.

We humans are masters in the art of deception, masters in the art of disguise. We are the ultimate chameleons. We know exactly how to hide our true selves from our fellow human beings. And we do it most of the time. No doubt my very smart husband could tell me exactly why that is from a scientific point of view. But for me, it’s a part of what makes teasing it all out on the written page so damn much fun. Humans are masters of disguise and deception until they get down to the rumpy pumpy, then sooner or later, the deception fails and the disguise slips and we are naked animals at the rut, exposed and vulnerable. Let the story begin!

Not much happens in the story with the defenses up and the disguises in place. Enter sex, and everything happens. Even after the sex is over and done with, the story is irrevocably changed because of the act. And what happens next is a crap shoot. Every writer’s dream. When sex enters the story, anything can happen. Sex brings about love and tenderness and bonding and connectedness. It also brings about jealousy and anger and possessiveness and despair. Sex pretty much covers the gamut of the stuff good stories are made of. Leave it out and the story will be bloodless, and the characters thin on the ground. Put it in, and the sky is the limit.

My characters are most deeply themselves when they’re having sex, or when the raw need for it is driving them. I don’t think that’s any real surprise, since we wear our humanity on our sleeve – or lack thereof – where sex is concerned.

On the level of basic biology, we may be able to reduce human sexuality to the relentless drive of the selfish gene to reproduce itself in the next generation, and that in itself is startlingly, bleakly beautiful. But on the level of the story, which is the level of the human heart, sexuality bursts into a kaleidoscope of endless emotions and feelings and needs that are played out in myriad ways. And when sexuality interacts with story, we get ring-side views into the human psyche laid bare. Our characters show themselves for who they truly are, no matter how hard they try to hide. And the harder they try to hide themselves, the more their true nature is revealed. Strangely, the closer we get to the animal nature that drives us all, the more clearly focused, the more finely honed the view is of what makes characters who they are.

It’s because I’m moved by our physicality, it’s because innate maleness or femaleness by its very nature cries out for intimate contact that writing sex is such an enthralling, multi-facetted task. Humanity viewed through sexuality is viewing who we are from the inside out and back in again. When sex happens, all of those archetypal pieces of the human puzzle fit together in high definition, surround-sound clarity. But only for the moment, then they are once again swept away and subsumed into the milieu that’s everything else, and we dust off our disguises, wrap ourselves in our defenses and move on. Ah, but the stories, the wild, delicious stories that come from those few moments of chaotic, breathless, rutting clarity are a writer’s wet dream come true. 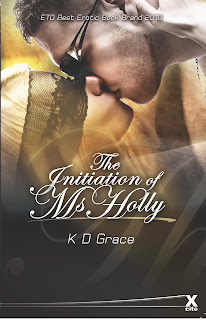 K D Grace was born with a writing obsession. It got worse once she actually learned HOW to write. There's no treatment for it. It's progressive and chronic and quite often interferes with normal, everyday functioning. She might actually be concerned if it wasn't so damned much fun most of the time.

Her second novel, The Pet Shop, also published by Xcite Books, will be available in October 2011.

Email ThisBlogThis!Share to TwitterShare to FacebookShare to Pinterest
Labels: K.D. Grace, The Initiation of Miss Holly, The Pet Shop

I am so glad you have the writers sickness. I can't wait to read The Initiation of Ms Holly.

That cover is so hot. I know I have to read that. Btw, I think it's hot that you still look at your husband that way. People nowadays don't have much respect for marriage and I love to hear about all the couples that can't keep their hands off their spouses.

I love the way your break down sex and love. It's so true.

Welcome to Beyond Romance. I see you've already got the party started... ;^)

I love the cover of the book, too! Wishing you great sales!

"And when sexuality interacts with story, we get ring-side views into the human psyche laid bare."

It's interesting, isn't it, that something so fundamentally human can be, in some contexts, so forbidden, so controversial, so scary. And yet so compelling. (Well, the compelling part makes sense!)

I LOVE all your great comments! One of the best parts of being a guest blogger is getting to make new friends afterward. I'm relatively new at the blogging biz, but loving every second of it. Glad that it's obvious that I adore my hubby. He's been my number one supporter in my writing, and tells his friends I use him for research:) And it really is fabulous to be with other people who see that the magic of sex goes way beyond the biology or the chemistry. If it didn't, I suppose we'd all be reading and writing non-fiction, wouldn't we? Thankfully sex and the endless story go hand in hand, and we'll never run out of inspiration or magic as long as humans do the deed.

Thanks Lisabet! It's been great fun being your guest! Your site rocks!

Excellent post KD. As I read it your words totally resonated with me...and why I write sex.
Characters are deeper, everything changes, enhances, awareness sharpens, and passion...yea, it's a mystical, wonderful, all consuming entity that rules us if we're lucky. thanks for sharing

Lisabet, your post is very true. Thanks for the great read in here. :)