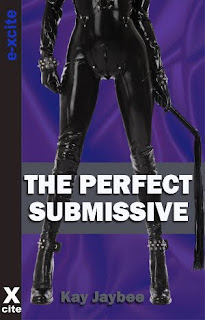 The plotline for The Perfect Submissive came to mind after re-reading a short story (Seducing Laura), I’d penned for the dear departed Black Lace which never made it to publication. Even as I wrote it, huddled as usual over a coffee and a pile of toast in my local cafe, I’d wondered about turning the tale of professional bondage and seduction in a posh hotel into a novel. Real life, work and more work intervened however, and Laura was left to gather dust within my pile of notebooks until early last year, when I came across her again quite by chance.

I love to write stories with added spanks, whips and slaps, so when I reread the tale and saw its potential for a whole catalogue of educationally delicious punishments, I was sparked into action. Suddenly I could visualise the imperious Mrs Peter’s, and knew exactly what affect she would have on a young impressionable female, with no clue as to her own sexual powers. A few scribbles of my black biro later, and the other lead characters were born; the most important of all being Jess Sanders, a woman destined to become the perfect submissive.

If he hadn’t had his neck bent, his face to the floor with respect for Miss Sarah, who greeted him with a sharp ‘Good Morning’, Jess judged he would have been quite tall. And he was young; not the sweaty, aged bank manager Jess had conjured up in her head, but a man in his late 20s or early 30s, with a shaven face, short spiked ginger hair, and well built limbs. He was dressed as a servant, perhaps a stable hand. Jess was automatically reminded of Lady Chatterley’s Lover. Gulping against her dehydrated throat, unwilling to see the sex that she was sure was about to follow, the clerk dropped her eyes, only to have her chin roughly jerked upwards by Mrs Peters.

A patina of panic gripped Jess. Every hair on the back of her neck stood to attention. Until that moment it had been unreal. She hadn’t let go of the hope that at any minute someone was going to turn around and say, ‘OK, Jess, it’s just a joke. We play it on all the new girls. Let’s grab a coffee.’

No one did though. No one was saying anything. The suffocating quiet of the room was broken by the newcomer, who apparently totally oblivious to his audience, was pressed to his knees by Miss Sarah. His head lowered, he was left were he was as the lady sat in the wing-backed chair, her back straight, her chin tilted, her clear eyes filled with disdain as she studied her supplicant.

Jess tried to turn her head away for a second time, but again, had it sharply wrenched back to the scene unfolding before her. She felt incredibly hot despite the general chill of the room, and wished she could take off the thick jumper that was so essential in her cold little bookings office.

‘You know why I have called you here, Master Paul.’

‘Yes, my lady.’ The words were spoken with humility, but Jess heard every word. It was like being in a theatre watching someone dictating well rehearsed lines.

‘I believe I’ve had to speak to you before about your time keeping. Twice before in fact.’

‘I’m afraid that, as this is not the first time there has been cause to reprimand you, the punishment will be more severe this time.’ Miss Sarah didn’t sound afraid at all. Her cut-glass voice sounded triumphant as she towered over the man, who seemed to be getting smaller, as if he was shrinking against her tone.

With a rustle of the petticoats hidden beneath her bust hugging dress, Miss Sarah turned from her client and began to search through the desk drawer. Jess held her breath; positive she knew what Miss Sarah was searching for. It has to be a wooden ruler. Jess had read enough erotica to know how these scenarios went. It was almost text book. She wondered if she should have been disappointed, but the hardening of her nipples told her otherwise, as did the tell-tale twitch beneath her skirt.

Determined to keep her unbidden arousal secret, Jess privately admonished herself for being so susceptible. She averted her eyes from the woman at the desk, but Jess couldn’t bring herself to turn them from the manservant. He captivated her. So strong, so masculine.

What makes him want to come here and be controlled like this? Why does he pay to be humiliated?

‘It’s fascinating, isn’t it?’ Mrs Peters seemed to be reading her mind.

Jess felt goose pimples sprinkle her flesh as her employer continued to speak in whispers, her warm breath tickling Jess’s ear, ‘He’s a strong young man. He is good looking. He could dominate any girl he chose, and yet here he is, getting his rocks off by crouching in obedience before a powerful woman.’

Bio: If you need to find Kay on any weekday morning, then she's usually to be found in the far corner of her favourite cafe, with a large black coffee in one hand, and a ballpoint pen in the other.

After five years of compiling stories and poems, and reviewing other peoples work, she says without doubt, that there is NO going back. Once writing has you in its power you are at its mercy for life. It doesn't pay well, it leads to constant disappointment, and it takes over every other thing you do - but when the publisher says "Yes," and the occasional unexpected royalty cheque arrives in the post, it suddenly all seems worthwhile, and she loves it!

You can find more information on Kay's website: http://www.kayjaybee.me.uk

"a whole catalogue of educationally delicious punishments" sums it us perfectly.

Thanks guys! And of course, thanks for inviting me to blog here today Lisabet. I loved writing The Perfect Sub- seriously contemplating a sequel once my next novel is written... Kayxxx

Another new to me author to read!!!

A new Author for me as well. Sounds very interesting. Would love to read it.
Carol L
Lucky4750@aol.com