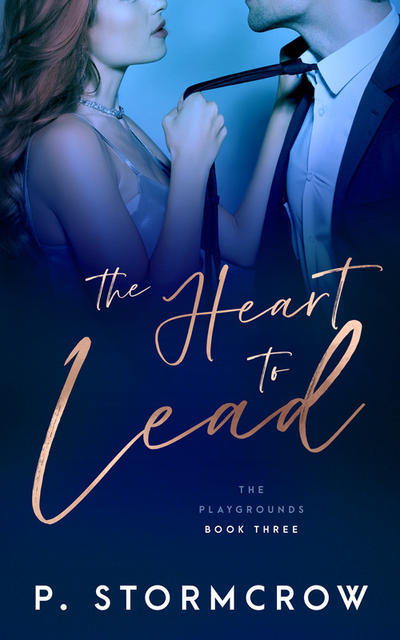 Three years of mourning. One night of pleasure. It might be a new beginning, but only if he is willing to submit.

Three years ago, Lani McMillan lost her submissive, and she has been running from her heart ever since. She may rely on the occasional scene to scratch the itch, but no other has come close to arousing her dominant instincts to claim them as her own.

That is, until she meets The Playgrounds’ latest security contractor, Nathan Pelletier.

He is everything she didn’t expect—ex-military, ex-cop, a fighter, a leader and very much confused by why submitting to her fulfills his deepest desires. So why does she want nothing more than to wrap her hands around his tie and pull him closer?

But time is running out for them to explore their new, tenuous bond, as the demons of both, real and imagined, emerge from the shadows and threaten to consume them. Now they must decide what they are to each other if they are to survive their pasts and their own desires.

Because it takes more than the will of a Dominant to lead.

Reaser advisory: This book contains kidnapping and scenes of violence and torture. It is best read as part of the series.

“Ladies and gentlemen, if you will, the ceremony is about to begin.” Another staff member ushered them deeper inside the house, where they had set up the hall similar to a more traditional wedding venue. Lani had to admire the bouquets of flowers that lined the aisle. Although lavish decorations adorned the room, nothing was over the top. If she had to design her wedding, though, she would have it more subdued, smaller. That chance, however, had long passed. Commitment was not for her anymore.

The couple exchanged their vows with beautiful heartfelt speeches, and soon all the staff herded the guests upstairs once more to another banquet hall. Out of the corner of her eye, Lani glimpsed that same security guard from before. When he stayed within her field of vision, she realized with a start that he was hovering.

Seated with the same group she had been speaking with at the reception, Lani made polite conversation but, to be frank, she was growing tired. From the beginning, she’d had no illusion that this was anything but a work function, an opportunity to network. These people with their yachts and mansions were not her kind. She worked for a living, for one thing. Still, what she wanted was to curl up at home with a mug of tea and process the melancholy mounting within her, to stare at the photos of the last man she’d ever seen a future with—a man who had passed away three years before.

Perhaps coming here was a mistake.

At least dinner was delectable. From the appetizer of crab and shrimp cakes molded into heart shapes to the aromatic lobster bisque then to the main course of miso-based black cod, the seafood option she chose took her on a journey of oral delight. Then there was the chocolate mousse… Lani had to refrain from retrieving her phone so that she could take photos. Her close friend, Luna, would have wanted pictures.

Soon, dinner gave way to more festivities as the doors opened to a dance hall with a band set up on stage. Lani’s eyes lit up before she remembered she had brought no date with her. Had she known, she might have cajoled Darryl or Jacob to come with her. A small sigh of regret escaped her lips as the music began.

Others at her table had already excused themselves to join the growing company of dancers on the floor as the band struck up their first song, a stately number. Left alone with her thoughts, she cast a longing glance at the door.

Great. With another smile plastered on her face, she rose from her seat to find the hosts approaching. She allowed Sharon to pull her into a hug.

Lani smiled. “Thank you. Nothing compared to you, though. Just like a beautiful blushing bride.”

“Isn’t she?” Eric wrapped an arm around his wife and pulled her to him. “We’re glad you could make it tonight.”

“Of course. I’m so happy for you both.” Lani wasn’t sure if it was a shot of envy that twisted her gut.

“We wouldn’t be here without you. Thank you.”

Pride came with swiftness to replace that envy—pride in her work, pride in having been able to help.

“I may have guided, but you two put in all the effort.”

The couple turned and beamed at each other before another woman approached Eric. It was the perfect opportunity. Lani smiled and inclined her head. “If you’ll excuse me.” With the soft murmur, she made a quick escape.

Five steps. That was as far as she got.

The deep baritone came from her left, and she spun on her heels to face its owner full on.

He kept a respectful distance, but up close, his gaze held an intensity much more than the one they had shared earlier across the crowd. The impulse to pull him to her, to fist his hair this time, returned, and she had to clamp down on her dominant instincts. This was not the place for the Domme in her to come out and play.

“Perhaps,” she replied instead, accompanied by an enigmatic smile.

He stepped closer, and she quirked a brow in response. This one was bold. She liked it.

“A dance before you go?” He offered her a calloused palm. As far as pick-up lines went, he lacked sophistication, and Lani wondered if it was something that the man may not be used to. Still, she had been lamenting the lack of a partner earlier.

“Sure, why not?” She gifted him with a brilliant smile, placed her hand in his and allowed him to lead her to the floor.

It was the kind of dance that had him place his hand on the small of her back, and for her to put hers on his shoulder. They held each other’s gaze, neither willing to back down again, as if resuming their earlier interrupted contest of wills. Lani registered the subtle tension in the muscles rippling under the suit.

“So, how much time have you bought yourself, sneaking off duty?” She could not help but tease. He seemed so very serious.

A slight rise and fall of shoulders. “My shift for the night ended fifteen minutes ago. If they need me, they’ll call.”

“I see. And yet you’re still here.” Lani found her smile growing wider.

“So are you, despite not being in the mood.”

At that, she raised a brow in question but allowed the silence to stretch on.

Her mysterious partner sighed before turning them around in a spin in time to the music. He was a skilled dancer and led well enough. Lani had not expected that for a man of his size and demeanor. And that she let him lead at all was a bit of a miracle in itself.

“You smile and play their games, but there’s something you’re sad about…like you’re in mourning.”

Her heart skipped a beat, but neither her steps nor her smile faltered. Instead, she followed his lead, allowing him to twirl her again. Only when he caught her in his arms once more did she give a small laugh in response. “Very perceptive, Mr.…?”

“Nathan.” He nodded at her praise. “It’s my business to be.”

“If I may, since both of us have a lack of reason to stay, would you like to get out of here?”

Lani thought she heard a tinge of hope in his tone, but the desire she saw smoldering in his eyes overshadowed any hints of it.

Bold indeed. But the prospect of spending the night sulking alone did seem rather bleak. Lani knew what Nathan was offering and found it to be palatable—maybe beyond just palatable. It had been a while since she had scratched that itch, even if it wasn’t to play as a Domme. Besides, she was curious about all those lovely warm curves she felt beneath his suit.

“Mm-m, I believe I can be persuaded.”

“This way then,” he whispered in her ear, then stepped back to lead her out of the party into the darkening night.

P. Stormcrow has always been an avid reader across the fantasy and sci fi genres but early on, found herself always looking for the love story in each book. Coming to terms with her love for love later in life, she now writes steamy romances that examine social norms and challenge conventional tropes of the genre, usually on her phone. And yes, she has walked into walls and poles doing so.

When she’s not reading or writing (or even when she is), she enjoys copious amounts of tea, way too much sugary treats, one too many sci fi / fantasy / paranormal TV shows (team Dean all the way) and every otome game she can possibly find.

You can find out more at P. Stormcrow's website - https://pstormcrow.com/

Giveaway! Enter for the chance to win a $50.00 First for Romance Gift Card! Competition hosted by Totally Entwined Group.

Welcome to Beyond Romance! I hope the new release does really well.