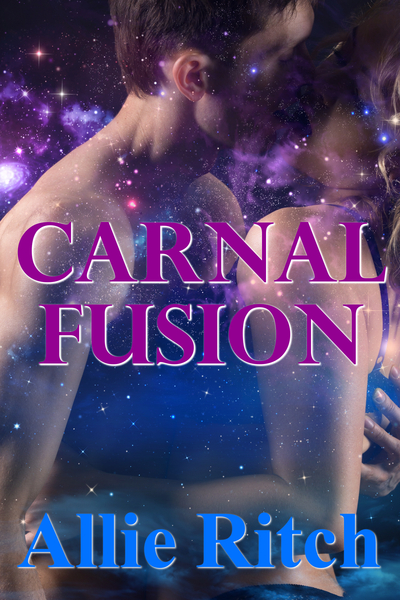 When Liz is abducted by aliens, she doesn’t expect to wind up sharing her body with one. Fortunately for her, Zen presents himself as a man straight out of her fantasies, and he’s not alone. Cole is also a human sharing space with another consciousness—an alien named Voss. Zen, Cole, and Voss have been lovers for years, and they want Liz to join them. Can she really be part of this unusual foursome? Or will her inhibitions and human hang-ups get in the way?

He took his time kissing her until she was oblivious to the rest of the universe beyond them. Then he relinquished her lips to plant kisses down her neck. She could even feel his warm breath against her pulse point. He traced her shape with his hand, starting at her outer thigh and working his way up.

Liz’s breath turned ragged when Zen dipped his mouth lower at the same time that he slipped his hand higher. He cupped her breast and sucked on the opposite nipple at once. She arched her back and cradled his head against her. His mind-reading abilities were fantastic. He knew just how much pressure was enough and when the soft scrape of his teeth bordered on too much. Whereas she had been nervous with previous lovers during their first time together, she realized she could trust Zen absolutely.

“I feel what you feel,” he reminded her. Then he went back to his sensual assault.

She gave herself up to whatever he wanted to do to her. By the time he kissed his way back up to face her, she was mindless with need. She was throbbing and empty between her legs.

“I’m trying not to rush this,” he gritted out, “but I can’t wait any longer.”

He was already spreading her thighs and slipping a finger inside her sheath.

“You consider that rushing?” She’d never enjoyed such exquisite foreplay.

“Yes, but I’ll make it good.” He set his cock against her entrance and thrust inside her.

His sudden entry made her cry out in rapture. After as long as she’d gone without a partner, she expected some strain and burn. She didn’t feel even the slightest twinge. Of course, his cock wasn’t really there, which probably meant he was somehow using her fingers.

“You’re still thinking too much,” Zen grunted. “Relax and accept the pleasure.”

He didn’t give her a choice. In the next instant, he started taking her, filling her with firm thrusts of his cock. He found her G-spot—a spot she hadn’t even been convinced existed—and hit it with every stroke. The friction sent sharp jolts of ecstasy through her until she lifted her hips in greedy counterpoint. She had never sped toward climax so quickly.

“Not yet.” He rolled, taking her with him so that she wound up on top, straddling his hips. “Ride me.”

Liz rested her hands against him for balance, still amazed by how solid he felt beneath her. Her first slide up and down his shaft was slow and measured—a test of how he’d feel in this new position. He gave her two more strokes to get used to it before he gripped her hips to show her the hard rhythm he wanted.

“That’s it,” he praised her, leaving her to work herself over him.

He sent his hands exploring everywhere he could reach, arousing her further. She felt like he claimed every last part of her body until all her nerves were supersensitive. The moist slap of her skin against his seemed to chant more, more, more!

Beneath her, Zen groaned and pumped faster. “You feel so good. I’m going to make you come so hard.”

“Please.” She had never been so desperate for release.

He kept her on the razor’s edge for what seemed like an eternity. With one hand, he pressed his thumb to her clit to rub it in tight circles. With the other, he caught her hip again and pulled her down hard as he bucked beneath her. That final deep stroke sent her spiraling into climax. She cried out and was pretty sure he yelled right along with her. Her sex contracted again and again, greedy for more. He was so hot and hard and real inside her.

By the time the orgasm ended, her thighs were quivering. Zen slipped out of her, and she collapsed on the bed beside him.

“Oh my god.” Liz was breathing as if she’d finished a marathon.

Zen matched her panting beside her. “So I’m upgraded from tenant to sex god? I like it.”

She laughed, but the sound came out airy since she was still gasping for breath. Her whole body tingled, and she was as limp as an overcooked noodle.

He ran his hand down her spine to caress her butt.

“I think we’ve both suffered a drought lately,” he pointed out. “Why not make up for lost time?”

“Don’t you need a few minutes to recover?” She had never heard of a man who didn’t. Then again, he wasn’t really a man.

Zen gave her a lascivious grin. “I don’t if you don’t.”

He immediately set about proving it.

Allie Ritch is a multi-published author of steamy sci-fi and paranormal romance. Her works include her bestselling Children of Nanook series, her popular Alien Sex Ed series, and other books that feature shifters, psychics, genetically engineered husbands, vampires, and other interesting characters.

She has an active imagination and enjoys entertaining others through storytelling. Allie lives in her own little world in the Southeastern United States, where she spends time appreciating the ocean and sunshine.

You can visit Allie's website/blog at http://allieritch.wordpress.com

Welcome to Beyond Romance. This sounds really original (as well as very sexy!)

Thanks, Lisabet. I really had fun writing this book, and yes, there's definitely plenty of sexy!