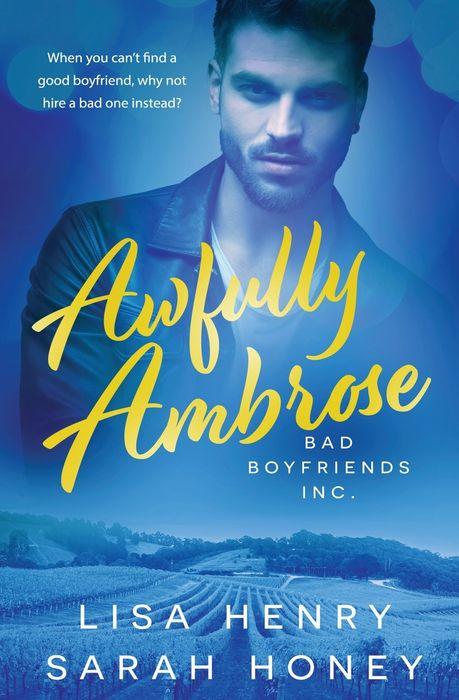 Ambrose Newman isn’t really bad. In fact, he’s a rather decent chap, not to mention really good looking. But as a struggling actor, saddled with responsibility for his not-completely-grounded-in-reality ex-soap-opera-queen mother, he has trouble making ends meet. Hence his business, Bad Boyfriend, Inc. If you’re trying to convince your parents that the boyfriend they don’t like isn’t so terrible after all, you can hire Ambrose. Pretending to be your new flame, he’ll put on a show of being the biggest dickhead on the planet. Granted, it’s not Broadway, but it does use Ambrose’s drama skills and earns him enough to pay his rent.

Liam Connelly loves his big, boisterous Irish family, but sometimes he wishes they’d give him some space. His mother’s convinced the Sydney university student must be miserable and lonely without someone special. In fact, Liam’s mostly happy, even though the last guy he lived with cheated on him. He’d be happier still if his mom would just back off a bit. So when he meets Ambrose (who’s being especially bad at the restaurant where Liam works), he figures the actor could do just as capable a job playing the role of good boyfriend, to reassure Fiona Connelly that her son’s love life doesn’t need her intervention.

The ruse works, all too well. As Ambrose gets drawn into the Connelly’s world, things get increasingly complicated – especially when he realizes he wants Liam as more than a client.

I requested a review copy of Awfully Ambrose because the premise struck me as quirky and original. It turned out to be a fabulously entertaining read. I found myself laughing out loud as I savored the antics of Ambrose, Liam’s outrageous Grandad Billy and Liam’s cat Tobermory. With snappy dialogue, characters who are comic without being totally unrealistic, and a love story that will warm your heart without insulting your intelligence, the book is a thorough delight.

I also enjoyed the setting. Much of the action takes place at the Connelly family winery, which I believe must be located in the Gold Coast. I’ve never visited Australia, and I tend to think of it as dry and dusty, but the area around the vineyard is clearly lush and green, and wet enough to flood regularly. The vivid descriptions definitely made me want to check out this area myself (including the mouth-watering descriptions of the wine and the cheese!)

Speaking of which, I appreciated the Aussie glossary at the start of the book. Sometimes I find Australian English very puzzling.

Awfully Ambrose is the first book in a series called Bad Boyfriend, Inc. I was wondering how Ms. Henry and Ms. Honey were going to keep the idea going after Ambrose retires from the bad boyfriend biz. Snippets from the next book, Horribly Harry, made me think an equally enjoyable encore might just might be possible.

If you’re looking for a light-hearted, clever MM romance with a creative plot and appealing characters, give Awfully Ambrose a try.