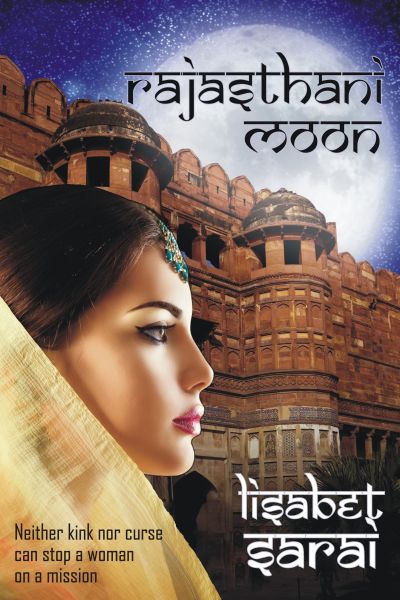 A bandit prince cursed into beast form under the full moon.

A brilliant but sadistic Rajah whose robotic sex toys mingle torture and delight.

A voluptuous spy on a mission from Her Majesty, tasked with discovering Rajasthan’s secrets.

She has never faced such a challenge.

When Rajasthan refuses to remit its taxes, the Queen calls on her most lethal and seductive secret agent, Cecily Harrowsmith. Cecily expects to have little difficulty persuading the rebellious Rajah to submit once more to the Empire. Instead, she is the one forced to submit – to endure unprecedented extremes of pleasure and pain.

Kidnapped by the ruler's half-brother Pratan and delivered into the hands of the handsome but depraved Rajah Amir, she soon finds herself fighting against her own lascivious nature as much as the schemes of her captors. Her sympathy for the moon-cursed wolf-man Pratan only complicates her situation. Cecily has never failed to complete an assignment, but now she risks betrayal by both her body and her heart. They arrived in good time despite the road conditions. The carriage crested a hill. Cecily gazed out to see the calm waters of Nakki Lake spread out before them, gilded by the setting sun. Across the lake loomed the conical bulk of Mount Abu, crowned with gold as the fiery orb sank behind it. On the near shore, just below them, Akanksha Palace gleamed in the waning light, a fantasy in white marble.

“The lake is ancient and holy,” Pratan commented. He had roused himself from his funk. “The palace, though, is fairly new. My father built it as a gift for my mother. ‘Akanksha’ means wish or desire.” His face clouded, and Cecily’s chest ached in sympathy.

“It’s lovely.” Cecily spoke the plain truth. Though fashioned of stone, the edifice had the delicacy of a cloud. It looked like some confection of spun sugar, all airy balconies and minarets, graceful arches and courtyards open to the sky.

The few retainers who had arrived beforehand by air had set candles in the tall windows. As the sun dropped out of sight and the light faded, the place twinkled as though inhabited by fireflies.

“Gorgeous,” Cecily murmured. The coach had left them just outside the gate, in a circular courtyard centred on a fountain. She recognised the motif—Krishna and the Gopis, the milk maids who so adored him. The palace was no less wonderful at close range. Carved friezes decorated the exterior walls, gods and goddesses entwined in sacred congress. Inside, the ceiling rose twenty feet or more, vaulted like the great cathedrals of Europe. Silver chandeliers bearing hundreds of candles dangled from the apex. Meanwhile, a cool breeze wafted in from a terrace that overlooked the dark lake.

She gazed around her in wonder. Pratan stood by her side, brooding and silent. Amir had disappeared with the sleepy Sarita, presumably conveying her to their room. A palace named desire.

On impulse, she seized Pratan’s hand. “Stay with me tonight.” The raw need in her voice astonished but did not deter her. “Please, Pratan-ji. I don’t want to be alone.”

“I dare not, lady. The moon is still below the horizon, but already I feel her energy. I must hasten to my cage. Every minute I spend here with you increases the danger.”

He tried to extricate himself from her grasp. She clasped his hand to her breast, feeling her nipples knot under her blouse. Brazen, she rubbed his palm over one taut nub, striking sparks that sizzled down to her pussy.

“I’m not afraid. You didn’t hurt me before…”

He snatched his hand from her grasp and backed away. “Have you really forgotten the pain, woman? The blood? Leave me be!”

“And if I bite you, and make a monster of you as well? No, no… We must not be together at all, not until the night of the ritual.” He strode off down the corridor, towards the sleeping chambers where she knew they’d set up his iron cage.

“Please,” she murmured, sinking to her knees in the empty room. “Please! I need you. I want you.”

The waters of the lake lapped against the shore. Wind sighed in the garden, bringing hints of jasmine and gardenia. Her vision blurred as she fought against traitor tears. Pull yourself together, she scolded herself. He’s nothing but a savage scoundrel—a beast—Her Majesty’s foe. He’s not bloody worth crying over, that’s for certain.

It was a long, dark and very lonely night. 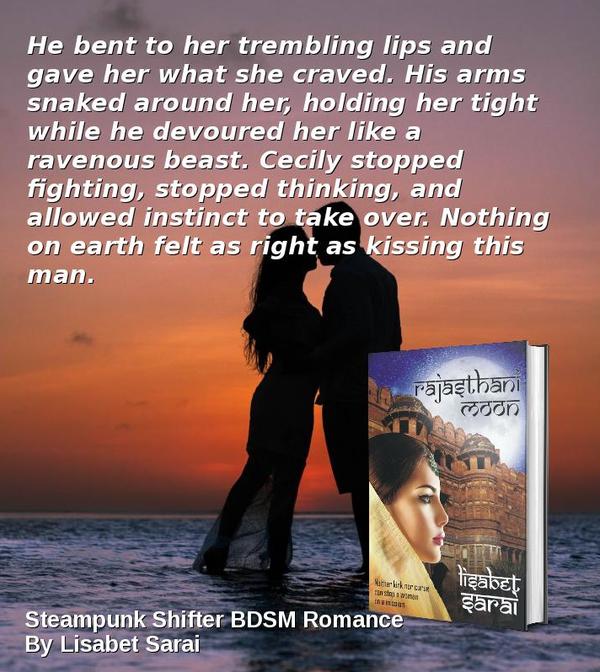 I hope you'll visit some of the other authors participating in today's Book Hooks hop!

Beautifully written and quite an intriguing story

Wind sighed in the garden, bringing hints of jasmine and gardenia - what an amazing line. Tweeted.

What a well-written hook. I loved the description of jasmine and gardenia. Wind signed in the garden, I could absolutely imagine the scene. Great job. Thanks for sharing!

This is a great excerpt. She's seriously playing with danger!