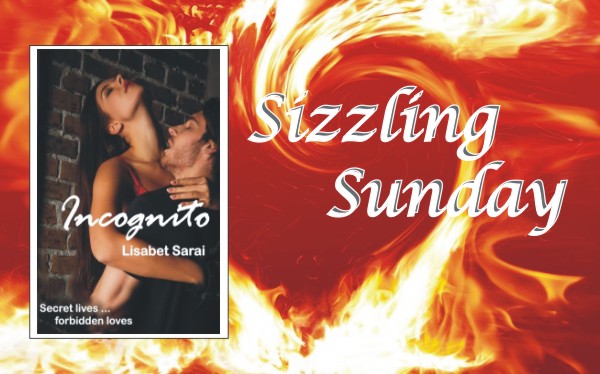 It’s certainly happy for me... I’m off this morning for a week’s much-needed vacation!

Actually, it’s difficult to choose what scene to share. There’s a lot going on in this book...and most of it sizzles!

During the day, Miranda Cahill works diligently on her doctoral thesis. At night, she has sex with strangers.

Public coupling, multiple partners, age play, spankings, bondage, lesbian lust—each salacious adventure exposes new dimensions of her depravity. Her secret life explodes when she realizes her masked partner at a kink club and the charismatic colleague courting her are in fact the same man. The disco music blared. She shook her head, sending her long hair flying, trying to rid herself of the painful memories. She didn’t want to think about it anymore. But her heart was pounding again, and her sex was swollen with remembered passion.

She felt damp and disheveled. She made her way through the dark corridor that led to the ladies room. There, the light was bright enough to make her blink. A bevy of young women sparkled around her in tight dresses and spike heels, preening and perfecting their beauty like exotic and colorful birds. Miranda gazed at herself in the mirror. A stranger gazed back, long limbs and ripe curves, creamy skin flushed with excitement.

I should go home, Miranda thought, as she reapplied her lipstick and adjusted her clinging garments. Enough is enough.

She stepped into the shadowed hallway, seeing nothing but the flash of the strobe at the opposite end. All at once, from behind her, she felt a hand firmly grasp her wrist. “What…?” she began, then there was a finger at her lips, urging her to silence. She was pulled backward, against someone’s body, a man’s body—the evidence bulged against her, pushing into the small of her back. The finger at her lips brushed her cheek then flicked at her right nipple.

I should scream. The thought was fleeting, abstract. Meanwhile there were hands in the dark, silent and skillful. There was no force here, only invitation, temptation. She did not resist as her unknown companion guided her through some curtains, into a place of deeper darkness where the beat of the rock and roll was muffled and distant. There was a metallic sound of coat hangers disturbed by their entrance.

He did not speak, but Miranda heard his rough breathing as he cradled her breasts in his palms. Was it her partner from the dance floor? she wondered. She sniffed for his cologne but caught only the scent of male sweat and her own arousal.

A wave of lust washed over her. Miranda groped behind her, seeking that hard ridge of flesh she knew she’d find there. Blind, she brushed against it. Then one of her breasts was released and she heard a zipper tearing open. Now his cock was naked in her hand, pulsing hot, steel encased in velvet. It was strange and thrilling to have him slide back and forth in her palm, to sense his excitement in the hardening, swelling bulk she fondled.

The hand on her breast tugged, pulling her top down to her waist. Then it resumed its bold caresses, tightening thumb and forefinger on her nipple until she almost cried out. Heat flowed through her. She felt herself melting from the inside out, dampening, softening, opening like some tropical flower.

The stranger used both hands to raise her skirt. She rested her palms against a wall and arched her back, presenting her bottom. He stroked and fondled her buttocks. Each touch made her hungrier, more greedy for the sensation of his huge, unseen cock inside her.

A soft moan escaped her as he reached between her legs to cup her pubis. “Shh,” he whispered. She did not recognize the voice. Impatient, unbearably eager for him, Miranda grabbed her brief bikini panties and pulled them down to her knees. They were soaked, she discovered, as she struggled to remove them entirely.

Unseen hands took hold of the garment. There was the sound of rending fabric as he tore them off her. Yes! thought Miranda, crazed with desire. Please... She spread her legs wide and rubbed her hind cheeks against the hardness springing from his groin.

She felt his fingers groping in the dark, seeking the entrance among the folds. They slipped into her. She pushed, trying to force them deeper. Now the head of his cock prodded her pussy, while his fingers still played there, opening, stretching, guiding. At last, the whole wonderful length of him slid into her.

She bit her lip, struggling to maintain their tacit vow of silence. He worked her, plunging deep and hard, sensing her needs without words. The shrouded beat of the music, the beat of her heart, the synchronized rhythm of their breathing—it was another dance, and Miranda poured herself into it.

The darkness was total. Still, Miranda, driven by instinct, closed her eyes. Other senses took over. The cloakroom was heavy with the animal smell of sex. Sound was muffled, subtle, no voices, nothing but the quickening rasp of air through open mouths. Wanting taste, Miranda burrowed her face into the crook of her arm, to find salt and a hint of musk. Touch, though, was the reigning sense, the glide of his cock in and out of her slick folds, the little twinge when he caught the edge of her womb. His coarse pubic hair like burlap against her thighs when he buried himself to the hilt. The sharp bite of his fingernails as he pried her cheeks apart, seeking deeper access, more complete possession.

Posted by Lisabet Sarai at 6:00 PM

Phew! I'm sweating and it's barely 60 degrees today! Can't wait for this one!