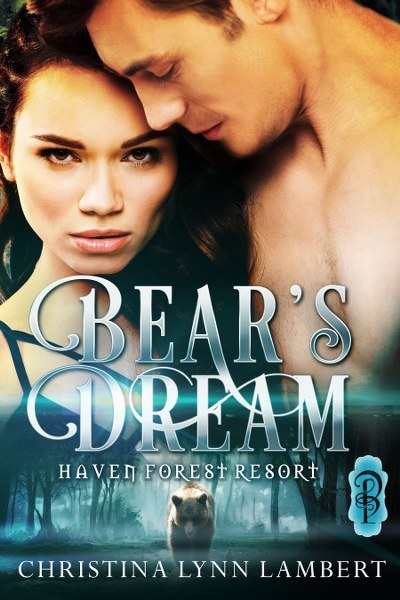 Christina is touring with her new release, Bear’s Dream. She took a break from her busy schedule to chat with us.

Aiden “AJ” Shepherd and his brother Greg were both a small part of Bear’s Edge (Stranger Creatures book 2) and the characters stayed on my mind. Eventually I decided that the Shepherd brothers needed their own series so I had the brothers open up a shifter resort in the Haven Forest Resort series. The first book in the series is AJ and Ellie’s story.

Tell us about your main characters.

Ellie makes decisions quickly and sometimes worries that she’s being impulsive. She is an amazing cook and kind-hearted. She has a giant dog named Curtis who she found tied to a tree and starving when she was on a hike with a friend.

AJ is quiet and serious. He spent a lot of time in the Shifter Enforcement Army and saw a lot of horrible things which have weighed on his mind. He and his brother work on opening the resort so shifters can have a place to celebrate things and run free without worries.

How did you come up with the title of the book?

Bear’s Dream is about two bear shifters who would never have chosen to spend time together if it weren’t for a chance meeting in a hotel bar on New Year’s Eve. AJ’s dream of opening a shifter resort is what leads Ellie to end up working for him as an Events Manager. She wants to help AJ and his brother have a successful grand opening and make their dream a reality. Meanwhile, when a relationship between Ellie and AJ seems impossible, she has a recurring steamy dream about him that just won’t leave her alone.

Who designed your book covers?

Fantasia Frog Designs is amazing and they have done the covers for all the books so far in my Stranger Creatures series as well as for Bear’s Dream.

If you had to do it all over again, would you change anything in your latest book?

No. I would leave it alone. I love the way Ellie and AJ met again on New Year’s Eve and how she learned he was a much better man than she originally thought.

What is your favorite part of this book and why?

I love the way AJ tells Ellie how he thinks she’s amazing and a good cook. He tells her a lot of really nice things not because he wants to please her but because he sees the truth of her wonderful personality and is honest with her about what he thinks.

What can we expect from you in the future?

I am working on book 2 in the Haven Forest Resort series. This book will feature Rob, the leopard shifter Head of Security at the resort who had a small part in book 1. I will also be working on completing my Stranger Creatures series as well as publishing some poems in different magazines and anthologies.

If your book had a candle, what scent would it be?

Ellie’s Kitchen - The scent of cinnamon roll cake drifting onto a back porch to mingle with the breeze on a spring night.

Okay, so tell us some random fun facts about the book

Ellie has a terrifying time trying to drive a moving truck to Haven Forest Resort. She has difficulty with depth perception and hit a bush while trying to park the truck.

I wanted to throw my computer out the window several times while writing this book because my kids were in virtual school for almost a year and a half and I couldn’t get any peace and quiet to work.

Thanks so much, Christina! Here’s a bit more about the book.

She had every reason to hate him.

Aiden “AJ” Shepherd’s mistake during a Shifter Army Enforcement rescue mission cost Ellie Ortiz’s brother, Marco, his life. Ellie hates AJ with a burning passion until a chance encounter with him on New Year’s Eve reveals he’s not the cold, heartless man she once thought him to be. Her attraction to him takes her by surprise, and she vows to ignore her feelings. When a new job puts her in contact with him every day, the heat building between them threatens to flare out of control. Her resolve to keep the sweet, sexy man in the friend zone is weakening by the day.

He’s convinced she’s his mate, but a secret could ruin everything

Whether they’re fighting off fanatics who target shifters or working together to get his shifter resort, Haven Forest, ready for the grand opening, AJ can’t get enough of Ellie. Convincing her to give him a chance, more than the one-night-of-fun idea she’s proposed, might be impossible, but he’s fallen too hard for her not to try. During a disastrous assignment with Shifters United, AJ uncovers some information that changes everything. Keeping the secret from Ellie is killing him but he might lose her forever if he tells her the truth.

When Ellie ends up at the heart of a reporter’s plot to prove the existence of shifters, she and AJ must fight their way to freedom. The survival of shifters everywhere depends on it. 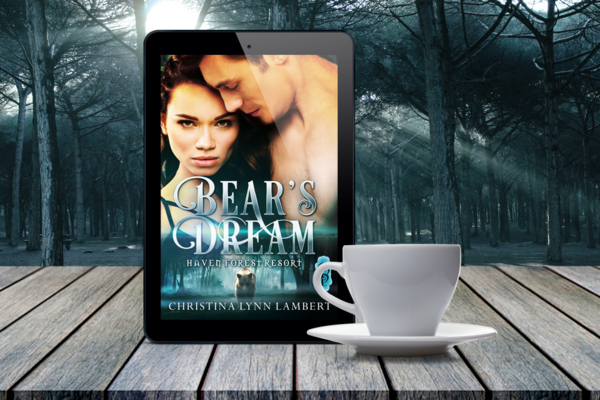 AJ staggered toward Ellie, holding his side. She caught him before he fell. Blood poured down the side of his face. She pulled the hood of his coat over his head to hide the blood.

People rushed over to them, asking if he was alright.

I guess they only care how he is now that the fighting is over.

The wolf shifter woman cleared a path to AJ and guarded his other side. “I’ll help you get him to the woods. My friend can stall the cops and do crowd control while you guys shift out your injuries.”

“Thank you. Seriously, thank you.”

Ellie grasped AJ’s face in her hands and looked him in the eye. “We just have to get to the woods. It’s not far. Stay awake and stay with me. I can’t carry you. Understand?”

“Yeah.” His voice was barely audible.

An eternity later, they found a spot amongst the pine trees and bushes with enough cover for him to shift. “Hold on. Don’t shift yet. Let me pull these chunks of metal out of your head first.”

He cursed as she pulled one particularly large, jagged chunk out of his scalp. Blood poured down his face and neck. His eyes drifted shut.

He slumped over, oblivious to her yelling. She stripped him then dug her fingers into his stab wound. He growled and shifted into bear form. A sob of relief escaped her. AJ shifted back to human form, then, a split second later, he was a giant furry brown bear again. The bear walked around for a moment, dug his claws into a tree, then pressed his nose to Ellie’s cheek, making her laugh. In the blink of an eye, he was in human form again.

“You’re sure?” She ran her fingers over the places on his head she’d seen cut and gouged. No sign of any wounds. She looked at his eyes. He focused on her properly. She breathed out a sigh of relief. “I’ve seen more than one shifter be pressed for time to heal and they weren’t healed up as well as they thought.” His injuries hadn’t been superficial. He wouldn’t have made it to their room to shift in privacy without being stopped by well-meaning regulars—shifters and psy often referred to humans with no strange, extraordinary abilities as regulars—insistent on taking him to a hospital.

People who hated shifters lurked in hospitals, watching, waiting to destroy anyone they found out of the ordinary. Today, some ignorant haters had almost killed AJ, at a damn winter festival celebration. Nowhere was truly safe. She was still freaked at how close he had been to losing consciousness and never waking up. She knew damn well he would have died if he hadn’t shifted when he did. She didn’t want his light to burn out. Didn’t want anybody’s light to dim, really, but he was… She shook her head. A good guy. That was all. She didn’t want to see a good person die too young. She wrapped her arms around herself and her eyes teared up.

She met his gaze, reluctantly.

“I’m all right,” he assured her. “The important thing is, a group of angry men didn’t get the chance to beat the living hell out of a shifter teenager.”

He gently stroked her cheek and his hand came away bloody. “Your turn to shift.” She hadn’t felt any pain in her face. Probably because several of her ribs were cracked and her stomach had a fist-sized knot in it where she’d been punched. She stepped behind a tree, undressed, and shifted. B shook out her thick black fur and walked around a few paces in the woods. After a moment, she reluctantly shifted back to human form. Ellie stopped still when she caught AJ staring at her.

“Damn, you’re beautiful.” His appreciative tone wrapped around her. She gulped and ducked behind the tree to put her clothes back on. She emerged, wrapped back up in her bloodstained winter coat and clothes. At least the blood wouldn’t show up since everything she was wearing was black. 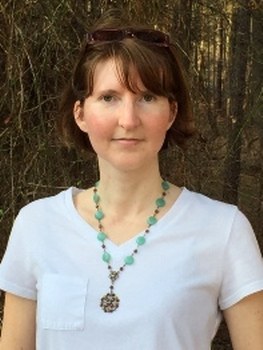 Before I had the wild idea to write a book, I worked in a few different fields. I was in sales for a while, and after I finished college, I worked as a case manager. When my children were little, I was a personal trainer and running coach. During the evenings, when I was supposed to be studying for another fitness training certification, I started writing a story. Finally, I gave in and acknowledged that writing is what I’m meant to do. I love creating imperfect but determined characters who find the courage to love and the strength to survive in a world where there are no guarantees. My stories include a fair amount of sarcasm, suspense, steam, and violence. When I’m not writing, I enjoy spending time outside and finding ways to avoid cooking. I live in beautiful Virginia with my husband, two daughters, and a sweet, hairy monster of a dog.

Christina is giving away a $10 Amazon gift certificate to one lucky reader. 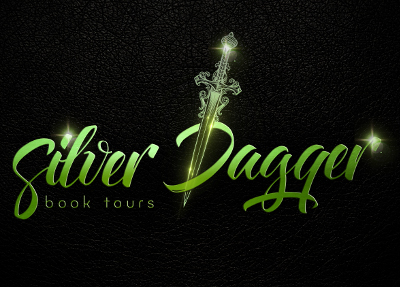 Thanks for being my guest. I hope your tour goes really well!

It promises far as I can tell to be a nailbiter! reneela2000(at)gmail(dot)com

Hi Lisabet. Thanks for having me on your blog!

Stranger Creatures book series by Christina Lynn Lambert is one of the best I have read.