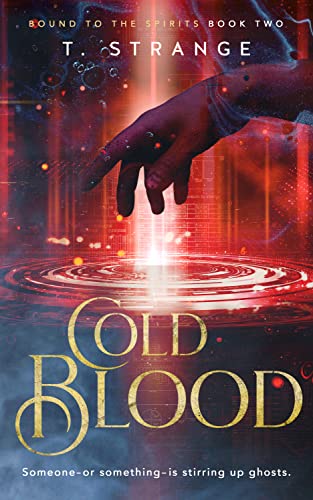 Harlan Brand is rarely comfortable. In general, he’s leery of people. He doesn’t like to be touched. Gifted – or perhaps cursed – from birth with the ability to see and communicate with ghosts, he struggles to fit into the ordinary world. It doesn’t help that when he was just a kid, his parents dumped him at a center for children with paranormal talent; all the people around him as he grew up were as weird as he is.

Despite all this, he’s working for the Toronto police along with a small group of other mediums. His work partner, Hamilton, has only slight psychic gifts, but he makes up for that by being tough, brave and efficient. Meanwhile, against all odds, Harlan seems to have found love, in the most unlikely of places: a BDSM club. His new boyfriend Charles stirs him physically and touches him emotionally, in totally new ways. But a lifetime of feeling like an outsider has Harlan wondering if he really deserves a warm, sexy, supportive guy like Charles, and worrying that he’s going to blow it.

As Harlan juggles his personal insecurities, Toronto experiences a psychic emergency. He and his colleagues have no choice but to use their powers, to counter the forces that are turning ordinary ghosts into vicious monsters and abducting and murdering mediums. Harlan is pushed to the edge of his abilities as he tries to stop ultimate evil from taking over the city.

I’ve always loved stories with a hint (or more) of the supernatural. Cold Blood delivers. The author does a fantastic job showing us the price of power. Harlan’s paranormal abilities are impressive, but using them takes a terrible toll, both physically and emotionally. He’s not a superman; he has his limits. What is most thrilling about this book is watching him push those limits, giving everything and more because of his intrinsic sense of moral responsibility.

I also enjoyed the intrinsic queerness of this story. Harlan and Hamilton are both gay. One of their fellow mediums is lesbian, another non-binary. In this version of the world, nobody is “normal”, and gender-bending is part of life.

I did have a few issues with Cold Blood. First, it really doesn’t do a good job standing alone. I have not read the first book in the series, and both my comprehension and my enjoyment suffered as a result. I strongly believe that each book in a series needs to be sufficiently self-contained that a reader who happens to pick up in the middle will not be too lost.

Posted by Lisabet Sarai at 7:05 AM