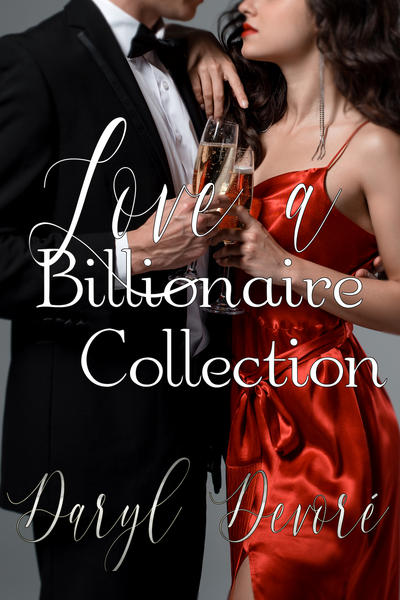 After a mistake by a surgeon’s scalpel shattered Fuchsia Quinn's dance career, she picked up the pieces of her life and moved forward.

Peyton Lang, having run from an impoverished neighbourhood, lives the lifestyle of a successful billionaire.

Frustrated that his current multi-million-dollar project is stalled, Peyton drops in to LEATHER-ICIOUS for a quick drink and late night entertainment. What he saw was a beautiful redhead. What he found was he wanted her.

Where Derek Davenport is concerned, women only had one thing in mind: trap him into a marriage.

Unemployed and nearing financial desperation, Arianne is forced to step out of her comfort zone. With minimal hours and excellent pay, she accepts the position of courtesan to a handsome billionaire.

Their sexual antics cause emotions neither is willing to admit. Will Arianne and Derek drive each other crazy…or will they fall in love first?

Two Truths and Lie - The legend of Robin Hood and Maid Marian with a twenty-first-century twist.

As if multiple planes crashes, a car accident, and a concussion isn’t enough, carefree Byn and straight-laced billionaire, Mark clash over Byn's need for independence and Mark's struggle with guilt pushing him in the opposite direction of love. When an art forger, an art thief and a ninety-year-old woman get involved the chance for true love for Byn and Mark fades.

All is lost until a children's game is their only hope. 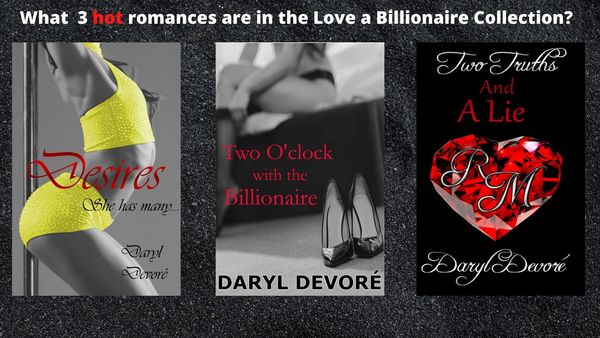 BookSprout – for read and review – https://booksprout.co/book/64122/love-a-billionaire-collection

Flame slithered her fingertips along the side of the cold metal pole. Thick. Hard. Erect. She coiled her fingers around it and locked gazes with the man in the NY Yankees ball cap. She flicked her wrist up and down the long, metal shaft. He blinked. She jacked the pole several more times then kicked off and spun. Wrapping her legs around it, she pressed her crotch against the pole and arched back, hands supporting her on the stage. She smiled in Baseball Cap Guy's direction and then ran her tongue in a circle over her lips.

He closed his eyes, groaned, and visibly shuddered.

Want me, don't you? You creepy bastard. Biting her bottom lip to hide the smirk threatening to adhere to her lips, Flame pushed off the stage, grabbed the pole, threw her legs outward, and swung. She planted her feet wide apart on the floor, reached back overhead, gripped the metal rod, and, moving hand over hand, bent backward until her head was low between her legs. She held back a chuckle, imagining the look on the Yankee fan's face and the effect of staring directly at her crotch was having on him.

She loved tormenting the baseball fan. Most of the men who frequented the bar were out looking for a night away from their life. Baseball Cap Guy was the stereotypical lowlife who hung out in strip clubs and bars, and she played on that. She'd writhe, moan, and pose, offering him the sexual fantasy he'd come to LEATHER-ICIOUS for.

The music pounded out the closing chords of the song. Flame straightened, pushed off the stage, and with her legs spread wide, circled the pole three times. As the last note sounded, she dropped her feet to the floor, slid out to full side splits, lay forward, resting her chest on the stage, and released a sexually tinged sigh.

Applause scattered through the bar. It was Thursday and early, not a lot of customers. Flame stood and sashayed back to the dressing room. She didn't have to look back. She knew all eyes watched the wiggle of her thonged ass.


Two writers in one. Daryl Devoré writes hot romances with sexy heroes and strong heroines and sweet romances with little to no heat. She has several published books available on Amazon in ebook or print book and available at other book retailers via Books2Read.

Daryl (@daryldevore) lives in an old farmhouse in Ontario, Canada, with her husband and 2 cats. Daryl loves to take long walks on her quiet country road or snowshoe across the back acres, and in the summer, kayak along the St. Lawrence River. She has touched a moon rock, a mammoth, and a meteorite. She’s been deep in the ocean in a submarine, flown high over Niagara Falls in a helicopter, and used the ladies room in a royal palace. Life’s an adventure and Daryl’s having fun living it.

Thanks for letting me stop by and bring along my latest.
Tweeted.