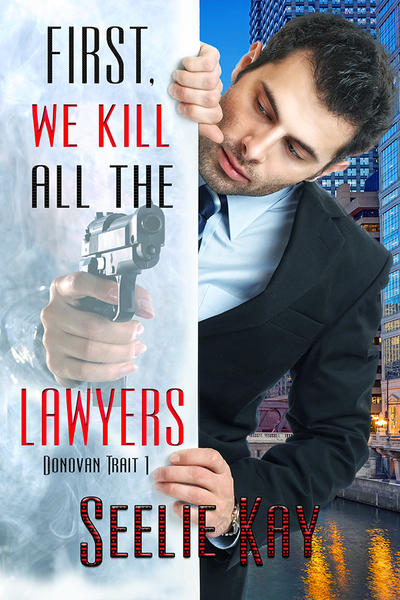 I’m delighted to welcome Seelie Kay back to Beyond Romance. Today’s she’s celebrating the release of her latest book, First, We Kill All the Lawyers, a contemporary romance with elements of suspense from Extasy Books. She’s agreed to answer a few questions for you...

Q. Why do you write romance?

Because I am fascinated by the games people play to find and secure a lasting relationship, which is not always love. There’s the chase, the courtship, the falling, the surrender. That’s what I try to capture in my stories.

Q. Do you prefer a certain type of romantic hero?

Q. Why did you write First, We Kill All the Lawyers?

I have wanted to write a vampire tale for some time, but had difficulty coming up with something consistent with current tropes. Finally, I decided it was time to break all the rules. After all, vampires have been around for centuries. Surely, they have evolved by now. And no doubt, they have many of the same societal problems that humans do. However, I also wanted the vampire to be a lawyer. The title came from my experience as a lawyer. I can’t tell you how many times someone would quote Dick the Butcher, “The first thing we do, let’s kill all the lawyers.” (Shakespeare, Henry VI, Part 2, Act IV, Scene 2.) They would laugh heartily, like they had just told a wonderful joke, but for me, it was great inspiration for a story. What if someone was killing lawyers?

Q. Obviously, your former profession as a lawyer impacts your writing!

My friends say I am obsessed with justice and I guess that’s true. After 30 years, the law and the legal world are so firmly embedded in my brain that I can’t flush them out. That has become the lens through which I view the world and that naturally guides my characters and plots. Injustice infuriates me, but it also leads me to great stories! Even in this book, I find a way to explore social and criminal justice issues. 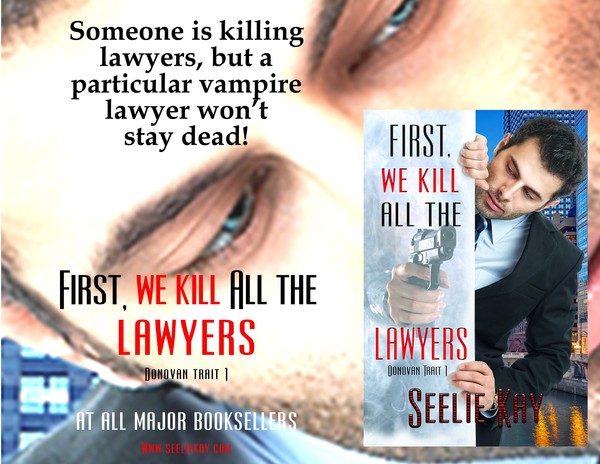 Someone is killing lawyers, but a particular vampire lawyer won’t stay dead.

Donovan Trait is a marked man. Flamboyant, stunningly handsome, and notoriously insatiable, his attitude and style belie his skills in the courtroom. No one survives a cross-examination at Donovan’s hands. His knowledge of the law and trial practice has accumulated over the years… and years, of experience. More than three hundred years. You see, when Donovan isn’t seducing judges and juries, he’s a creature of the night. And now that someone has decided that it’s time to kill all lawyers, his lust for attention has set him in the murderer’s sights. The problem is, vampires don’t die. Not easily, anyway. That’s good news for Donovan, not so much for his very human lady love, also a target of the serial killer. Will several unsuccessful attempts on his life expose Donovan’s true nature? Will the killer learn the secret that will guarantee a permanent death? Or will Donovan finally manage to put an end to the killer’s murderous spree and live happily ever after, with his lady love?

Donovan’s cell phone pinged. He pulled himself into a small alleyway, away from the stampede trudging back to their workplaces after lunch, and leaned back against a building to read a text. His face screwed up in confusion. The text read, The first thing we do, let’s kill all lawyers! Starting with you!

“What the bloody hell?” he muttered. “Is this some kind of joke?” Donovan’s eyes surveyed his surroundings. He gazed right, then left. It did not appear that someone had made him the focus of their attention. Everyone was scurrying about, like mice in pursuit of a big cheese. “Must be Finley,” he said. “Finley is always plying me with lawyer jokes. He thinks he’s funny.”

Donovan shrugged. Not funny at all. He left the alleyway and re-entered the mass migration on the sidewalk. He approached the crosswalk at Michigan and Superior and emitted a snort of frustration as the light changed and the crosswalk filled with cars. He was bumped hard by someone behind him. Donovan was forced to step into the street to regain his balance. A cab rushed by and narrowly missed clipping his side. Donovan jumped back onto the sidewalk.

A woman screamed and Donovan jerked his head around, trying to see what all the fuss was about. The woman was pointing at him. Donovan frowned and turned away. God save me from simpering females who saw the last issue of City Magazine. Donovan had appeared on the cover after being named as one of Chicago’s most eligible bachelors. Since then, he had learned that the female population was comprised of women of questionable morals and distressing behavior. He was growing weary of the attention. While his colleagues thought it a wise marketing strategy, it had brought him nothing but unwanted female attention. He had become prey.

Vampires were predators. They stalked their victims. Sometimes, they pursued them with a vengeance. That was why he had joined the legal profession. His predilections were well-suited to that particular world. Now, his role had apparently shifted and he was not pleased.

Someone tapped Donovan on the shoulder. “Sir? Are you alright? You’re bleeding. It appears someone stuck a knife into your side.”

Donovan’s mouth gaped and he turned toward the man who had spoken. Then he looked at where the man pointed. There was indeed a knife sticking out of his left side and a stream of his blood was flowing onto the sidewalk. He had a very high threshold of pain. He hadn’t felt the knife thrust into his side. If it wasn’t so appalling, he would be embarrassed. Donovan opened his mouth to reply. Then the pain in his side exploded and his vision dulled. Slowly he slid onto the sidewalk as if he planned to sit on the curb.

Then everything went black.

Seelie Kay is a nom de plume for a writer, editor, and author with more than 30 years of experience in law, journalism, marketing, and public relations. When she writes about love and lust in the legal world, something kinky is bound to happen! In possession of a wicked pen and an overly inquisitive mind, Ms. Kay is the author of 18 works of fiction, including the Kinky Briefs series, the Feisty Lawyers series, The Garage Dweller, A Touchdown to Remember, The President’s Wife, The White House Wedding, and The President’s Daughter.

I love your cover, Seelie. Who wouldn't fall for him?

Thanks so much for featuring "First, We Kill All the Lawyers" today! My book is part romance, part thriller, with a touch of humor thrown in. Donovan Trait is not a vampire to be trifled with, in the courtroom or the bedroom!

Looks like a fun read. And yes, that's one hot lawyer!