What happens when a woman thinks too much... #Fantasy #Review #Feminist #Giveaway 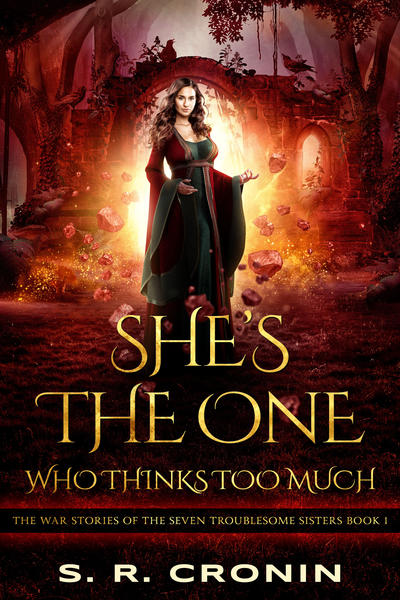 Do you know what your problem is?

Ryalgar knows hers. People have been telling this overeducated 13th-century woman for years. So when an equally intellectual prince decides he loves her, it looks like everyone was wrong and her dreams have come true.

Except, this prince is already betrothed to another. He’s leading the army training to defend their tiny realm against an expected Mongol invasion and he is considering sacrificing Ryalgar’s home nichna of Vinx by abandoning it’s rich farmlands to their foes.

Another woman would flee to safety. Maybe she would seek another lover. But not Ryalgar. Living in a world where witchcraft has been allowed to flourish and problematic powers remain, she devises her own strategy to keep the invaders from destroying her home.

This is just the sort of thing that happens when a woman thinks too much.

After a couple of anks, I decided to ask about seeing Nevik. I’d noticed the other women came and went, missing classes and chores on occasion, and it didn’t seem to bother anyone.

We were in the kitchen, and our instructor, a chubby and friendly woman from Lev, was going over how the Velka traded our skills and products for most of our food and drinks, as few edible products grew in the shade of the forest.

“Um. There’s a man. We were lovers before I came here. I’d like to get word to him. To find a way to see him.”

“To see him. Right. Well, orientation instructors like me assist with all such requests for seeing. So, we’ve got Velka going out to markets in each nichna in the realm. Where would this man of yours be found?”

“Plenty going that direction. Must be a dozen markets there. Can you be more specific?”

“Ah. You’re hooking up with a Svadlu, are you? Those military types can be sexy. I’ve had a few myself.”

I looked down at my hands.

“Not to worry,” she added, trying to guess why I hesitated to say more. “When I said we Velka value discretion, I meant it. Word of your soldier friend will not leave the forest. You can count on it.”

“You’re sleeping with a member of the Pilk royal family? Seriously?”

I had everyone’s full attention now.

“His name is Nevik.”

She slammed her hand down a second time and laughed out loud. “You’re telling me the golden granddaughter we recruited is also secretly sleeping with the guy who just got betrothed to some fancy princess from another realm?”

“Well, you do know how to make things difficult, don’t you?”

Ryalgar, the oldest of seven very different sisters, didn’t intend to fall in love with a prince. But when they connect at the midwinter solstice festival, Nevik is sweet and funny, respectful and intelligent, while their physical compatibility leaves them both craving more. Knowing her infatuation is unwise, Ryalgar visits the Velka woman in the market, seeking a potion to undo her growing affection. She is surprised to discover that the wise crone who tends the stall selling herbs and remedies is her paternal grandmother, whom she has never met due to her mother’s unexplained antipathy. Ryalgar and her grandmother share an immediate affinity. Before long, much to her mother’s dismay, Ryalgar leaves home to join the Velka, a mysterious society of women who live in and protect the impenetrable Open Forest. Within their enclave, she’s able to read and study as much as she likes, as well as practicing and perfecting her talent for oomrush – telekinesis.

Becoming a Velka does not require her to be celibate. She and Nevik can still meet when his palace duties allow. However, his impending marriage, a political alliance of convenience, as well as the frightening news that Mongol hordes are preparing to conquer the land of Ilari, complicate Ryalgar’s life. In concert with her Velka sisters, she hatches a plan to fight the Mongols, not with force but with craft, deception and misdirection. More intellectual than outgoing, thoughtful rather than charismatic, Ryalgar nevertheless finds herself in the position of leading her country’s campaign to discourage and deter the impending invasion.

From the first page, with its hand drawn map, She’s the One Who Thinks Too Much pulls the reader into a diverse, colorful and plausible world, with its own geography, culture, language and politics. S.R. Cronin has done a wonderful job creating Ilari and its peoples. She places the country vaguely “west of the Black Sea”, but east of the steppes that are the Mongols’ home. Ilari is fantasy world that includes subtle forms of magic, but the author presents oomrush, luskis (people who can use their voice to make others obey) and frundles (idiot savant visionaries) more in terms of individual aptitudes than awesome powers. Like cooking or gardening or archery, the strength of these abilities varies from individual to individual, and can be enhanced through focus and exercise. Ilari also has distinctive customs (strongly linked to the calendar points of solstice and equinox), prejudices (the Velka and the promiscuous, gypsy-like reczazy are both suspect), and sexual mores, which are more relaxed than one might expect from a traditional society, but which still emphasize family and children.

Ryalgar is an unusual heroine, whose most important attributes are not beauty or ambition or even courage, but rather imagination and analytical ability. The defenses she builds are surprising, creative and complex. I particularly enjoyed the notion of re-sculpting the landscape, building new hills and re-routing roads, in order to confuse the enemy. Ryalgar’s father, a soil expert, supervises this challenging task, which must be accomplished by thousands of people with shovels.

My one criticism of the novel has to do with the pacing, which seemed a bit too even. Ryalgar’s defense plans take shape gradually, bit by bit, but as the expected invasion draws closer, the intensity of the action does not climb accordingly. Although events provide a narrative arc, cresting with the Mongol’s onset, the emotional energy remains a bit too steady for my liking. There’s no climactic scene, even when Ryalgar unexpectedly finds herself in the middle of a battle. Her schemes unfold more or less like clockwork. Though the very survival of Ilari is at stake, I often didn’t feel much sense of urgency.

Maybe this is a reflection of the way Ryalgar’s mind works. She is the point of view character, telling the story in the first person, and she is, ultimately, the one who thinks – maybe more than feels.

Overall I really enjoyed She’s the One Who Thinks Too Much. I’d definitely consider reading the other books in the series, each of which I gather will feature one of Ryalgar’s sisters. Ilari’s a place I’d be happy to revisit. Sherrie Cronin is the author of a collection of six speculative fiction novels known as 46. Ascending and is now in the process of publishing a historical fantasy series called The War Stories of the Seven Troublesome Sisters. A quick look at the synopses of her books makes it obvious she is fascinated by people achieving the astonishing by developing abilities they barely knew they had.

She’s made a lot of stops along the way to writing these novels. She’s lived in seven cities, visited forty-six countries, and worked as a waitress, technical writer, and geophysicist. Now she answers a hot-line. Along the way, she’s lost several cats but acquired a husband who still loves her and three kids who’ve grown up just fine, both despite how odd she is.

All her life she has wanted to either tell these kinds of stories or be Chief Science Officer on the Starship Enterprise. She now lives and writes in the mountains of Western North Carolina, where she admits to occasionally checking her phone for a message from Captain Picard, just in case.

S.R. Cronin will be awarding a $10 Amazon or B/N GC to a randomly drawn winner via rafflecopter during the tour.

Email ThisBlogThis!Share to TwitterShare to FacebookShare to Pinterest
Labels: review

Welcome back to Beyond Romance, Sheri! I reviewed One Two a number of years ago and loved it. This was very different but equally good.

BTW Amazon won't let me post the review until after the book releases.

Thanks so much for hosting me here, Lisabet and thanks for the review. I did not know about Amazon's posting rules for re-orders, but now I do :). Yes, I'd be very grateful if you'd post it after the book is released tomorrow.
It's a pleasure to be back on your blog!

I love Sherries' book series, "46. Ascending". I have read them all and I hope there are many more to come.

I appreciate hearing about your book, thanks and for the giveaway also. Thanks so much!

I love that the author checks her phone regularly for messages from Picard! LOL. AS a Trekkie from when I was a little girl and it was on network TV, I understand--I grok that. Sounds like a good read.

Thanks for the comments everyone. Fiona -- I'm so glad you understand the Star Trek obsession :) Glad you enjoyed 46. Ascending, Audrey and I hope you'll check out this new series.