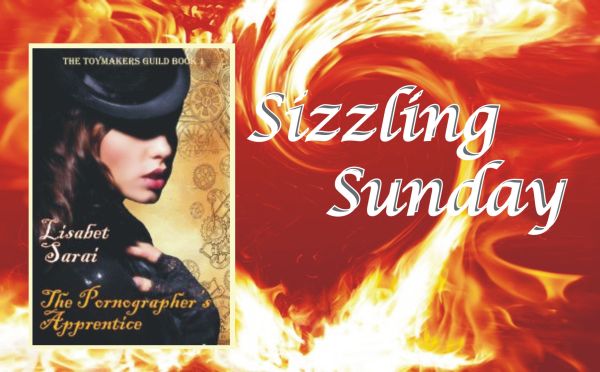 Welcome to a very special Sizzling Sunday! I’m sharing an exclusive excerpt from my new steam punk erotica novel The Pornographer’s Apprentice, Book 1 of a new series: The Toymakers Guild. The book will not be released until tomorrow, but today I am sharing a generous (and very spicy) bit to whet your appetite.

The book is full of naughty sex toys – creating them is, after all, the business of the Guild. Here’s a bit where Gillian and her fellow apprentices are involved in some “product testing”. 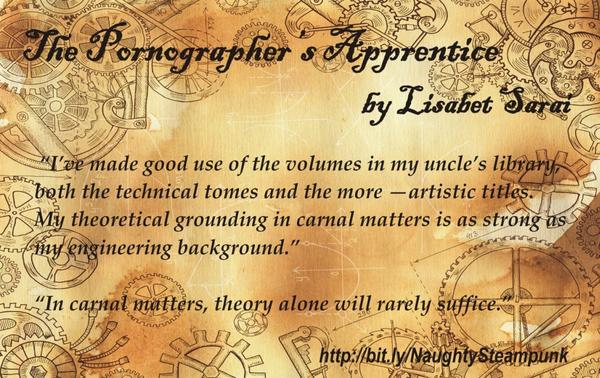 “If only we could test—” Archie sucked in his breath. “Oh! Jill—you could help even more if you were willing…”

“To give the device a trial run?” Gillian finished his thought. “I might consider it.” Her juices flowed more copiously as she contemplated the imminent realisation of her naughty fantasies. However, she didn’t want to seem too eager. “Not both of the cocks at once, of course.”

Archie’s cheeks flushed bright pink. “No, no, of course not. No young lady would ever—”

“At least not until I’ve tried them one at a time. I need to be able to concentrate.”

“Quite so,” Ian agreed, a lecherous light burning in his green eyes. “So are you willing?”

“For the sake of the Guild? Certainly.” She glanced around the lab. “But where?”

“Over here.” Archie led her to an alcove, behind the gallery stairs. Tucked into the cosy space she found something similar to a dentist’s chair, with padded seat, back, headrest and armrests. Instead of a single footrest, the apparatus provided separate extensions for supporting each leg, with stirrups for each foot. Levers on the side were obviously intended to control the height, inclination and the separation of the thighs. Furthermore, she couldn’t help but notice the sturdy leather straps with brass buckles, affixed to the arm and leg supports, obviously intended to restrain the chair’s occupant.

Archie gave a quick demonstration of the fiendishly clever apparatus. Hydraulically controlled, the chair moved smoothly from one position to another.

Gillian swallowed the sudden lump in her throat. Was she really so brazen? So much in thrall to her carnal cravings? It appeared that she was. Without further enticement, she climbed into the chair, positioned her limbs appropriately, and pulled the voluminous lab coat up to her waist to bare her dripping sex.

“So we see,” commented Ian with a wicked grin. He fiddled with some controls. The stirrups drew closer to the seat, allowing her to bend her knees. Then they separated, opening her further.

By itself, the position aroused her. Lewdly displayed, the folds of her cunny slick and swollen, she was both accessible and vulnerable. Had they cared to do so, either Archie or Ian could have overpowered her, forcing their pricks into her wide-open cavity. A quick glance told her that both were in fact erect. However, the randy apprentices had other goals to accomplish.

Archie stood beside her, a cock in each hand. “Who do you want to try first? Fat Charlie or Long Donald?”

Gillian surveyed the two phalluses. Her mouth watered. Both were lovely.

“You choose,” she replied finally.

“Very well,” said Ian, at her other side. “Why don’t we blindfold you? Then we’ll see if you can distinguish the two.”

He already held a black velvet domino. Evidently this was a standard item of lab equipment in the Toymakers Guild.

He covered her eyes with the mask and tied it behind her head, careful not catch any of her hair. The world went black. Almost immediately, Gillian’s other senses grew more acute. She caught a whiff of Ian’s earthy scent as he moved past her. She felt currents of air as someone positioned himself between her splayed legs. A snatch of song came to her ears, then the sound of a hammer, apparently in the main room.

“Who’s that?” she asked. She hadn’t looked all that closely, but she had thought they were alone in the laboratory.

“What?” Archie’s voice, close to her side.

“I hear a woman, singing. And someone doing some sort of construction.”

“That’s just Lucinda, up in the gallery. She’s our graphic artist.”

“Tug’s building a new bondage frame.” Ian’s voice, near her feet. “Didn’t you see him?”

“I thought it was just us…” She’d been more than ready to be their guinea pig, but she wasn’t sure she wanted to be involved in a public performance of depravity.

“Don’t worry. We’re all sworn members of the Guild,” Archie reminded her.

“And we’re all used to salacious activities. I’m sure they will hardly notice.” Ian chuckled. “Anyway, it’s too late to back out now. Open up, Jill.”

Oh! Ian’s motor performed flawlessly. Deep, deeper, and deeper still, in and out, in and out, the device fucked her with mechanistic precision. She’d never been penetrated so thoroughly; Lyle had barely entered her when he’d spent. In addition to its pumping motion, the toy began to vibrate, sending quivering echoes along all her nerves. Her clit throbbed and tingled. A climax gathered like an impending storm, tension roiling in her belly. The dildo’s strokes accelerated, accentuating the pleasure instant by instant and pushing her closer to spending. A little faster, a little harder, and she would reach the peak.

As if in answer to her desires, the toy began to pulse, swelling against her inner walls. The extra pressure was just what she needed. The need built to unbearable levels until at last the dam burst. Waves of bliss swept through her, flooding all her senses. Behind the blindfold, bright bursts of colour danced, matching the delight that sparked along her nerves.

Get your copy of this delightfully randy Victorian romp from your favorite bookstore!

Posted by Lisabet Sarai at 2:27 AM