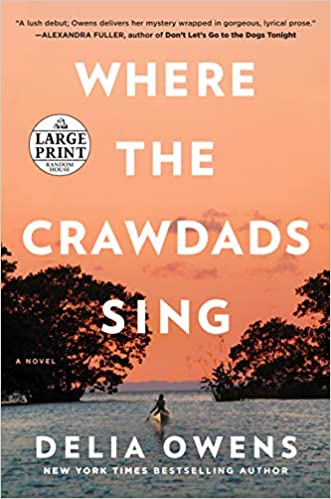 Where the Crawdads Sing by Delia OwensGP Putnam’s Sons, 2018

Everyone in the coastal North Carolina hamlet of Barkley Cove knew that Kya the Marsh Girl was strange and wild. How could she be anything else? Abandoned by her abused and desperate mother at age six and by her cruel and bitter drunkard of a father a few years later, she grew up alone in the marshes outside of town, the gulls and the herons her only friends. Somehow she’d managed to survive, foraging along the channels that laced the wetlands, bartering mussels and smoked fish, cultivating vegetables behind the rickety shack that sheltered her from the elements. Ragged, unschooled, too shy to speak, too proud to beg, Kya was practically a myth to the people of the town. It was all too easy for them to believe she was responsible for the murder of Chase Andrews, scion of what passed for high society in Barkley Cove.

Only her friend Tate knows she’s innocent. The son of a local shrimper, Tate has loved Kya all his life, but a broken promise in his teens drove a wedge between them. Tate knows the real Kya: brilliantly intelligent, fiercely independent, deeply connected to the land and the sea that have fostered her. He’ll do anything for the lovely but guarded young woman. He taught her to read. With his help, she has developed her affinity for the natural world into an occupation that can provide her with a steady income. Even Tate’s love, however, can’t shield her from the prejudice that has kept her isolated and which now threatens to rob her of her cherished freedom, perhaps even her life.

Reviewing a best seller can be difficult. Where the Crawdads Sing, a remarkable first novel to have been written a wildlife biologist with a PhD in animal behavior, has sold more than five million copies and garnered over one hundred thousand reviews on Amazon. What can I possibly say that’s new?

Actually, reading a best seller has its own problems. One has, perhaps, inflated expectations. A close friend recommended Ms. Owen’s book to me, swearing that I’d absolutely love it.

Sometimes it’s better to happen on books without knowing anything about them.

Please don’t misunderstand me. I enjoyed this novel. It’s beautifully written, evoking the coastal marshland environment in lush, lyrical prose and bringing Kya’s lonely but occasionally ecstatic life into sharp focus. The narrative, which shifts back and forth between the fifties of Kya’s childhood and the late sixties of the murder trial, is deftly executed. The twist at the ending surprised and delighted me; though I thought I understood Kya, I had not discerned all her secrets. The fractured romance between Tate and Kya is both heart-breaking and satisfying.

Still, I can’t bring myself to say that this was a truly great novel. Is this because I’m holding it to a higher standard than something I picked up randomly in the used book shop? Or because my idea of “great” includes a level of originality that I didn’t find in this tale? Or am I just a curmudgeon, reluctant to agree with the masses?

I really don’t know. I’m glad that I read Where the Crawdads Sing. I’d recommend it as engrossing and intelligent, with a number of cogent lessons. I guess I will give it five stars. But I must apologize because I didn’t “absolutely love it”. Your mileage may vary.

Posted by Lisabet Sarai at 6:08 AM