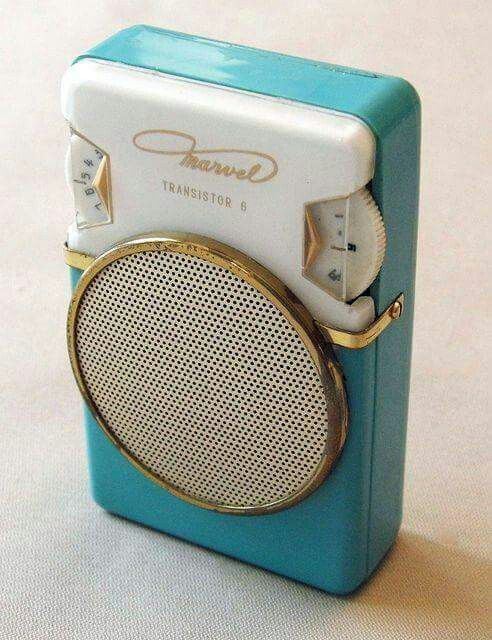 When I turned ten, I got a really special birthday present, something that I had wanted for months: a transistor radio. It was a box of orange plastic about the size of two cigarette packs, with circular grating over the speaker, a thumb wheel for selecting channels, a faux-leather carrying case and a silvery retracting antenna. I thought that it was the coolest thing I'd ever seen. It had seven transistors!—cutting edge technology for the period. I used that radio to listen to the Beatles, who were just rising into public view. Sometimes, though, I would just sit it on my desk while I was doing my homework and look at it. I couldn't believe it was mine.

That was the last time I fell in love with a piece of technology. As I matured, my studies and my career involved me with various high-tech mechanisms: tachistoscopes and gas chromatographs and of course, all sorts of computers. It was easy for me to see that these machines caused as many problems as they solved. I didn't hate technology, and I certainly didn't avoid it, but I was wary. Technology had a nasty tendency to fail just when you needed it most.

My first laptop was a used IBM Thinkpad with eighty megabytes of disk space and 256K of RAM. I used that computer to write my first novel, Raw Silk. I liked the Thinkpad (which I christened “Descartes”) quite a lot; it was simple, reliable, and had a great keyboard, making it easy and comfortable to type. It weighed a ton and didn't stay up long if it was unplugged, but that was okay. Mostly I didn't need to be mobile. And for my writing, I certainly didn't need something state-of-the-art. Still, when it finally started to die, I replaced it without a pang.

Today, I have a range of gadgets: two cellphones, a tablet, a digital camera, a desktop computer, three laptops that I use for different purposes, and a now-obsolete hand-held GPS receiver we used to use for those trips off the beaten track that so amuse my husband. I have 4G Internet on my phone, but I almost never use it. I don't do mobile email or video or chat or photo-sharing or anything else of that sort, though since the pandemic I do use Zoom on a laptop for my teaching and my meetings. I choose my technology on the basis of function and cost, not fashion or hype. I'm amazed and a bit appalled by the way some people's self-perceptions are determined by the tech stuff that they carry. It's a bit scary. If one of these kids had to choose between saving the life of his best friend or his iPhone, what would he decide?

Then there's the Internet. When the Internet started to become popular, I didn't trust it. I swore that I'd never become dependent on it. I continued to hand-write personal letters to friends and family. I rejected the notion of Internet banking as risky and unnecessary. I used to shop from printed catalogs, filling in the the order forms longhand and sending them by post. I didn't want to find myself in the situation of where I couldn't live without an Internet connection, because I knew how fragile the hardware and software infrastructure really were.

Then I moved overseas and everything changed. I'm dismayed to realized that at this point, living without the 'Net for an extended period would be completely impractical. I pay my bills using the 'Net. I keep in touch with friends. I follow the news. I send e-cards and order gifts for my remote family. My writing career would be dead in the water if I couldn't interact with publishing sites, communicate with my editors and my colleagues, do research, and promote my work using websites, blogs and email lists. The Internet has become as critical for me as electricity.

I'm not happy about this. Generally the network here is moderately fast and reliable, but every so often we lose connectivity for a few hours. By the time it comes back, I'm like an addict; I'll drop everything else to jump online and check my email. A few years ago some undersea cables that form the backbone of the Asia/United States network were severed by an earthquake, creating an outage of several days. I was completely frantic until service was restored.

Clearly I had it right, back when I was determined to remain independent. But what can you do when you live half a world (and a twelve hour time difference) away from the people you need to connect with?

I can deal with new technology. I can even appreciate the incredible advances in capabilities that have become available in a matter of just a few years. But for me, technology is just a tool. Gadgets will not make me beautiful, sexy or rich. I remind myself of that whenever I feel a slight twinge of lust for something new, shiny and battery-powered.

When my brother and I were young kids, we used to make these things we called, for some obscure reason, “time limits”, out of paper, cardboard, bottle caps, ice cream sticks, or whatever other materials came to hand. A time-limit started out as a watch. But then we'd augment it, á la Dick Tracy, adding (fake) functionality: a radio, a television, an intercom, a camera, even a phonograph. (I remember cutting little circles out of paper and labeling them with the names of the classical records my dad used to play.) We found these all-in-one portable gadgets incredibly exciting. The notion of being able to watch television or listen to music anywhere really intrigued us.

I was reminiscing recently with my brother and pointed out that these days, cell phones and smart watches were basically the equivalent of our time-limits. As my grandmother used to say, what is the world coming to?

I've been thinking, though. You know what would be really cool? To have a phone that looked like my cherished transistor radio.

Now that would turn some heads!

My family calls me Luddite, and I encourage it. My worst nightmare is having to ask my husband, the engineer, how to do something. He'll shove me out of the way, his fingers will flash across the keyboard, then he'll sit back triumphantly, saying, "See how easy?" Uh, nope. Then I'll sit at the keyboard and make him walk me through every step. When he says "click on that" I ask, "right click or left click?" Since he's dyslexic, half the time he tells me the wrong one! Totally frustrating.

Of course there are things I do much better than him--baking, sewing, crocheting--but none of them involve making anyone any money, or communicating--so they don't strike him as urgent for him to learn.

I got my first cell phone when my oldest son went to middle school. I refused before then. But he has Type 1 Diabetes, and I needed to be accessible--I used to go to his grade school to check his blood sugar myself at lunchtime when he was younger--we live across the street from the school. But a middle-schooler does NOT want his mom coming to school to see him--God forbid anyone would realize he has a mom! LOL.

And even now I still have a flip phone. I refuse to get a phone that's smarter than me--and that expensive--and addicting. I'm happy just with texting and phone calls. I do my on-line stuff when I get home.

Mom wouldn't let me get her a debit card when I had to take over her finances because of her dementia. She'd read something years ago about them being unsafe. Husband's mom didn't want him to put her bank account on-line, saying it would invite theft. He tried to explain that everything about her is already on-line, and letting him see it is actually safer, since he can easily keep an eye on her money that way.

As my late father-in-law said once, he was born into a time of Victrolas. Before he passed away, he had an Ipod and a laptop. He'd look at his grandchildren and marvel at what was in their future, that we could only dream about now.

And yet, no matter how sophisticated our technology gets, we're still the scared little hairless monkeys fighting each other for resources. Technology evolves MUCH faster than the users.

I knew you'd resonate with this post. It's a balancing act - privacy versus convenience, functionality versus dependence.

I *am* an engineer, at least by experience if not by education. That only makes me more aware of the risks. Since I write software, I know that every program has bugs, some of which can be literally fatal.

In the old days (like ten years ago), I used to assume that obfuscation and multiple accounts would ensure privacy/anonymity. No more - machine learning can find patterns and make connections that formerly would have been impossible. The only solution is to keep flow of your private data into the public world as minimal as possible.

Meanwhile, I have an idea for a scifi story in one of my notebooks. The core plot is that the Internet goes down, world wide. And only the geezers are able to function!