An alien hybrid and a banker save the world! ... #Giveaway #SciFiRomance #99cents @keri_kruspe 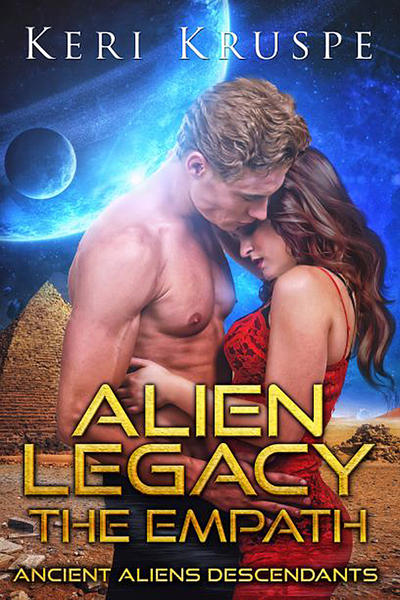 The aliens we thought were long gone are coming back.

Just his luck, alien-hybrid Ben Duncan is the only one for the job. Being an empath and a financial wizard, he’s called in to uncover an essential ally at a small regional bank in Vegas to thwart a plot his alien ancestors, the Akurns, seemed to have started there. If their heinous plans are successful, the global economy would crash and weaken mankind for their invasion in less than five short months. When Ben arrives at his assignment as a covert consultant, he meets the intriguing Julienne and is instantly alarmed at the intense attraction he has for her. He’d love to indulge in his obsession with the delectable woman, but knows he has no choice but to stay as far away from her as possible. The fate of billions don’t leave time for anything personal.

As senior vice-president, Julienne King leads a stressful life immersed in organizing a huge merger for a local bank in Vegas. And meeting some arrogant, hotter-than-hell, aloof outside consultant makes things worse. When she stumbles on an insidious money laundering scheme that threatens the global economy, she’s caught and kidnapped by one of her hateful bosses. While in captivity, she’s threatened with alien experimentation, death, or both. But what shocks her the most is it turns out she may not be who or what she thought she was.

Now it’s a race against time. Can a banker and an alien-hybrid overcome their misconceptions and to not only work together, but to realize their love is the key to mankind’s salvation?

Crap on toast! She’d never seen such a gorgeous man in the flesh before.

Her mouth dried. He had to be in his early thirties, around six foot two or three, with curly dark-blond hair styled in a professional cut. The thick lashes around his light-blue eyes contrasted with the dark tan of his skin. He had a slight overbite, giving him a boyish look around full, lavish lips. Which was a stark contrast to the masculine cleft in his chin.

She sucked in her bottom lip while she scanned down his expansive torso. A costly gray silk suit molded a fit, trim body that no tailor had to hide. His conservative red tie and Italian dress shoes completed the outfit. He screamed high-priced and exclusive. If this man was a banker, she was a cheerleader for the Vegas Golden Knights’s hockey team.

She bit that lip. Damn, every woman in the bank would be hot after this guy.

Yeah, and she’d be first in line.

After the man and Claude exchanged greetings, her boss turned to introduce her. With a flourish, he waved between them.

“This is Julienne King.” He clasped his hands behind him and nodded to the younger man. “Julienne, this is Ben Duncan.”

Her hands twitched, eager to touch any part of his flesh. Whoa, where did that come from? Shrugging off her inappropriate urge, she let a goofy smile plaster her face.

Then the man, Ben, did a strange thing. He leaned toward her with a slumberous half-lidded gaze. 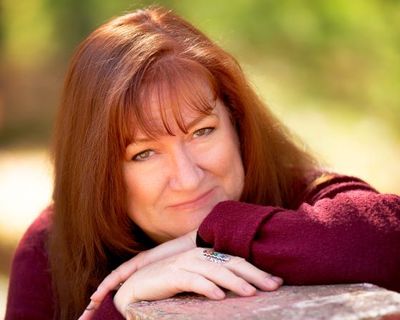 Keri Kruspe, award-winning “Author of Otherworldly Romantic Adventures” loves nothing more than to write about romances that feature “feisty heroines who aren’t afraid to take a chance on life… or love”. Her writing career started when she became irritated that most SciFi romances had women kidnapped before they could find love. Determined to create something different, she turned “the alien kidnapping trope upside down” (Vine Voice) and the ALIEN EXCHANGE trilogy was born.

A native Nevadan, Keri is a lifelong avid reader who lives in Northwestern Michigan with her hubby and the newest member of the family, a Jack Russell Terrier named Hestia. When not immersed in her made-up worlds, she enjoys discovering the fascinating landscape of her new home and pairing red wine with healthy ways to cook. Most of all, she loves finding her next favorite author.

If you want to know when Keri’s next book will come out, please visit her website at http:/kerikruspe.com, where you can sign up for her mailing list. You’ll get a FREE copy of the novella, The Day Behind Tomorrow that is a prologue to the ALIEN LEGACY series. Not to mention being kept updated on the life of a dedicated, obsessed author.

The book is on sale for $0.99 on Kindle or Nook during this tour.

Keri Kruspe will be awarding a $20 Amazon or B/N GC to a randomly drawn winner via rafflecopter during the tour.

I’m so excited that my newest series is hosted on this blog! I will check in from time-to-time to answer any questions folks may have. Because this book is loosely based on the Ancient Alien theory, my question is “Do you believe aliens visited us in the distant past? Or, better yet, are even now visiting Earth?”

Welcome back to Beyond Romance. This sounds like a luscious bit of wish fulfillment...

Do I believe aliens visited us in the past? I wouldn't be surprised. There are lots of historical phenomena that would be much easier to explain if this were true.

Yes, I believe they have. And we're probably carrying some of their alien DNA, which gets classified as "junk DNA" because we don't know what it is or what it does. Sounds like a great read!