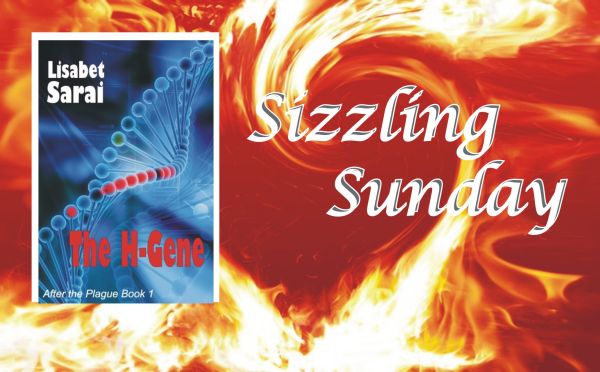 When love is forbidden, the whole world’s a prison

After a gay plague killed millions and sparked brutal riots, the Guardians locked up all H-positive men in remote quarantine camps – including Dylan Moore. H-negative guard Rafe Cowell blames the lust he feels watching prisoner 3218 on loneliness and isolation. When he finally meets the young queer, he discovers that Dylan is brilliant, brave, sexy as hell — and claims to be in love with Rafe.

“Relax,” said Dylan. “Sit down.” He seated himself on the bench, the polished wood cool against his bare buttocks. Like an automaton, Rafe did the same. The black man kicked off the biohazard gear. For a moment they simply stared at each other.

Dylan felt his nipples tighten and his cock lift under the guard’s scrutiny. It really was lucky the guy was so attractive. It made everything easier.

He could read the emotions shuttling across Rafe’s face. Hell, the guy was an open book. The anger was mostly gone. Now fear, guilt and lust battled it out on those noble features. Dylan sat quietly, holding Rafe’s eyes, his own cock growing harder with every passing second.

Rafe’s nostrils flared. He breathed through his mouth, panting as though he was running a marathon. His gaze flicked down to the rod of flesh rearing up from Dylan’s groin.

“What do you want?” he asked finally, his voice almost a whisper.

He leaned forward, brushing his lips across Rafe’s. The other man started. Dylan seized the guard’s shoulders and pulled him into a fierce kiss. Rafe did not resist. In fact, he opened his mouth to allow Dylan’s questing tongue inside.

Exultation flared in Dylan’s heart. Still devouring the guard’s mouth, he slid his hands down Rafe’s massive biceps and then over his solid chest, pulling at the Velcro that kept the shirt closed. The guard’s skin was smooth, warm, and moist with sweat. Dylan’s fingers skimmed over the patch of tight frizz between Rafe’s breasts, then fastened on one fat nipple. Rafe gasped, grabbed Dylan’s head, and deepened the kiss.

This was almost too easy. Dylan cupped the huge bulk of Rafe’s erection, trapped inside the tight trousers. “I want to see you naked,” he said, close to Rafe’s ear. “Please, baby…”

Rafe abruptly broke the embrace. Damn. Had he moved too fast for the homophobic guard? Rafe turned his broad back to Dylan and shucked off his shirt. Dylan licked his lips at the sight of the muscles shifting in that sleek, chocolate brown expanse. Rafe kicked off his boots then yanked his pants down to his ankles. Finally he peeled off the gloves and tossed them onto the concrete floor.

When he faced Dylan again, his eyes were glowing coals. His cock rose like a pillar of basalt between his powerful thighs. His abdomen rippled as he sucked in breath. He was magnificent, like some ancient god. Dylan wanted to worship him.

Sinking to his knees in front of the naked guard, Dylan kissed the glistening bulb of that formidable cock, tasting soap and sweat. He was about to swallow as much of that engorged length as he could manage when a heavy hand gripped his skull.

“No,” Rafe commanded. “On the bench. On your hands and knees.”

Dylan hastened to obey, his lust almost smothering his sense of triumph. He presented his rump for Rafe’s inspection, spreading his thighs as much as he could, given the width of the bench. His cock twitched when Rafe palmed one buttock. He nearly came when the man spread those cheeks, exposing his rear hole. He held himself still, struggling for control, as Rafe ran a spit-moistened finger up and down his crevice.

He’d be tight. It would hurt. Nobody had taken him there since Miguel had died, years—centuries—ago. And Rafe was so huge—but Dylan knew he could bear it, for the sake of his plan. In fact, the thought of that enormous cock ripping into him made him harder than ever.

Dylan expected violence. Based on their last encounter in the control room, he expected the guard to force his way into Dylan’s ass. He was astonished when, instead, he felt the wet prodding of the other man’s tongue wriggling against his sphincter. The slick pressure sent tendrils of electricity spiraling through him to tighten around the base of his cock. After a blissful while, the tongue was replaced by a careful digit pressing into his hole, circling, massaging, luring him to relax. He arched back, opening himself to the second finger that Rafe had inserted. Rafe pushed deeper, spreading his fingers to stretch the ring of muscle. Every movement transmitted itself to Dylan’s cock.

Rafe did not speak. Dylan heard him spit. The probing fingers were replaced by a rounded mass Dylan knew was Rafe’s cock head. The guard rubbed the bulb back and forth over the loosened entrance. Dylan shivered at the sensations. The man was driving him crazy.

Steady pressure built at his rear entrance. Dylan’s muscles screamed in protest as Rafe’s cock breached him. Then, in the wake of the pain, pleasure rushed in, full and deep, as deep as Rafe’s prick buried in his ass. Dylan clenched around the invading bulk, reveling in the sensation of being filled. Rafe pulled partway out, then slid smoothly back in to the hilt. Dylan felt the weight of the other man’s balls swinging against his butt cheeks. Oh, God, it was good, so good…

Dylan sank down onto his elbows, elevating his ass and allowing Rafe to plunge deeper. The guard thrust steadily, hard but not too hard, exactly the way Dylan craved. A big hand reached around his hips and squeezed his cock. He whimpered, overcome by the pleasure.

Dylan knew he didn’t need to answer. He wasn’t sure that he could. He felt fingernails scoring his butt flesh as Rafe picked up the pace. The guard rammed his cock into Dylan’s hole, again and again, each stroke more savage than the last. But Dylan was ready now, warmed up, loose and hot and hungry for whatever the guard dished out.

Posted by Lisabet Sarai at 5:09 AM