Review Tuesday: Midnight in the Garden of Good and Evil #Savannah #Murder #ReviewTuesday 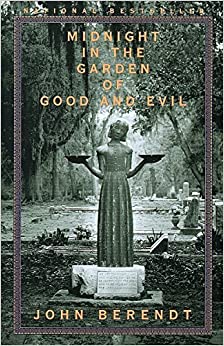 Midnight in the Garden of Good and Evil by John Berendt

When it comes to my reading life (which is a significant part of my life overall), I frequently rely on literary serendipity. True, my “want to read” list on Goodreads rivals my “read” list in length, but it’s rather rare that I deliberately go out and buy a specific book. Far more often, I’ll stroll through a second hand bookstore, waiting to be grabbed by a cover, a title or a first paragraph.

About a month ago, I was fortunate to be snagged by Midnight in the Garden of Good and Evil, which turned out to be one of the most insightful and entertaining books I’ve read in quite some time.

John Berendt’s “non-fiction novel” was hugely popular when it was first released in the mid-nineties. I’d heard the title, but aside from a vague notion that it was set somewhere in the American South, knew nothing about it. In fact, I’ve never read anything quite like this book. The author, a veteran journalist from New York City, visits the quirky, historic city of Savannah, Georgia, and falls under its distinctive spell. As fascinated by the people who inhabit its graceful mansions as by the ghosts interred in atmospheric Bonaventure Cemetery, Berendt relocates to Savannah, where he immerses himself in the city’s customs, rituals and intrigues.

His book introduces us to the colorful, often contradictory figures who populate the elegant squares for which the town is famous: white-haired Southern belle Mary Harty, who brings the author to the cemetery for cocktails; charming ne’er-do-well lawyer Joe Odom, expert at occupying fancy houses that don’t belong to him, making money off tourist tours, and throwing outrageous parties; Emma Kelly, the lady of six thousand songs, who crisscrosses Georgia daily, playing free piano for anyone who needs music, be it for a wedding, a church service, or a bar; Minerva the conjure-lady, who casts spells and communes with the dead, trying to convince her deceased witch-doctor husband to give her a winning lottery number; and my favorite, the Lady Chablis, a gorgeous, mouthy drag queen who calls herself the Empress of Savannah.

The centerpiece of the plot – if a non-fiction book can be said to have such a thing – is the never-ending saga of Jim Williams’ trial for murder. Williams, a wealthy antique dealer who owns one of Savannah’s most celebrated mansions, is accused of having murdered his violent, volatile young lover Danny Hansford, a self-styled “walking streak of sex”. William’s repeated trials (four of them!), full of forensic incompetence and dirty dealing, provide a structure for the book. However, Berendt takes frequent detours, telling everyone else’s stories along the way. Some tales are ludicrous, others pitiable. Along the way we learn a bit about Savannah’s history, geography, internecine conflicts and race relations. By the time I’d finished the book, I felt as though I’d lived in the town, as though I’d recognize the characters if they passed me on the street.

One of the most remarkable aspects of the book is Berendt’s apparent ability to elicit trust and confidences from everyone he meets. As a Yankee and an outsider, he should have been treated with suspicion or at least reticence, but in fact he finds that everyone wants to share Savannah’s glories and shames. Jim Williams and Minerva take him on a midnight visit to the graveyard, to gather dirt for her conjuring on Jim’s behalf. Black beauty Chablis relies on him to be her “white chauffeur”. Feuding preservationists on both sides insist on airing the town’s dirty laundry. He even gets invited to the Black debutantes’ ball, a highly ritualized affair established by Savannah’s Black community leaders as a counterpoint to the lavish all-white Cotillion.

Somehow Berendt managed to keep a low-profile, fly-on-the-wall persona for nearly seven years, which allowed him to get to know Savannah’s unique society in surprising depth. Then, with equal skill, he has shared the city’s remarkable presence with his readers, spinning real-world personalities and events into an account easily as compelling as any fiction.

I was sorry when I finished Midnight in the Garden of Good and Evil. I wanted to go back.

Get yourself a copy and you’ll see what I mean.

I totally agree about Midnight in the Garden of Good and Evil. That was a summer read for me soon after it came out. I loved it. What I was most amazed about was that it was written by a travel writer but he did a fabulous job of not only making us feel like we were in Savannah with him but enabled us to get to know the characters and their emotions as well. Had a few laughs too. Also made me want to give Savannah a good visit too, rather than just passing through on the way to Florida. :-)