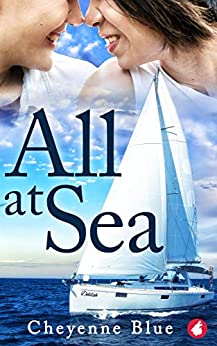 All at Sea by Cheyenne Blue

Stephanie “Stevie” Sterling comes from a wealthy, powerful family, but she’s determined to make her own way in the world. Recently accredited as a registered nurse after three years of intense study, she’s about to start the job of her dreams, working with elders in a highly respected care home. Stevie doesn’t share her parents’ values. Still, it would mean a lot to her if they’d recognize her accomplishment, instead of dismissing her nursing career as a phase and waiting for her to meet the “prince” who will give her a happily ever after. They refuse to listen when she explains that will never happen – that if anything, she’s hoping to meet a princess.

Karin “Kaz” Malone is trying to save the world. A dedicated environmental activist, she doesn’t hesitate to risk her freedom, even her life, trying to thwart companies who dump nuclear waste into the ocean or build coal mines in sensitive ecosystems. Kaz closed down her successful software company and refurbished a used sailing yacht so she could participate in the dangerous but satisfying protests of the Ocean Rights organization. To Kaz, the earth unquestionably comes first, a priority that undermined her last serious relationship with her co-activist Alana.

A twist of fate brings these two very different women together, sending them on a dangerous but thrilling voyage across the Australian sea which changes both their lives. Alone on a small boat in the middle of the ocean, they gradually come to trust and appreciate one another. Still, once they’re back on land, it’s not clear whether the attraction and respect that have grown between them can survive the pull of their divergent goals.

All at Sea is another sensitive, nuanced lesbian romance by Cheyenne Blue. Romance ultimately aims to satisfy the reader’s fantasies, but Ms. Blue never makes her HEAs too quick or too easy. Stevie and Kaz are complex, realistic and likable characters whose relationship develops in a believable way. The erotic heat builds gradually and it’s clear that, as in the real world, the attraction is not just physical. Kaz watches Stevie learn the discipline of sailing and comes to realize the woman who stowed away on her boat is far more than just a spoiled, drunk party girl. Stevie is furious that Kaz puts Ocean Rights above everything – including Stevie’s first job as a nurse – but grudgingly begins to admire the other woman’s courage and commitment as she faces down a formidable foe.

The novel is as beautifully written as everything I’ve read by Cheyenne Blue, and Ylva’s production is flawless. The scenes on the boat, particularly, are gorgeous, vivid and moving. I love the sea, though I’m not much of a sailor. I could easily identify with the sense of freedom and awe the two women feel when they’re together on the Delilah.

If you enjoy feel-good lesbian romance that doesn’t insult your intelligence, set in a society where LGBTQ rights are well-established though not necessarily accepted by everyone, I recommend All at Sea.