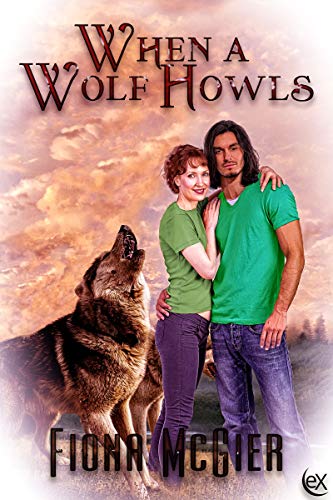 When a Wolf Howls by Fiona McGier

Saoirse McColl has a mind of her own – and that gets her into trouble. A research biologist, she has been fired by several labs because she refused to fudge her data to match the desired results. Unemployed and disillusioned, she’s temporarily staying with her best friend Freddie in his Boston apartment, while she tries to find work that won’t require her to surrender her principles. The listing for a science teacher at a private school in Maine seems like a long shot, but she figures she has nothing to lose by applying for the job.

Somewhat to her surprise, she discovers she loves the beautiful and remote Northwest Maine Academy, perhaps because most of her students and colleagues don’t fit in to so-called “normal” society any better than she does. She’s especially drawn to the school principle Diego Vargas, and to her delight the attraction seems to be mutual. When she discovers the secret the Academy exists to hide, however, she wonders whether her intense connection with the handsome, virile Latino could possibly have a future.

The sprawling, luxurious Academy shelters the were-pack along with their non-were mates and associates, in an environment close to nature where their wolves can run free. Once Saoirse recovers from the shock of meeting Diego in wolf form, she’s forced to recognize the powerful emotional and carnal bond between them. Their fairy-tale romance takes a darker turn, however, as she comes to understand what is expected of her as the mate of the new pack leader.

Most of the novel is presented from Saoirse’s point of view, with occasional shifts to Diego as well as secondary characters. I think I would have preferred to stay in Saoirse’s head the entire time, as the shifts (no pun intended) are somewhat disorienting.

I had one complaint about the writing. The author uses long internal monologues, where Saoirse is effectively talking silently to herself, for exposition of past action and back story. I found this device a bit annoying.

Overall, though, When a Wolf Howls is warm-hearted, genuine, creative and arousing. Saoirse’s a fantastic heroine, a strong woman who’s ready to fight for justice, her own safety, and that of the people she loves. She’s definitely well suited to be Diego’s mate.

Thanks so much for such a comprehensive review, Lisabet! Since I admire your writing, it's doubly encouraging for me to hear you say you enjoyed reading my stuff. This is one of the longest books I've ever written--over 100,000 words. But the sequel that comes out this Friday is even longer. The editor told me it qualifies as a "saga." The sequel continues the 2 romances from this book, and introduces two more. It's called "Worth the Wait," because all of the characters have to have patience to get what they want the most. I hope readers who enjoy this first book will continue on the journey with me, and enjoy the sequel as well. Thanks again!