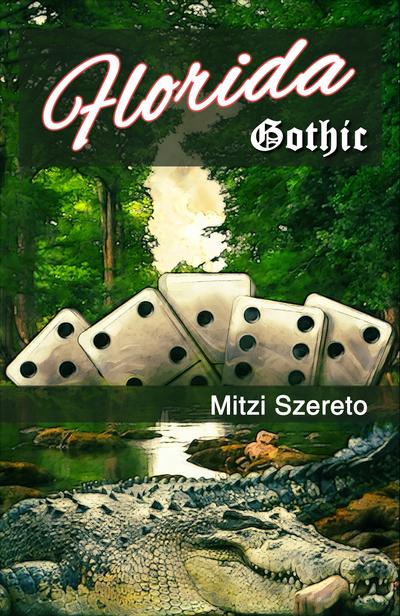 Bestselling multi-genre fiction author Mitzi Szereto returns with an eerie, gritty, gory and raunchy tale of death and revenge in Florida Gothic, the first of an all-new series of horror novels!

Stuck in a twilight world between life and death…

A hit-and-run driver leaves Ernesto Martinez to die by a Miami canal. Then an alligator comes along to finish the job.

Most of all, he thinks about injustice.

The meth head ex-con living in the Everglades. The judge enjoying retirement on the Gulf Coast. The son of a Colombian drug kingpin partying in South Beach. These men care nothing for the pain they’ve caused. But they’ll soon know what it is to feel pain.

(Book #1 in The “Gothic” Series of standalone horror novels from Mitzi Szereto.)

Dusk spreads its steamy cloak over Ernesto’s Little Havana neighborhood. Watchtower pamphlets lie scattered on the rubber welcome mat along with pieces of junk mail that fell out of his mailbox. The pile also contains a soggy notice from the post office informing him that his mail will be held at his local branch for thirty days, after which it’ll be returned to the sender if not picked up. The notice is dated three weeks after Ernesto’s death.

It feels strange leaving the house.

Ernesto pauses on his front porch, listening. The neighborhood offers all its usual sounds: dogs barking, children playing, people bickering in Spanish. The steady hum of traffic coming from Southwest Eighth Street is suddenly interrupted by the blast of a car horn, followed by an angry shout. “¡Cabrón!” Everything’s pretty much as it should be…

…Except for Ernesto, who doesn’t belong here among the living. But other than his missing arm and mangled leg, he seems to be in better shape than ever. His hearing’s sharper and so is his eyesight, which, prior to his death, was in a depressing state of decline. Even in the fading daylight he can see things clearly—the letters and numbers on the license plate of Gonzalo Hernandez’s Ford parked across the street; the rain-blurred type on the post office notification lying on the doormat; even the phone number on the lost dog flyer stapled to the electricity pole. It never occurred to him that being dead would have so many benefits.

Taking a deep breath to fill non-functioning lungs, Ernesto leaves the safety of his front porch and merges with the thickening dusk. He walks with a lopsided gait, his damaged right leg dragging behind him like an appendage that doesn’t belong to him, yet still insists on being there. His pace is slow, but determined. He doesn’t think about where he’s going. His feet have a mind of their own as they lead him farther away from his street and his neighborhood. A troop of palmetto bugs trail behind him like foot soldiers, their wings clicking with excitement. Like Ernesto, they’re also tired of being cooped up in the house.

Soon Ernesto finds himself back in familiar territory. Here the streetlights are less likely to function due to the occasional bullet. Here the residents lock themselves inside their homes after sundown, too frightened to go out or speak to their neighbors unless they share the same skin color. Here the children don’t play in their yards and are instead confined to their bedrooms. This isn’t a friendly or welcoming place. If his sense of smell still functioned, Ernesto would notice that it even smells different here, though that might be the canal, which stinks of more decay than usual, like the inside of an old crypt no one ever visits.

Suddenly he hears voices. Their brusque and jerky cadences are jarring, at times aggressive. Usually when Ernesto hears voices like these he gets frightened and goes in the opposite direction. But tonight he feels no fear.

I wish you luck with the book!

Creepy and fun! Thanks again for the book spotlight!