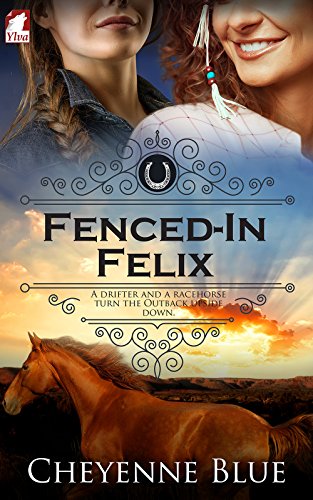 Felicity Jameson—Felix—is struggling to turn the land she inherited from her parents into a viable living. With horseback rides, camp sites and two new cabins that have drained her savings, she’s hoping to attract tourists seeking a genuine Outback experience to her sprawling Jayboro Station.

Building the business takes a huge amount of time and energy. Felix tells herself she doesn’t have room in her life for a relationship. When she encounters the flirtatious and curvy new barmaid at the town pub, though, she can’t help wishing things were otherwise.

Josie Beccari has spent years moving from town to town across Australia, picking up what work she can. Her job tending bar at the Commercial is just another gig, until she meets Felix. She’s strongly drawn to the rangy, independent owner of Jayboro Station. At the same time, she recognizes that Felix may be able to help her with a practical problem. She asks Felix to board her horse Flame, a retired thoroughbred no longer fit for racing.

Felix senses there’s something strange about this arrangement, but between her attraction to Josie and the money the woman is offering, she agrees to Josie’s plan. Although Felix is wary, the two women become friends. The more time she spends in Josie’s presence, the more Felix wants her as a lover, but she remains unsure that she can trust the mercurial, mop-headed drifter.

In this novel, Felix comes across as younger, more insecure and more vulnerable. Almost all her energy is consumed by her work at Jayboro Station. Though she’s comfortable acknowledging her sexual preferences, she’s surprisingly skittish about relationships. Still, I felt I understood her motivations and her fears.

Josie is more of a cipher. One wonders what set her on her drifter’s path. I didn’t really get a sense of who she was, though I could see why Felix would find her attractive.

While the author may stint on the sex, she doesn’t hold back in describing the setting. Her love of the Outback shines in the luminous pictures she paints of the land’s harsh beauty.

I think I enjoyed this book more because I’d already read Never-Tied Nora and Not-So-Straight Sue. Nora, Sue, Geraldine and Moni all show up in this book, for a happy reunion. It was great fun seeing them again, and appreciating how their relationships had matured. At the same time, the two couples from the previous novels serve to throw Felix’s uncertainties into sharp relief.

If you are looking for well-written lesbian romance with a strong sense of place, I can recommend Fenced-In Felix.