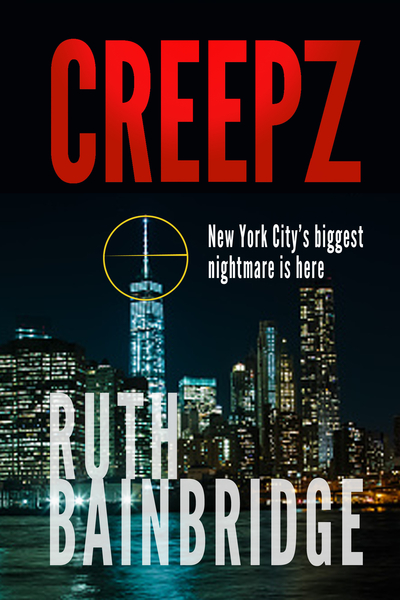 June 2017. New York is suffering under the worst heatwave in centuries, but it’s the barrage of grisly murders that has city dwellers on edge. Since the homicides don’t fit a pattern, the NYPD is treating them as unrelated, but Detective Grace Jarrod isn’t so sure. Graffiti left at the crime scenes points to the crimes being linked and part of a rampage.

The delivery of a cryptogram to her precinct proves her theory correct. A group calling themselves CREEPZ takes credit for the deaths and for the war they wage. They promise not to stop until a societal revolution is achieved. Jarrod leads the investigation and goes after the madmen that strike at will and profess to kill for love. Little does she know that the group of homeless drifters is led by a genius who believes himself God.

No one was expecting it … no one was prepared. The mild spring weather had lulled the denizens of the Big Apple into thinking it would always be that way. But before they knew it, the fantasy was swallowed by a rapacious heat that burrowed its way into the concrete and wouldn’t let go. And now? Now there was heat. Overbearing, suffocating heat that came up from the bowels of hell and melted the hardest of hearts, reducing them to sweat and then steam.

For two weeks, the people suffered under the sun’s merciless rule, and the weather forecaster’s oral fandango only promised more of the same. A burst of a turbulent red sky at sunset turned that threat into a reality as New Yorkers braced for another brutal repeat of today.

The day dwindled into twilight as the light was snuffed out by a phantom’s hand. A strong ocean breeze pushed the mugginess aside long enough to breathe. The beleaguered New Yorkers were grateful to have survived and sought solace in the blackness of the oasis offered. Apartment dwellers oozed into the streets in droves—all to enjoy the cooler evening temperature crowned by a silver moon tinged by the color of blood.

In the horde of people, the strange little man humming a tune went unnoticed. The crowd at 34th Street was enjoying itself too much to care about one more drifter … one more oddball that New York seemed to attract.

Ruth Bainbridge was born in the idyllic, sleepy town of Ithaca, NY, and has been a lover of mysteries for her entire life. Ever since a child, she’s consumed detective stories at regular intervals, becoming enamored with all the superstars of crime. She loved matching wits with Hercule Poirot, Miss Marple, Thomas Pitt, Lord Peter Wimsey, Richard Jury and Edward X Delaney. In fact, she was so inspired by their brilliance that she began trying to emulate her writing idol's achievements by composing her own short stories. However, life interfered with her plans of becoming the next hopeful to try a life of crime--on paper at least. But the empty nest syndrome happened and gave her the impetus to return to her first love--murder.

Her works include: THE CURT SAVAGE MYSTERIES (a four-part series that should be read in order); DEADSPEAK, a detective Twin Peaks; and ONLY ONE WILL FALL, the first in THE NICK CROSS MYSTERIES. CREEPZ is her eighth published work. The most intense read of the season, it’s a complex adrenaline rush that’s filled with suspense.

Thanks for hosting! Readers, the book is on sale for only $0.99!

Lisabet - Thank you so much for featuring my book CREEPZ! Hope everyone enjoys this!

What do you find your muse for your writing?

Definitely a very creepy set of excerpts in your media kit. It was hard to choose.

Good luck with the book! (And the tour.)

Such a great story idea.