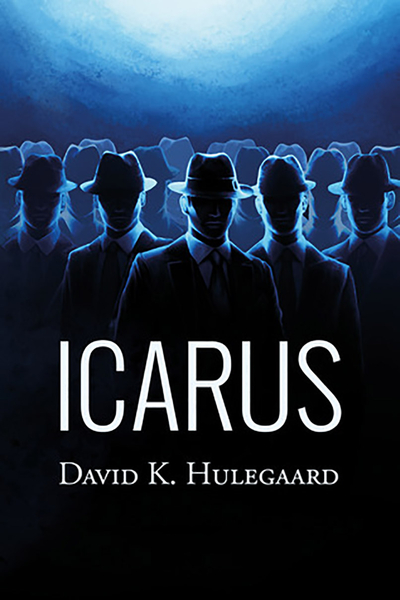 It’s the winter of 1947 in Ashley Falls, West Virginia, and a teenage girl has gone missing. Local private detective Miller Brinkman takes the case, quickly uncovering a string of bizarre clues. A hidden diary, cryptic riddles, and buried secrets all pique Miller’s interest, but one key detail gives him pause: the girl’s parents haven’t reported her disappearance to the authorities.

As the case deepens, Miller’s investigation begins to poke holes in the idyllic picture of his beloved hometown. No longer certain whether anyone in his community can be trusted, Miller dives headfirst into a desperate search for the truth that extends far beyond the borders of Ashley Falls. He soon discovers that his missing persons case is not an isolated incident, but part of an otherworldly mystery—one that, if confronted, may threaten the very future of humanity.

First, seventeen year old Jane Emmett disappears from Ashley Falls, West Virginia. A rebellious young woman often in conflict with her parents, Jane might well have run away from home, but if that’s true, there’s no trace of her, aside from some cryptic poetry and a pocket watch that clearly belongs to someone else.

Next, Jane’s best friend Jessie Fryman is found dead at the foot of the cliff that gives the town its name. The town sheriff plans to pin the murder on Miller Brinkman, a mild-mannered private eye whom Jessie had consulted about her missing friend. Sheriff Coleman knows Brinkman isn’t the culprit, but the sheriff has a score to settle. Besides, the lawman is somehow mixed up with the shadowy “men in black” who seem to have caused Jane to vanish.

Brinkman is a man with a strong moral compass, and more courage than he gives himself credit for. Despite his agoraphobia, he leaves Ashley Falls, where he has spent his entire life, to follow clues left by Jane and Jessie. His gut tells him there’s something sinister going on and he’s determined to get to the bottom of the situation, even though it puts him in mortal danger.

He expects to find something peculiar, but the horrible truth about Jane’s fate is far beyond anything the sheltered PI could possibly have imagined.

Icarus is a brilliantly suspenseful novel with a unwitting but winning hero. Miller Brinkman thinks he’s ordinary, a small town guy who will never amount to much. However, he’s intelligent, intuitive, surprisingly brave, and above all, good. He pursues the question of Jane’s disappearance and Jessie’s murder not because he’s being paid by a client, not for the intellectual satisfaction of solving a puzzle, but because he senses some dark fate has swallowed her and maybe others.

From the first pages, I was sucked in to the mystery. We know from the prologue that Jane has been abducted, but we have no idea by whom. As the book progresses, though, it becomes clear that her kidnappers are both determined and vicious. I couldn’t guess the real story, despite many hints.

David Hulegaard does a great job bringing both Brinkman and post World War II America to life. In those times, a train trip from West Virginia to Baltimore was a major journey. Hulegaard makes you feel the distance. The writing is generally excellent, as is the editing (something I really appreciate in an indie novel). The story flows smoothly, propelled by Miller’s almost heart-breaking quest for justice. In fact the PI loses what he holds most dear before he solves the mystery.

I have only two complaints about Icarus. First, though the build up is amazing, the truth about Jane’s fate struck me as far-fetched, even contrived. Although I knew that the book was labeled as science fiction, it reads more like a who-dunnit until that point. The change was a bit disorienting. Second, although the dialogue overall struck me as excellent, Sheriff Coleman’s speeches were rendered in an incredibly irritating dialect:

Coleman stepped away. “Head back to the station, and when ya get there, leave yer badge on my desk.”

I rubbed my throat and coughed.

“Yer days as deputy are done,” he said with his back to me. “And a word of advice: forget any of this ever happened, and don’t ya ever come ’round my station again. It’d be a cryin’ shame if ya ended up like Benny.”

I have a feeling that the author wanted us to remember that Coleman was a black man. However, this really rubbed me the wrong way. No other character in the book has this sort of extreme accent.

Overall, though, I greatly enjoyed reading Icarus. Indeed, the book left me eagerly awaiting the next novel in the series, because I really wanted to know more about Alyssa Noble.

Well, you’ll have to read the book and find out for yourself.

Jessie stalled in the doorway, studying the parking lot. She turned her head left to right several times, conducting a sweep of the area.

I plopped a coin on the table and joined her. “Is everything all right?”

“It’s probably nothing.” Jessie adjusted the book bag on her shoulder. “I think my mind’s playing tricks on me. Earlier I thought I saw… Oh, never mind.”

“I don’t know. I thought maybe I was being followed on the way here from school.”

“Followed? Did you see someone?”

“Well, I didn’t get a good look or nothing, but I could’ve sworn I saw a man in a black suit behind me. Sort of keeping a distance, you know?” Jessie said. “But when I got here, he was gone.” She covered her eyes. “Gee, it sounds like I’ve read Jane’s journal one too many times, huh?”

I chuckled, though it was more from nerves than humor. “Tell you what, Jessie: how about I walk you home? I’m headed that direction anyway.”

I reached into my coat pocket and felt the familiar shape of my Colt revolver at my side. “Nope. No trouble at all.” 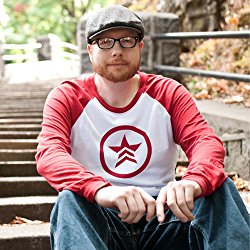 David K. Hulegaard is an American author and paranormal investigator. His Noble trilogy has garnered comparisons to the works of Philip K. Dick and Stephen King. In 2016, he collaborated with best-selling author Tony Healey on the novel Planet of Ice.

David previously worked at BioWare, a premiere video game development studio known for creating the popular Mass Effect and Dragon Age franchises. He now lives in the Victorian seaport town of Port Townsend, Washington with his wife Jennie, and their banana-obsessed Welsh Terrier Tobi. In his spare time, he enjoys video games, professional wrestling, and photography.

David Hulegaard will be awarding a $25 Amazon/BN GC to a randomly drawn winner via rafflecopter during the tour.

Congrats on the tour and thanks for the chance to win )

I'm glad to welcome David and his book to my blog. I loved the character of Miller Brinkman. David, are the other books in the series available? If not, when will they be?

I'm looking forward to this and have on my "TBR" list!

I have been a fan of David's for a while now. I can't wait to read his latest.

Thank you so much for hosting my book, and for the wonderful review!

@Lisabet Sarai Thank you! The Invisible War (book 2) is available now, and book 3 should be out in September.

@Kim - I appreciate that very much! I hope you'll enjoy it.

@Misty - Aww! Thank you so much. That means the world to me.

Congrats on the tour and thanks for the chance to win

I would love to read your book and review it.Patricia wright

I love sci-fi! This book sounds amazing and I can't wait to read it! Good luck on the tour and thank you for the awesome giveaway!

I love your cover and would love to read your book.

@Patricia - I'd love that, too! Drop me a line sometime: hulegaardbooks@gmail.com

@Carole - You're so welcome! Thank you for stopping by to check it out, and good luck.

@Bridgett - Aww, thank you! The cover was designed by a very talented friend of mine in Germany, Eve F. I'm so happy that she was able to create all three covers for the trilogy.

Enjoyed reading the excerpt. Sounds really interesting. Thanks for the giveaway chance.

I've enjoyed following the tour for Icarus and I'm looking forward to reading it. Thanks for sharing the excerpts and posts along the way :)

A great review thank you & I love this cover.

What is your favorite book of all time? Thanks for the giveaway. I hope that I win. Bernie W BWallace1980(at)Hotmail(d0t)com

Loved the blurb and excerpt. Looking forward to reading "Icarus." Thanks for hosting.

I was really enjoying following this tour, thank you for all the great blog posts and excerpts!

I have enjoyed following this tour and look forward to checking out this book!