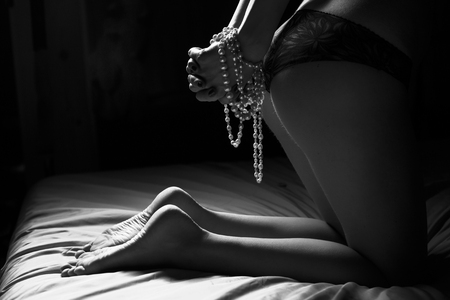 Give me your body.

Give me your mind.
Open your heart.
Pull down the blind...

My head encased in fat 1970's era headphones, I hear only the music, but I understand that he is speaking to me through the lyrics. He's behind me, towering over me, his big hands resting on my bare shoulders as I listen to the album he has brought me as a gift, a British group called 10cc. I feel my heart pounding in my chest, in time with the bass. I don't know what he'll do next. The uncertainty is disturbing and thrilling.

His fingers trace a path along my upper arms, light, teasing, raising goosebumps. Then they lock onto my nipples. I gasp as he pinches hard, then twists. I remember what he told me about clamps. What he promised. He knows what I'm thinking—I'm sure it is just what he intends. I imagine his smile, behind me, full of gentle mockery.

I'm soaked and trembling. I am mortified by my own desires, desires I hardly knew I had until he exposed them and showed me who I really was.

His slut. His slave. We both know it, know that I'll do anything he asks. I trust him not to ask for more than I can bear to give.

Did he somehow recognize my latent submissiveness? Or was he initially just attracted by my ripe body and raging hormones, only later starting to wonder if my fantasies were the complement to his? He was my classmate in grad school. We used to flirt, but I never took him seriously. Then he left the university for a job on the far coast, and we began to write.

Postal seduction. Asking me how I felt about spanking. Sharing his desire to tie me up. Discoursing on homemade whips and the efficacy of birch switches. I pretended lightness, laughed off his outrageous suggestions, but they left their mark on my psyche.

He would call me late at night and tell me his plans for me, his intuitions about what I wanted. Did he plant my fantasies or simply lay them bare? He claimed that he was meant to master me, to open my eyes to my own perversity. Arrogant and charming by turns, he wooed me, instinctively pressing all the right buttons—buttons I didn't know were ever there. Finally, he invited me to come visit him over Thanksgiving.

Never having even touched him in a sexual way—rash, crazy, my inflamed imagination totally trumping my rational self—I agreed.

It was the best decision I ever made.

The first night, we had vanilla sex. The next night—Thanksgiving night, more than thirty five years ago—was something else entirely. We tumbled together into a well of dark fantasy. He led me through a magic door into a world of intense sensation and raw emotion, power and surrender, trust and communion. Looking back, I'm still astonished by that sudden connection—so real and so true despite the fact that we were practically strangers.

He changed me forever.

Our lives ran in different tracts. We lived thousands of miles apart. I had other lovers, though he had a way of slipping into my head when I was in their arms, reminding me to whom I really belonged. When we managed to meet, our days together were a frenzy of kinky experimentation: leather belts, bungee cords, ping pong paddles, hot wax. Ultimately, though, it wasn't the physical sensations that bound me to him. It was the sense that he saw me as I was, as deviant and sluttish as he himself, and didn't condemn me. No, he liked what he saw. I could be truly naked with him; he would not condemn me. From the very first, I trusted him with my body and my fantasies. Eager to please him, I exulted when he shared his own and allowed me to fulfill them.

Our relationship wasn't easy. We were both too young to realize the value of what we had, I now believe, or to nurture it the way it deserved. Misunderstandings, recriminations—we drifted apart, and three years after our initial incandescent coupling, I married someone else.

Yet all these years later, we are still in touch, and I still consider him my master, though he would laugh bitterly at the epithet.

I have tried to branch out, to explore other paths through the tangled forest of erotica. Still, dominance and submission, power and surrender, remain the themes that fascinate me the most. Sometimes I feel as though I'm writing the same scene over and over. My readers will certainly be bored. Not me, though. I'm breathless and wet as I relive those magic encounters of my youth.

Here's a short piece dedicated to him, which perhaps says more than all the discourse above.

They meet, infrequently, to perform the ritual. She waits for him to arrive, heart slamming against her ribs, stomach twisted with nervousness. When he enters, they embrace, awkwardly. It has been so long. She attempts lightness, a joke, a jibe, pretending that she does not know why she is here. Then he gives the sign - a mere eyebrow, arched in a question - and her protective humor slips from her along with her clothing.

The ritual demands much of them, the steps choreographed, but always with room for improvisation. First he binds her, with rope, or silk, or leather, ceiling-hung with thighs spread, or splayed across the bed, or bent double over a hassock. Sometimes he will position her limbs and bind her to stillness with his command alone.

Then he teases her, dabbles his fingers in her wetness, lovingly mocks her sluttishness. She melts at his slightest touch, sinks liquid and helpless into the ritual spirit, moaning just as he intends. She could drown in his rich voice, nuanced and full of power. He pinches her nipples into aching peaks, captures them in clothespins, or cinches them with rubber bands. All the while he strokes her pussy, calls her his pet, muddles the pains and the pleasures besieging her.

Next, he beats her. Here the ritual has many variants, but all with a single purpose: to invoke the purity of her surrender. She writhes under the lash, twists away from the hairbrush, whimpers as his bare palm reddens her buttocks. She does not wish to resist him; her only thought now is to please. But the pain is difficult to endure. Breathe, he says, soothing, encouraging, even as he scourges her. Open yourself. Yield yourself to me once again.

His voice is the key that unlocks her. Some barrier shatters and she floats free, each stroke of the whip an ecstatic kiss. His mind moves with hers now, sharing her agony and her joy. His breath comes in gasps like hers. His organ is granite. Now, come to me, my love, he whispers, entering her front or rear or spraying her marked thighs with his burning seed. She obeys, sliding into climax as he slides inside her, white hot fringed with red streaks of the pain.

Transcendence. Communion. Completion. They do not speak of it as they dress. There is no need for speech when the ritual is complete.

They meet infrequently. Sitting alone, on the plane or the bus taking her homeward, she savors the gaping, twitching sensations in her rear hole, the sharp echo of her stripes as she shifts in her seat, the slickness, still, in her sex. His voice echos in her mind.

Theirs is an old love. She thinks of him daily, imagines his life, her chest swollen with bittersweet aching. He thinks of her less frequently, but when he does, he gnashes his teeth, driven almost to madness because he cannot possess her. Then he recalls her sweet pliancy, her willing debasement, and his lips curve in a smile as he strums on his cock.

The ritual renews them. When she lies in a dentist's chair, or on the surgeon's table, when she wakes in fear in the night, she remembers him. Breathe. Open. Surrender. She relaxes into the fear, trusting as she trusts him.

She is sure that she will think of him, that way, when she surrenders herself into the arms of death. And then, perhaps, their meetings will be more frequent, and the ritual will be perfected.