An Assault on the Senses (#guestblog #india #giveaway @DianneNoble1) 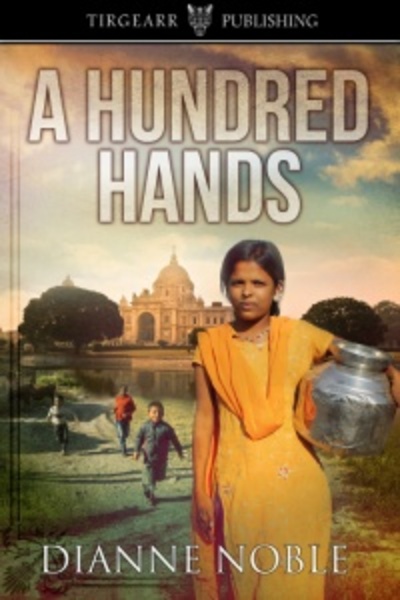 India is an assault on the senses.

My shirt sticks to my back as I edge round a goat, swatting at flies, coughing as the smoke from pavement cooking fires catches in my throat. After four hours of threadbare sleep I’m fighting my way round Kolkata, India, trying to find the group of street children I’m here to teach English to.

The noise makes my ears hurt – shouting, blaring of horns, backfiring buses. A cow stands in the road, munching impassively on a discarded newspaper, and traffic edges round it. This creature is holy. If a driver were to run into it he would be dragged from his car by an angry crowd and beaten up. The heat beats on my head like a hammer as I search among blackened buildings whose stonework crumbles like stale cake. I smell spices and sewage and urine evaporating in hot sun.

That must be the place. It takes me an age to cross the road, weaving between rickshaws, yellow taxis, tuk tuks festooned with dusty tinsel. The children are so tiny – malnourished – with bare feet, cropped hair and laddered ribs, but they shriek with laughter when I try to speak to them in Hindi. They stroke the pale skin of my arms and clamber on to my knees as I sit, cross-legged and crampy, on the bare earth floor. They are a joy, desperate to learn English, desperate to improve their position at the bottom of the luck ladder.

When I get back to my small room that evening my feet are gritty and blistered, my chest is raw with exhaust fumes and I’m filthy. Sweat makes white rivulets down the dirt on my face and I feel, and doubtless smell, rank.

By the end of my first week I’m overwhelmed by the magnitude of the poverty, despairing at the smallness of my contribution.
How can I possibly do this for three whole months? Whatever had I been thinking of?

I start a journal and at the end of every day, no matter how tired I am, I write down every detail of my day – how the children are progressing, who made me laugh, how much their poor chests rattle, who has the worst sores. It’s a sort of de-briefing and I find it cathartic as I realise that I’m surrounded every day by happy, smiling children. I hear laughter everywhere I go in this dreadful place and the Bengali men and women get used to seeing me, wave and call out ‘Hello, Aunty’ (a term of respect for women of a certain age!) At the wayside shrine even jolly, elephant-headed Ganesh wears a broad grin.

My diary covers three months and forms the basis for A Hundred Hands, which tells the story of Polly who saw the plight of the children living on the streets and stayed to help.

When Polly’s husband is jailed for paedophilia, she flees the village where her grandmother raised her and travels to India where she stays with her friend, Amanda.

Polly is appalled by the poverty, and what her husband had done, and her guilt drives her to help the street children of Kolkata. It’s while working she meets other volunteers, Liam and Finlay. Her days are divided between teaching the children and helping with their health needs. But when Liam’s successor refuses to let Polly continue working, she’s devastated to think the children will feel she’s abandoned them.

After a health scare of her own, she discovers her friend, Amanda, is pregnant. Amanda leaves India to have her child. At this time Polly and Finlay fall in love and work together helping the children. Tragedy strikes when one child is found beaten and another dead. Polly feels history repeating itself when Finlay becomes emotionally attached to a young girl.

Can Polly recover from her broken heart and continue to help the children, or will she give up and return home?

She sat cross legged with her elbows pressed into her sides, trying to be as small as possible. Inches above her head hung a sheet of blue plastic, to her left a wooden upright post dug into her arm and on her right were wedged two tiny girls who gave her shy looks from under dark lashes. Right in front of them pedestrians bustled and traffic roared by. She tried to take shallow breaths so the exhaust fumes wouldn’t set her off coughing again.

‘Do they go to school?’ She made namaste to the girls who giggled, nudged each other, wriggled in the narrow space.

‘No, Aunty, they are finding food.’

Polly smiled at them and they lowered their eyes, whispering to each other.

‘When I am learning enough,’ Bapi continued, ‘I am getting job and taking care of my family.’ His skinny chest puffed out with importance.

The woman looked up at him from the pot bubbling on a small heap of coal and spoke.

‘My mother have no English.’ It was difficult to hear him above the baritonal honks of lorries. He squatted in front of Polly. ‘I am teaching her. My sisters also.’

Bless him, shouldering the responsibility for them all.

His mother moved to his side, nodding, smiling. She pushed a plastic dish of rice into Polly’s hands and waited, beaming, gesturing for her to eat.

Polly looked down at the steaming, fragrant Basmati rice, studded with cardamoms. She really didn’t want food. Her chest had begun to hurt again. She looked at the girls and Bapi. Not eating. There was only food for her.

With clumsy fingers, she moulded rice into small balls and pushed them into her mouth, making appreciative sounds, fixing the smile on her face.

The woman and the three children watched her every move, opening their mouths when she did, smiling and nodding at her apparent enjoyment. Not good at eating with her fingers, grains of rice kept falling to the ground. Oh God, not only am I taking all their food but I’m wasting it as well. Her throat began to close. So hard to keep swallowing and maintain the smile. They all clapped their hands when she had finished and his mother bowed her head.

‘No, thank you, Bapi, and thank your mother for me. Tell her it’s the best rice I have ever eaten.’

A few words from the boy and a flush spread across her grey cheeks.
The rice sat like a brick in Polly’s stomach. What would they all eat tonight? Could she buy something for them? Could she give them some money? No, of course she couldn’t. She must allow them their dignity.

Oh bloody hell, there’s more. The smallest girl was bringing her a drink from the standpipe. The beaker brimmed with water. Now what do I do?

You drink it, that’s what you do. Not all of it but at least half, and put your faith in your typhoid jab.

Bapi insisted on escorting her to the bus stop. ‘My mother is happy,’ he confided. ‘She is saying honour that you come. Is correct word, Aunty?’ He looked up at her.

‘Yes, it’s the right word. But tell your mother that the honour is all mine.’ 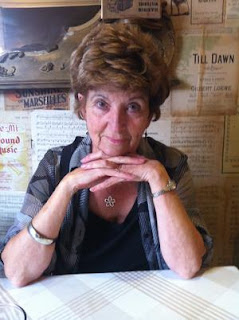 I was born into a service family and at the tender age of seven found myself on the Dunera, a troopship, sailing for a three year posting to Singapore. So began a lifetime of wandering – and fifteen different schools. Teen years living in Cyprus, before partition, when the country was swarming with handsome UN soldiers, and then marriage to a Civil Engineer who whisked me away to the Arabian Gulf.

Most of the following years were spent as a single parent with an employment history which ranged from the British Embassy in Bahrain to a goods picker, complete with steel toe-capped boots, in an Argos warehouse. In between I earned my keep as a cashier in Barclays, a radio presenter and a café proprietor on the sea front in Penzance.

My travels have taken me to China, Egypt, Israel, Guatemala, Russia, Morocco, Belize and my favourite place, India. I keep copious notes and constantly dip into them to ensure my writing is atmospheric.

Don't forget to enter my giveaway, by the way. Just use the Rafflecopter widget below.

a Rafflecopter giveaway
Posted by Lisabet Sarai at 5:17 AM

Amazing story and excerpt, Dianne. I'm so pleased to have you share it on my blog.

I've done quite a lot of traveling myself. I live in Asia. It's always difficult to handle the disparity between my own abundance and the scarcity I sometimes see (though the country I live in is pretty wealthy).

I had a friend who just returned from India. She said the same basic things.

Fascinating post. It really makes you think. The story sounds great. Thanks for the chance.