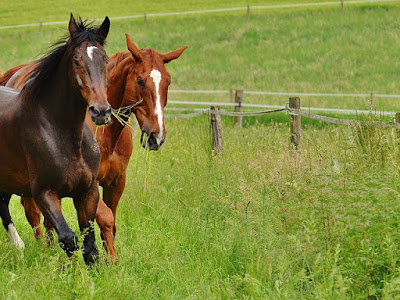 Like so many girls, I was a horsy kid. Model ponies, pony stories, racing around pretending I was Jill from the Jill books, or Callie from Follyfoot, and living for my weekly one hour ride at a local riding stables.

When I was thirteen, I was old enough to work at that same stables. No money, but I would work from 7am to about 4pm, just for the pleasure of being around horses and the chance of a free ride at the back of a string of beginners. I did it for the joy of it. For frosty mornings, bringing ponies in from the field, muddy legs and rugs astray, breath huffing in the winter air. For the pleasure of grooming my favourite horse in a dusty stable, hard muscles under my brush, horse hair floating in the air. When the horse would turn its head and lip at the buttons on my shirt, all soft whiskery muzzle and molasses breath. Sometimes, he’d pull those same buttons off, leaving me to sew my shirt together with the waxed thread used to repair saddlery. There was never a safety pin when you really needed one.

And the freedom. Incredible amounts of freedom. If you’ve felt the anticipation of a gallop, of keeping an excited horse reined in as you jog down to the corner, and you know that once you turn the corner and the long stretch of green opens up in front of you, you will ease the reins and the horse will take off like a rocket, and there will be mud and turf and the wind in your face, movement and laughter and the wild and free feeling of the gallop.

Horses taught me hard work too. Long hours of physical, smelly, sweaty work. Menial jobs: pulling ragwort from a paddock, mucking out stables, leading a beginner around and around a schooling ring. The joys of an outdoor life, the harshness of weather. That it’s better to use a body in a physical way than let it soften. And of course, horses taught me about facing fear and that you can do things you never thought possible.

I haven’t ridden for years now. Moving around, work, other interests meant it was pushed to one side and eventually faded. But sometimes, I still dream of horses. I dream I’m galloping, or just spending quiet time with a horse, scratching them under the mane, the gentle shuffle of hooves in straw, that warm and rich smell.

Writing my latest lesbian romance, Fenced-In Felix, brought a lot of that remembered pleasure back. Talking the language of horse, the terminology, and writing my main character Felix, her horses and lifestyle, was a wonderful experience. Felix lives in outback Australia where horses are primarily working animals. But as in so many places around the world, rural workers and horses share a close bond.

I hope you take a moment to check out Fenced-In Felix and spend some time with Felicity (“Felix”) and Josie and their lives in outback Australia. Felix is not just about horses though. It’s an Aussie romance set in outback Queensland, and as well horses, there are kangaroos, snakes, goannas, and dogs. It’s a story of friendship, trust, rural living, horse riding, hard work, moving on versus staying put, racehorses, mauve pants, campfires, billy tea and damper and, at the heart, whether love and trust go hand in hand.

Felix is the third book in the “Girl Meets Girl” series—standalone novels with interconnecting characters. You don’t need to have read the others in the series to enjoy this. I hope you’ll give it a red hot go.

By the way, I'm giving away a free copy to one person who leaves a comment. Tell me how you feel about horses... and be sure to include your email address in the comment text, so I can find you if you win! 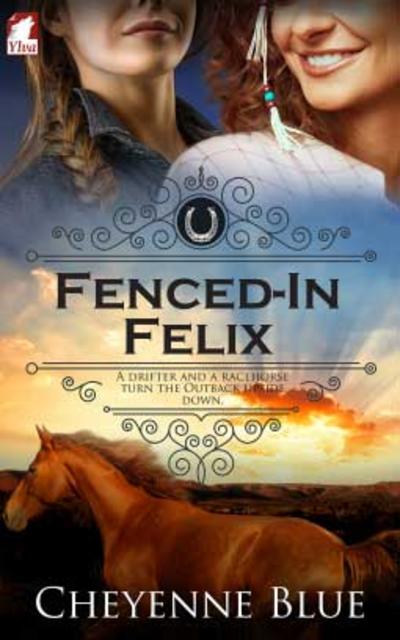 Felix Jameson is working hard to get her outback hospitality business off the ground. Building cabins, leading trail rides and enticing tourists means she hasn’t much time for distractions—and that includes romance. But when she meets Josie, a drifter who picks up casual work as she goes, Felix is intrigued and attracted.  Josie asks Felix to board her horse, Flame, and Felix is delighted. Not only can she use the extra money, but it means she will see a lot more of Josie. Felix finds Josie fits in well into her life, and for the solitary Felix there’s finally the possibility of romance. But there’s something suspicious about Flame, who bears an uncanny resemblance to a valuable stolen racehorse. Felix knows she is falling hard for Josie, but is Josie all she seems, or is she mixed up in shady dealings?

I had two horses to do to Josie’s one, so she finished first. She came over and rested her arms on the edge of Smoke’s stall.

“You’ve got plenty of space here. You could have half a dozen more horses.”

I bent to brush dust from Smoke’s foreleg. “Barn space, yes, but the land is poor. It barely supports the six I have now.”

“How many have you had in the past?”

“Nine was the maximum, back in the days when I took youngsters for breaking. But that was during the good years, when we had proper wet seasons.”

“Word is this year could see some good rains.”

“Let’s hope. Can never rely on it though. I’ve seen the land go for years without real rain, and I’ve seen it under a metre of flood water.”

I straightened. Josie leant on the door, fiddling with the thong on her hat.

“I want to ask you something,” she said. “Not sure what you’ll say.”

“Oh?” I tried to appear open. In truth, I had no idea what she wanted.

“I like it in Worrindi. The pub’s a good place to be. Nice people.” Her mouth crooked up at one corner. The motion was fascinating. “Believe me, that is not always the case.” Her fingers worried at the thong on the hat. “Anyway, I thought I’d stay around. A while. Maybe a lot longer, if it works out. I told you I have a horse?”

I nodded, my gaze on the restless movement of her fingers.

Flame. It conjured up a picture of a delicate, feisty horse, quick as lightning with movements of fire. But as tempting as the picture was, I knew I had to say no.

“She sounds like a beaut horse. But honestly, Josie, I don’t think I can have her here. I just don’t have the grazing. Most likely, I’m going to have to buy hay before long, and that’s very expensive.”

“I’ll pay for her agistment—I didn’t mean for you to keep her for nothing. I’ve thought about what I can afford.” She named a figure that was generous.

The money was tempting. With the extra, I could finish up the second cabin.

I shook my head. “That’s a good offer, but it’s more than you’d pay at other places. But I still don’t think I could do it if I have to buy hay.”

“If it comes to that, how about I purchase the hay for her?”

I ducked down to Smoke’s forelegs again to give myself time to think. The dollars marching through my head beat a compelling rhythm, but before I fell on Josie’s neck shrieking “yes!” I had to give this more thought.

“I’m a thirty-minute drive from Worrindi. It would cost you to drive out here, and you may not be able to come that often. I’m sure there is somewhere closer to town where you could keep her. If you want, I’ll ask—”

“No.” She leant forwards, and her face took on a strange intensity. “I want her to be here with you. If you’ll take her, that is. She’s special. I don’t want to trust her to just anyone. I can pay, if that’s what you’re worried about.”

“It’s not. I trust you.” And I did. I wasn’t just saying the words. For all her nomadic ways, Josie seemed like someone I could rely on. Maybe I’d wake up one morning with a horse that didn’t belong to me and no way of contacting the owner and no money coming in—I’d heard of that happening to others—but I didn’t think so.

“I can give you a month up front. I’ll transfer it to your bank if you agree.”

It was a lot of money for someone earning minimum wage less board in a pub. Maybe she had money put aside.

“If you take her, I’ll know she’ll be well looked after. Cared for. So many places just throw a horse in a paddock and forget about it until the next bill’s due.” Her head ducked, and she glanced at me from under her hat. “And it would give me an excuse to come out here. To see you.”

It wasn’t fair of her to play the flirtation card with someone who was obviously interested.

I stood up again, with Smoke between us, and rested my hands on her withers. “Look, I’ll think about it, okay? I can’t give you an answer now. I need to think about grazing, hay, and things like that.” And about you wanting to see me again. “Will Flame be okay in with the others? I don’t think it will work if she has to be by herself.”

“I’m sure she will be. Thanks, Felix, for at least thinking about it.”

She nodded, and with a quick smile, she walked off.

I watched her go, watched the sway of her backside under those mauve pants, and tried not to think about the fact that she wanted to spend time with me.

Fenced-In Felix is available now from Ylva Publishing and from 30 November 2016 from other retailers including:

Cheyenne has lived in the U.K., Ireland, the United States, and Switzerland, but now writes, runs, makes bread and cheese, and drinks wine in rural Queensland, Australia. Check out her blog at www.cheyenneblue.com and follow her on Twitter at @IamCheyenneBlue and on Goodreads at https://www.goodreads.com/CheyenneBlue

Welcome back to Beyond Romance, Cheyenne!

I am really looking forward to reading this.

Hope you get lots of comments... and lots of sales!

I think horses are beautiful. I haven't spent very much time with horses but I have always thought they are amazing. jepeb (at) verizon DOT net

My daughter used to ride and compete. She was quite good rider and I miss it. Unfortunately I am allergic to hay.
debby236 at gmail dot com

Congratulations to Jen B who was the random winner of an ebook copy of "Felix". Jen, your kindle file is on the way.

Thanks, Lisabet, for hosting me once again. :)