Sunday Snog #205: A Contract for Christmas

Speaking of which, I’m extending my release day contest to this post as well. Leave a comment and I’ll throw your name into the hat for one of two copies of the Halloween book. (Leave comments at both posts for two chances to win.)

When you’re done here, head back to Victoria’s place, where they’re celebrating Blissemas with lots of sexy excerpts and great prizes! 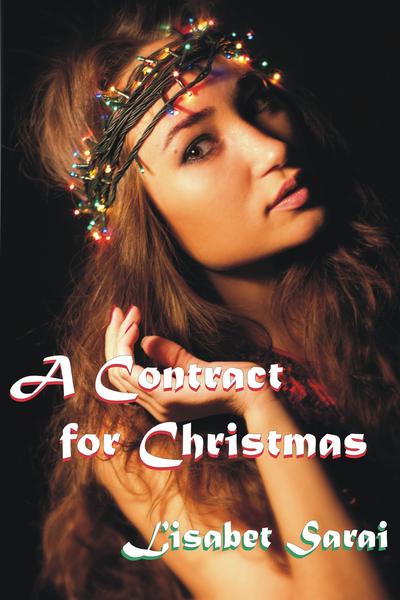 “What—um—James? What in the world are you doing here?”

Greg’s best friend—and our occasional partner in kinky games—flashed me a cheeky grin. “Can’t I drop by to wish my friends a happy holiday? I even brought a gift.” He handed me a tin decorated with a green and gold bow.

“Hey, it’s traditional.” He shrugged his shoulders under his snow-dusted down parka. “So, aren’t you going to invite me in?”

My thoughts whirled. I’d never been alone with James before.

“Uh—Greg’s not here. I mean, he was supposed to be home by now, but he got stranded in Chicago because of the blizzard. How is it out there, by the way?”

“Pretty bad. The wind’s so strong you hardly walk, and the snow’s so thick you can barely see. You going to force me to go back out there, Bella?”

He was already peeling off his jacket. “Mmm, it’s nice and toasty in here.” Taking my arm, he drew me back into the apartment. His nostrils flared.

Oh no! He can smell my pussy. James knew me pretty well. Could he tell I’d just come? My discomfort deepened.

I released the breath I’d been holding. “Cornish hen, actually…I was going to surprise Greg with a special dinner, but then the storm hit—and, um, well, he’s stuck, like I said—and I’m—I’m all by myself, haven’t seen him for days—I miss him—miss him so much…”

To my mortification, I started to sob. And once the tears began, I couldn’t stop them. I stood there like an idiot next to the elegantly set table for two, clutching a fruitcake and crying my eyes out.

“Now Bella—don’t cry—he’ll be back soon…” James pried my fingers away from the tin and set it on table, then pulled me into his arms. “Hush, now…it’s all right…”

I buried my face in his chest, soaking his shirt. He held me close, smoothing my tangled hair, then running his hand down my back. I clung to him, his warm body immensely comforting after three days on my own. Gradually my hysterical weeping subsided.

“That’s a good girl. Greg wouldn’t want you to cry.” Two fingers under my chin, he raised my head so he could look at me. His familiar, boyish face calmed me further. I read sympathy and affection in the chocolate-brown eyes behind his glasses. “You have to be brave, Bella. And I know, from experience, just how brave you can be.”

Then, suddenly, somehow, he was kissing me. His mouth captured mine. His tongue slipped between my parted lips. I tasted coffee and peppermint as I opened further, surrendering to his gentle power. He tightened his embrace, one hand cupping the curve of my buttocks, the other stroking the tender side of my breast just below my arm pit.

As if he’d flipped a switch, I swung from self-pity to arousal. My nipples contracted to hard little bullets, crying out for stimulation. Heaviness gathered in my pelvis. Shameless, I ground my pubis against his lean thigh. Wetness soaked through my dress and into his jeans. For a moment I forgot everything but my need.

The solid length of his erection brushed my hip and brought me back to sanity. “No! James—please…” I pushed him away. “I—we—we can’t do this. Not if Greg isn’t here.”

He gave me a peculiar look. “We’re already lovers, Bella. I know you. Intimately.”

“But Greg’s my master. Without his permission—his orders—I can’t get involved with you. Please, try to understand, James. Before, he told me to submit to you.”

“So it was all only to please him?”

The hurt I saw in James’s eyes made me wince. “No, no, of course not. I want you. I care about you. Didn’t that kiss make that clear?”

“I was starting to wonder whether I’d misinterpreted…”

“I’ve enjoyed being with you, James. But with Greg—I belong to Greg. It’s different.”

He scratched his damp curls and shook his head slowly. “I wish you belonged to me, Isabella. Or to both of us. Because right now I want you more than anything.”