The Inspiration for Sated

When I saw the call for submissions that Totally Bound Publishing put out for their Wild After Dark anthology, I knew I had to give it a go. Paranormal ménage... what could be better? The next thing to do, of course, was to come up with an idea. In short stories, one thing I often struggle with is getting my characters into the required situation in such a short space of time, while at the same time keeping it plausible and not rushed. So, how did I get three characters into bed together, having smokin’ hot sex, within the required word count? 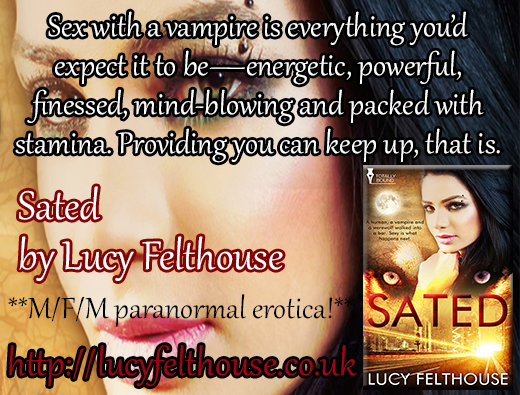 I don’t want to say any more because I’ll give the game away, but let’s just say Sated is fun, sexy, and also dark in places. I really enjoyed writing this naughty paranormal tale, and am delighted that it was accepted for publication, and that, so far, people seem to be enjoying it!

A human, a vampire and a werewolf walked into a bar. Sexy is what happens next. 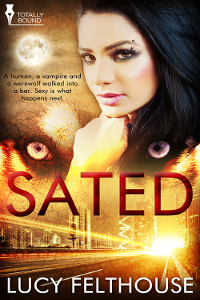 Since getting together with her vampire boyfriend, Ace, Aneesa is enjoying a sex life she could never have with a human. Ace has skill, strength, stamina…and is massively adventurous.

Barton is attractive, smart and sexy—almost too good to be true, in fact. Aneesa decides not to jump straight into things, but makes sure it’s what she truly wants. However, it turns out Barton’s not so easily dissuaded.

Pausing, then pulling me closer, Ace pointed across the room. The bar itself was L-shaped. We were parallel to the longer side, and just past the corner was the man that Ace was indicating. “That’s Barton. And I have never known that guy to be early for anything. Ever. Seems he’s just as eager as you.” He chuckled, then pressed a kiss to my hair.

A thrill shot through me—and not just from Ace’s proximity and that sexy chuckle. Even from a distance, I could see that Barton was gorgeous. He was the opposite to Ace in several ways—dark where Ace was fair, beefy where Ace was lithe, and yet he still pushed all my buttons. Visually, at least. It took much more than just looks for a man to float my boat, so I figured it was time to stop gawping and get over there and meet him.

I shrugged, despite knowing that Ace would see right through my feigned indifference. “Maybe he’s changed, Ace. People do that, you know. Come on, let’s get over there before we end up being late.”

Wisely, Ace chose to keep quiet and continued to hold my hand as we approached Barton. Not in a possessive fashion, but more of an I’m-here-babe-you’re-safe kind of way.

Barton swiveled on his barstool as we grew closer, then hopped off it, his hand held out. He gave me a quick smile before greeting Ace. “Ace, mate! How’s it going?” They shook hands, clapped each other on the shoulder, then broke apart.

Immediately, Barton turned to me. “Hey, Aneesa, I’m Barton. It’s great to meet you.” I shook his hand, enjoying the strength and warmth that he emitted. I noted how he was checking me out—in more of a curious than lusty way. I guessed he was trying to be respectful.

I gave a genuine smile. He was just as cute close up as he’d been from across the room. “It’s great to meet you too, Barton…” I tried not to cringe as I tailed off—it was obvious that I’d been about to say something else, but had decided against it. Mainly because the only two options my brain had supplied were ‘I look forward to getting to know you better’ and ‘Ace has told me so much about you.’

The first was cheesy beyond belief and, considering the reasoning behind our meeting, laden with innuendo. If I’d let that phrase come out of my mouth, I think I’d have died of embarrassment on the spot.

And so the awkward silence hung in the air for several seconds, before Barton recovered. Smiling, he said, “Can I get you a drink, guys? Aneesa?”

“Um, yes please,” I replied, regaining the ability to speak. A double vodka and Coke would have gone down a treat right then, but Ace and I had already agreed we were going to stay sober for this meeting—we needed clear heads to make decisions and to ensure that whatever happened next was influenced only by us, not by alcohol. “I’ll just have a Coke, please.”

With a quick nod, Barton turned back to the bar and attempted to get the attention of a member of staff. I took the opportunity to study Barton in greater detail without him knowing. Quite honestly, I really enjoyed what I saw. He was a tad taller than Ace, making him maybe three inches over six feet. Tight—but not obscenely so—jeans covered what looked like a very grabbable, bitable backside and thick thighs that were in perfect proportion with the rest of him. A narrow waist flared out to wide shoulders, encased in a short-sleeved T-shirt which showed off his physique. His arms, of course, were muscular, and looked as though even if he hadn’t been a werewolf, that he could throw me around in the bedroom. Mmm…

Make sure to follow the whole tour—the more posts you visit throughout, the more chances you’ll get to enter the giveaway.

The tour dates are here: http://www.writermarketing.co.uk/prpromotion/blog-tours/currently-on-tour/lucy-felthouse-14/

Thanks for the great excerpt....

Thank you for the great excerpt. It reminded me a bit of True Blood on HBO but better. Sookie never got it on with Bill and Alcide at the same time. Can't wait to read about Aneesa, Ace and Barton's exploits.

Congratulations on your new release! A Vampire and a Werewolf lucky girl!