Leaving the Sweatshop Behind

We’re hearing a lot more about “indie authors” and “indie publishing” these days. Although this has been going on for some time now, it has usually consisted of unknown or newbie writers giving away e-books for free or selling them for 99 cents. However, we’re now seeing an interesting shift taking place—specifically major name authors getting on board. You might ask why a bestselling author whom you’d expect to be raking it in should wish to go the “DIY” route. Well, when you consider that authors are among the very few working professionals that spend several months to several years creating a piece of work, only to earn a few paltry cents on the dollar in income from it, it’s a wonder that anyone even bothers with publishers (let alone literary agents) these days. The situation is particularly egregious when it comes to digital royalties. Although the so-called industry standard is still far too low, there are some authors being paid digital rates that are downright criminal. Unfortunately, I’m one of them.

Therefore I too, have joined the ranks of the Indie Author. For me, the indie publishing route isn’t just about getting a better return on my investment, though that’s still a very important part of it. It’s also about independence and creative freedom. It’s about having control over how my book is marketed and how it is perceived by the reading public. It’s about having full credit given to me for my hard work, rather than seeing that credit being mistakenly given to or hijacked by publishers, who (at least for my books) have nothing to do with the creation or editorial direction of the work, but merely handle the mechanics of it through to publication. Indie publishing is about freedom from exploitation. It means getting a fair deal rather than being the equivalent of a child in the Third World working all hours in a sweatshop while someone else pockets the profits.

I launched my first major indie project back in 2012 with Normal for Norfolk (The Thelonious T. Bear Chronicles)—the first in my quirky crime/cozy mystery series co-written with my celebrity sidekick bear, Teddy Tedaloo. I’m now pleased to announce the release of the second installment—Rotten Peaches (The Thelonious T. Bear Chronicles). The series features protagonist Thelonious T. Bear, who’s a pint-drinking, Mini-Cooper-driving British photojournalist bear (yes, I said bear!) who always seems to run into trouble wherever he goes. In the first book it was village pub landlords being murdered in Norfolk, England. This time it’s an armed gang of bank-robbing little people in the American South. Thelonious definitely has a flair for being in the wrong place at the wrong time—and with hilarious results! 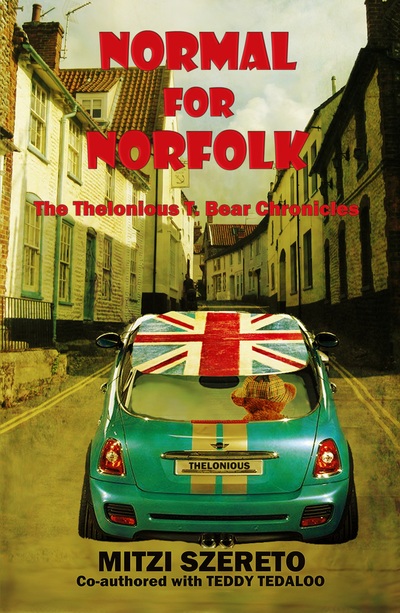 Now I’m not saying I’ll never work with a traditional publisher again. There are some good publishers out there and I’d be happy to work with them. But like many of my book-writing contemporaries, this time I’ll make 100% sure I’m getting a fair publishing deal—particularly with regard to digital royalties—before I place my hard work with anyone.

“Animal Dwarf Bandits” with Tommy Guns are on a crime spree in Georgia!

Dillinger-style bank heists are being committed by a dangerous gang of little people wearing animal masks. Enter ursine photojournalist Thelonious T. Bear. Still smarting from his misadventures in Norfolk, he’s eager to begin his assignment in the American South. However, Thelonious soon learns that the South isn’t all fried chicken and sweet tea. In between encounters with a trigger-happy farmer and a fire-and-brimstone preacher with a snake, he’s stalked by a man in a red pickup truck and nearly bear-napped by a family of hillbillies. Thelonious’s resemblance to one of the bank bandits puts him on the radar of Sheriff Maynard Grizzle and budding reporter Nate Jessop, both of whom are convinced he’s in the gang. As the robberies gain more media attention, locals smell fame in the air. Suddenly everyone wants in on the action. And Thelonious finds himself at the heart of yet another series of crimes! 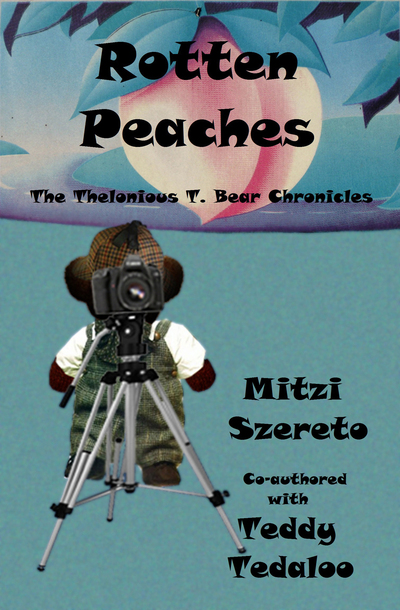 By late afternoon a tired and hungry Thelonious was ready to pack it in for the day—until he saw the ruined timber barn. It was set well back from the road in a field so long untended it actually seemed to consume the structure. An oak tree had fallen onto the roof, causing it to collapse. The tree was thriving and had even become part of the barn, feeding new life into something left to die. Parking at the edge of what once had been a driveway, Thelonious got out of the Mini. He stood for a moment perusing the site. Slinging his camera bag over one shoulder, he trundled forth into the overgrown field. A No Trespassing sign lay on the ground, covered over with weedy detritus. It was still attached to a chain that had fallen down between two rotted posts. He passed right by, never seeing it.

Thelonious photographed the barn from various angles, changing lenses as he saw fit. Although the weight of his camera bag was a nuisance, he dared not set it down for fear it would be swallowed by the overgrowth. Approaching the barn’s entrance, he noticed several bales of hay inside that had been left there to rot. Rust-covered farm implements lay scattered about both inside and out. He included them in some of the images, since they lent extra character to the scene. He even captured a triangle of sunlight coming through the barn’s collapsed roof as it returned the mouldering hay to its original golden splendour, zooming in when a mouse poked its head out to feel the sunshine on its whiskers. The light shifted and changed hue, adding shadow, depth and richness to his compositions. Had Thelonious’s attention not been caught by a ramshackle assemblage of containers off to one side, he might’ve seen the figure skulking in the shadows behind him.

A rusty metal cylinder with a triangular-shaped lid had been set up in a corner of the barn. An encrusted pipe had been attached to the top, the elbow joint bending it sideways connecting it to a worm-eaten wooden barrel; its remaining iron bands had turned green with corrosion. Glass jugs and jam jars lay strewn about on the dirt floor. Some looked as if they had mouse droppings on them. Thelonious’s nostrils detected the odour of fermenting grains. It appeared that he’d stumbled upon a moonshine still.

As Thelonious framed it in his viewfinder, he heard a loud explosion. A bullet whistled past his right ear, nearly taking his deerstalker hat with it.

A wiry old man with a shotgun stepped out from the shadows. He planted himself solidly behind Thelonious. A long scraggly beard hung from his chin; it would’ve been white if not for the dribbles of tobacco juice. Thelonious was pretty sure he saw things moving in it.

The ancient codger aimed the firearm at Thelonious’s chest, the brown sticks of his arms surprisingly steady as they stuck out from his tattered bib overalls. “This here’s private property!” he shouted.

Thelonious took a few steps back, feeling his bowels loosening. “I thought the barn was abandoned?” he croaked.

“Abandoned?” The old man spat into the dirt. “This here barn ain’t abandoned!”

“I must’ve made a mistake.”

“Ah’ll say y’all made a mistake! This here’s my farm!”

“Hmmph…” The farmer squinted hard at his intruder, his creased face like a dried plum above the beard.

Thelonious shifted the camera bag to his other shoulder. “I’ll just be on my way then.”

But the farmer had other ideas. He moved nearer, closing the gap between them. “Did that no ’count Bobby Ray Tuggle send y’all down here to steal my corn liquor?”

“No!” Thelonious shook his head until he thought it would fall off. The cosy relationship between the old man’s index finger and the shotgun’s trigger was making him nervous.

Hoping this was the end of it, Thelonious turned to go.

“Not so dang fast! Didn’t y’all see my ‘no trespassing’ sign?”

“Y’all walked right on past it. It’s thare, plain as day!” A skeletal brown finger pointed toward the barn’s gaping entrance. “C’aint miss it!”

“Ah shoot trespassers.” The farmer gave Thelonious a grisly brown grin. “Shot me one last year. He’s buried out back of the barn. Wanna see?”

Teddy Tedaloo is an author, celebrity teddy bear and the publisher and editor of The Teddy Tedaloo Times. He’s also a trendsetter, world traveller, and the production assistant extraordinaire/co-star of the web TV channel Mitzi TV. Popular in social media circles such as Facebook and Twitter, he’s known for his entertaining commentary and opinions as well as being an advocate for animal welfare. He lives (and goes) wherever Mitzi lives (and goes). He’s the co-author of Normal for Norfolk (The Thelonious T. Bear Chronicles). Rotten Peaches (The Thelonious T. Bear Chronicles) is his second novel in the series. 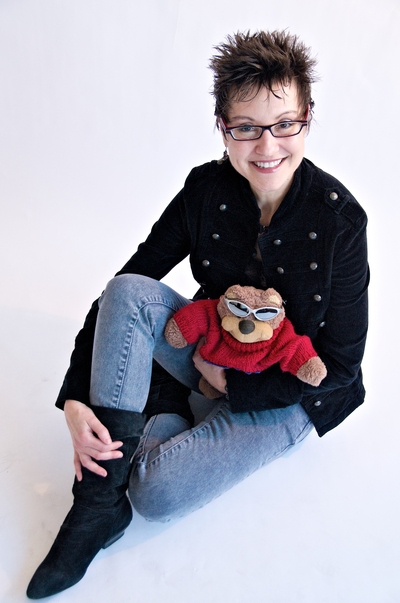 Kobo: https://store.kobobooks.com/en-US/ebook/rotten-peaches-the-thelonious-t-bear-chronicl
Posted by Lisabet Sarai at 3:00 AM

You and Teddy make quite a pair.

Aye, that we do! There's no stopping us now!

It's a shame that authors are like so many other of the working poor. Making poverty level wages for working hard at something they love. I'm glad there is a way for you to up your "wages". Too bad so many others, ie theme park workers, restaurant workers, cashiers, or big box workers, receive poverty level wages to raise their families on while the company big wigs earn ginormous salaries and bonuses from the hard work of their employees.

Thanks so much for stopping by. Yeah, being an author does not mean being rich and famous, believe me! But I guess it's more fun that working as a cashier or in a factory (though some of us do that, too).

Hope you enjoy it!