The Music Behind Go-Go Boys of Club 21

Go-Go Boys of Club 21: The Complete Series takes place in New York City’s hottest gay club. To write the story – the dance scenes, the love scenes, and all the drama – I listened to a lot of great music to get me in the headspace and get me motivated. Here’s some of the great music I listened to while pounding the keyboard – it might be the perfect music for when you’re reading through the book!

Bloes Brothers #28 – Möwe. The Bloes Brothers have a great channel on SoundCloud with hour-long mixes of addictive music. Möwe is just one of the many great tracks on there (#38 is another favourite of mine!) – so check this one out and then give some of their other music a listen, too!

Life Round Here – James Blake. When I need to slow it down a bit, but want to stay in the sexy mood, I turn of Armin Van Buuren and turn on some James Blake. Blake’s Overgrown album is perfect for maintaining the sexy vibes – the whole album (except for maybe the bonus track at the end) exudes sexiness and eroticism.

Let Me Go – Young London. I use this track to get me back in a playful writing mood, for when I don’t need to be so serious or sexual – it’s bouncy, it’s rhythmic, and the video is so colourful. Young London’s self-titled album is also gives me that kick in the pants when I need to get some writing work done. 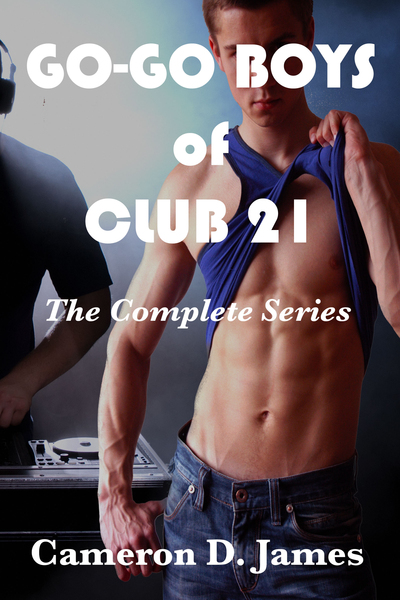 Club 21 is known across New York City for having the hottest go-go boys. They groove to the beat, fuel fantasies, and leave you begging for more.

Lance is the newest go-go boy. He took the job because he's infatuated with Liam and hoping for a chance to get to know him better, but only gets a broken heart as he watches Liam chase some guy he barely knows. As Lance pushes to get closer to Liam, he only pushes him further away.

As the beat goes on and the tempo changes, will Lance be able to win the man of his dreams? Or will Liam forever go off in search of new excitement?

Originally released as five separate stories, this volume at last collect the Go-Go Boys of Club 21 into one hot volume.
Buy Links

We’re the go-go boys of Club 21. We dance, we fuel fantasies, and we give ourselves to the beat. We bump, we grind, and before each shift we have a jerk off competition; the order in which we come determines who gets the most desirable dance platform.

Normally, I shoot first, earning me the prime spot by the DJ. Ken usually comes shortly after me; he claims I get him excited. Lance, our new guy, he’s always last and ends up with the crappy spot by the pool tables.

Today, I decided to try something different—a strategy, if you will—to teach Lance an important lesson about being a go-go boy. I yanked down the front of my shorts and let my cock hang out, then grabbed it in my fist, stroking up and down the shaft. In front of me, Liam and Ken stood with their shorts tucked under their balls as they pumped with vigor.

I held back, loosening my grip just a bit, but still keeping it tight enough to stay hard and throbbing. I grunted and faked an impending climax, hoping it would give the other guys incentive to rush to completion.

“Sorry, Liam,” Ken said as he came down from that high of orgasm. I doubted Ken was actually sorry—he was definitely the bad boy of our trio. He drank, partied, and had a high-octane sex drive.

He stuck his tongue out at me, then crossed his arms and watched Lance and I battle to the finish. I kept stroking, making my effort look convincing. Lance fixed me with his usual cocky stare. Lust glazed his eyes too, no doubt fuelled by the actions of his fist.

Lance had joined us three weeks ago and I didn’t know too much about him. He was a quiet jock, a much better fit than Aaron, the airhead twink who he’d replaced. Having a jock in our small group was good for bringing in more customers. Ken and I were well-toned and we all had boyish charm—it was part of the job, after all—but Lance’s body was hard and toned, and packed with an impressive array of muscle. And boy, could he dance.

I didn’t realize I’d stopped stroking until Ken said, “You planning on coming?”

I shrugged, letting go of my cock. “I don’t think it’s happening tonight...probably shouldn’t have tugged it this afternoon.”

Lance and I pulled up our shorts too. I smiled at him, trying to give my best look of sheepish defeat.

“Hmm...are you trying to teach me another one of your go-go boy secrets?”

I grabbed my thick bulge and gave it a shake for him. “See this?”

Lance looked down at my basket and bit his lip, then reached in his shorts and adjusted himself. “Mmm. I get it. Don’t come so you’ve got a bigger bulge.”

“The bigger the bulge, the bigger the tips, no matter where you dance. I’ll prove it to you. I plan to make a killing tonight. Tomorrow, you can try and do the same. I bet you’ll make more than your usual thirty-seven bucks.”

I looked at Lance—he would keep a straight face if I lied. “We’re talking about bulges,” I said.

“Oh...in that case, that’s definitely a bulge I like.” Ken grabbed the front of my tight shorts, groping my cock and balls.

I swatted his hand away. “No touching unless you’re tipping. You know the rules.”

Ken laughed and swiftly turned around. He slapped my ass as he passed me. “I like your butt better than your bulge, anyway.”

Other interests include listening to electronica music (particularly Armin Van Buuren), puttering around the house (and attempting to grow a garden), and gawking at cute twink baristas at the various coffee shops where’s he’s such a regular that he’s known by first name.

Make sure to follow the whole tour—the more posts you visit throughout, the more chances you’ll get to enter the giveaway. The tour dates are here: http://www.writermarketing.co.uk/prpromotion/blog-tours/currently-on-tour/cameron-d-james-2/

Thanks for the great excerpt and book info ....

Congratulations on the release of the complete volume of "The Go Go Boys Club 21" I wish you many sales and thank you for the giveaway.

Welcome to Beyond Romance, Cameron! This sounds fantastic.

I'm definitely checking out this author!

Congratulations and thanks for the giveaway.

Ah, you mens are so funny when left to your own devices! I'd never have thought of a contest like that. I guess when you're young, multiple times per day is normal. I know I'm not alone when I say I sure wish it stayed that way for life!

Good luck with sales. With such a hot book, you should burn up the charts.

Thanks for having me today, Beyond Romance! And thanks to all of the kind comments of support and encouragement from everyone here -- you know how to make a smutty author feel really special! You've all totally made my day!

Congrats on the release!

Congrats on the release! I have the bought the first three installments and enjoyed it. I'll have to pick up the last two or buy the compiled bundle.

Love the cover, its HOT! LOL! I loved the excerpt and look forward to reading the rest of the book.
Tammy Ramey
trvlagnt1t@yahoo.com

Thanks for introducing us to this author and sharing the excerpt!