[Oooh! More hot contemporary erotica from Zenobia! And it's on sale now for 99 cents! ~Lisabet] 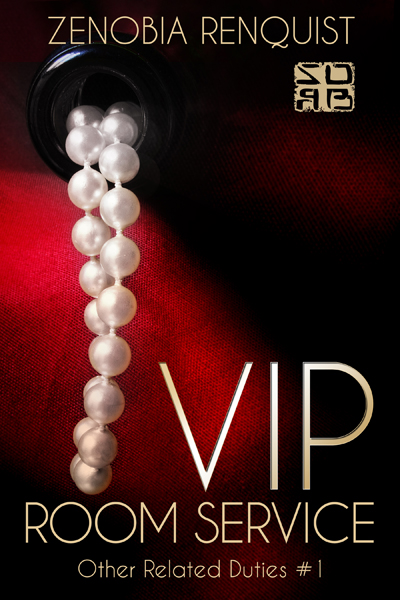 She offers satisfaction above and beyond what is requested.

Lexie's job as a maid at a five-star hotel doesn't normally include the unique and risqué form of room service that rich guest Mr. Malena has requested, nor the generous tip he's offered. Submission and exhibition and a ménage. Lexie can't resist. What should have been a one-time thing turns into an introduction into the sensual world of customer satisfaction. This is one workplace encounter that could get her fired...or will it?

Excerpt
Lexie backed up a step.

“Now, now. Don’t be frightened. Nothing untoward. I promise.”

She snorted. “What exactly is your definition of untoward? I just rode a bottle for your wanking pleasure.”

“That’s all part of wine service. As is what comes next.”

“I didn’t bring it up last night because of how skittish you were, but there is more to it than stuffing that beautiful pussy of yours with a five-hundred-dollar bottle of Chardonnay.”

“I’m not. Call Franceska if you don’t believe me.” He gestured to the phone.

She looked at the bottle and then at him. “Five hundred dollars?”

“Wow.” She’d never had anything that pricey between her legs. Her most expensive toy had barely broken the two hundred mark, and here she’d used a five-hundred-dollar bottle of Chardonnay to get off. “So what else is there? Sex, right?”

“If you want, but not what I had in mind right this instance.” He chuckled. “I’m not as spry as I used to be. I need a little more time to regain my stamina.”

“You look plenty spry to me.” She eyed his semi-erect dick. It hadn’t gone limp after he came. A few well-placed licks would probably have it hard again in an instant.

“Bless you, dear girl. You are good for my ego.” He lifted her hand to his lips and kissed the back. “Now then. After riding the bottle comes drinking the wine.”

“Not you. Me. And a little shouldn’t hurt your performance.” He gazed into her eyes. “Unless you’re a lightweight.”

“No, but I don’t want someone to smell alcohol on my breath either.”

“True. True. But you won’t be drinking.”

He kissed her hand again and ran his tongue up to her wrist. “You’re my glass.”

Zenobia Renquist is the alter-ego of D. Renee Bagby. Call her Zen or Renee, she answers to both. Air Force brat turned Air Force wife, she was born in Europe, has lived in Japan and in several states of the US, including Virginia, Florida, North Carolina, Texas, California, Maryland and Hawaii.

She moved a lot in her younger years and remembers all too well being the new kid in fish-out-of-water situations. But those experiences only made her better able to adapt, as well they gave her a love of travel, preferring road trips over flying.

Turning her favorite pastime into her career, Renee loves to build worlds and torture her characters for the enjoyment of her readers. She can’t fill everyday with writing alone, and also enjoys watching anime, reading manga, crocheting, knitting (yarn and mail), and binging shows on Netflix. She’s a Whovian (David Tennant for the win!), a trekkie (DS9 because Odo rocked), and a fan of pretty much every Marvel live action movie and DCU animated movie.

She has a wacky imagination and tends to write all over the place. In order to keep up, she only asks one thing—Leave Your Reality Behind to Discover Different and Unique Romance & Erotica.

Review her on Goodreads: http://www.goodreads.com/zenobiarenquist