What Draws Us to History?

What draws us to history?

Is it the romance of a different time from our own?

Is it what history can show us about ourselves?

How we’re different from or similar to others in the past?

Does it show us links to the people we were, and how we will be in the future?

Does it show us where we’ve diverged when people have made new beginnings?

Do we hope it will give us hints about where to seek in the eternal quest for who we are and where we fit in to this world?

For me, this last reason is why I write in the historical genre. When I began writing, I never thought about all this. I only knew I was drawn to stories of the past. The Dark Ages, the Elizabethan period, and the Old West equally held me enraptured since even before I began to read myself, for the simple first reason above.

I began researching and writing historical novels only a few years ago. It soon became clear that I was looking for answers to questions in my own history and present. What I discovered has helped me become more comfortable with the person I am.

As I study, I repeatedly ask myself how I can make the information I unearth palatable to someone who might never pick up a book of historical fact, search out an old battle record or travel to a remote graveyard to read the inscription on an old tombstone. Can I offer readers some inkling of what happened in their own town or country to give it the unique flavour it carries today? Some idea of why a certain town emerged just when it did? Most importantly, to shed light upon the reasons a particular society developed the way it has? Perhaps it will provide a piece of the puzzle, which will allow a whole population to try to open the doors previously closed upon the past, allowing healing of the hidden wounds that prevent peaceful cohabitation.

Several towns in the West define themselves as being part of the Pony Express Trail. The stories of Laura Ingalls Wilder played a large part in my understanding of the westward-moving American pioneer, and the peoples and lands they encountered, and how the settlers dealt with adversity. In my first novel, A Long Trail Rolling, coming out in a few days, I use Aleksandra, the daughter of a Polish immigrant trapper family, to show snapshots of 1860 life in the wilds of the Rocky Mountains. She must survive when she is left alone in the world, and becomes a “boy” rider for the famed Pony Express.

Although the ‘Pony’ as it was called, only lasted for a mere eighteen months, it still captures the imaginations of thousands, if not millions, of people, even one hundred and fifty years after its inception.

I show some interactions with American Indians in the novel, both positive aspects and negative.

In my second novel, A Sea of Green Unfolding, more than halfway completed, I show aspects of 1860′s history of both the San Francisco Bay Area, (or the part from Redwood City, via La Honda, and through to San Gregorio) and 1863 New Zealand. Discover why Redwood City grew so quickly? Learn why it was called Redwood City. In the same book, I offer the reader aspects of New Zealand history which are certainly not taught in primary, and only rarely in secondary schools here. They are shadowy aspects of our history which portions of our society wish had never happened, and would rather forget. Although almost apologetic, many of those who know are content to bury it beneath the carpet, so most people are unaware of the whole story and resolution cannot be attained. This untold history has shaped us as the people we have become. The conflicts began long ago between the Maori (and before that, the earlier Moriori) people who had already settled New Zealand before Captain Cook came in the 1700′s and the white settlers from England, Europe and Asia. There was wrongdoing on both sides, but much has remained hidden from the general view.

Overall, I hope to effectively use history to paint a picture, so that readers can better understand some of their own past, answer some of their questions about themselves and become more comfortable with their own place in the world. 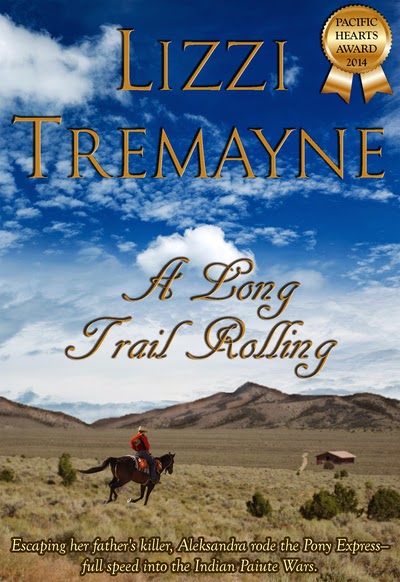 A Long Trail Rolling by Lizzie Tremayne
The Long Trail, Book One

Escaping her father's killer, Aleksandra rode the Pony Express—full speed into the middle of the Indian Paiute Wars.

She didn’t expect to become a target, but she is one now!

Seventeen year old Aleksandra, trained in the Cossack arts from infancy by her father, finds herself alone and running to prevent her Pa's killer from obtaining a secret coveted by the Russian Czar, one which could alter the forces of power in Europe. Disguised as a Pony Express rider in 1860's Utah Territory, she finds herself in even deeper trouble. Her California boss Xavier has a strength to match her own, but can they overcome their differences before the ever-increasing odds overtake them?

With this debut Western Historical Adventure, Lizzi Tremayne won the 2014 RWNZ Pacific Hearts Award and was a finalist in the 2013 Great Beginnings A saga of the Old West with a multicultural cast of those who make up America, it would interest readers who enjoy Westerns, horses, American Indians, immigrants, and the Pony Express. It has a capable heroine, strong historical detail, period veterinary treatment and frontier-pushing characters. It compares to the work of Phillipa Gregory, Diana Gabaldon and Jean Auel, with a little Laura Ingalls Wilder thrown in.


This novel is the first in The Long Trail quadrilogy of historical adventure sagas following her characters from the wilderness of 1860 Utah to Colonial New Zealand.

See my page for details! LizziTremayne.com

Lookout Pass, she reminded herself as she neared the summit. Glancing north to the distant white tops of the Onaqui Mountains, she swallowed hard as she thought again of her papa and the fossil he'd fossicked for her from its rocky ledges.

Her heart stopped in its tracks and she flung herself to the left side of the Palouse's neck in a Cossack hang, lying flat against his side.

'Yah! Yah! Let's go, Scout!' she shouted, throwing the reins at him.

He needed little urging to run full tilt down the steep and treacherously rocky trail as the yells of Indian warriors echoed through the narrow valley. The arrows came hard and fast from the southwest, screaming like a mad bunch of hornets.

Smart. Her lips curved in the hint of a wry grin.

The Indians had placed themselves between the trail and the setting sun, so Aleksandra couldn't see her attackers in the glimpses she stole, from beneath Scout's neck, of the world whizzing past. With the ground only three feet from her head, the scent of sage filled her nostrils when Scout crashed through a clump of brush. Briefly considering letting go of one of her death-grip holds onto the racing horse to pull a gun from her holster, something akin to suicide, she tightened her lip in a grimace and stayed put, trusting far more in the Palouse's speed and handiness to save them. Knowing her weight hanging off to one side had to put him off his best, she tried to stay out of his way, keeping as still as possible, tucked down on the side of the skidding and leaping beast. Praying the cinch would hold, she sent fervent thanks to the pony selectors for their choice of horses.

How I would love to have my bow and arrows, but I only need to get us through to Doc Faust at Rush—

The Palouse interrupted her musings as he threw up his head and reared, angrily trumpeting and shaking his head for a moment, nearly dropping Aleksandra, then resumed his headlong rush down the hill. When he carried on, she heard whistling sounds with every breath and turned her face forward to see where the noise was coming from.

Then she saw the arrow. 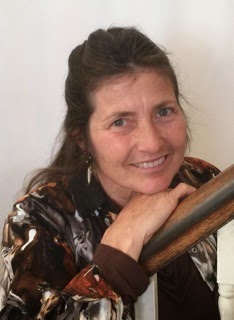 Welcome to Beyond Romance, and congratulations on the upcoming release of your first novel. I'm fascinated by the way you've managed to weave multiple cultures into your book. It doesn't sound like a typical Western romance.