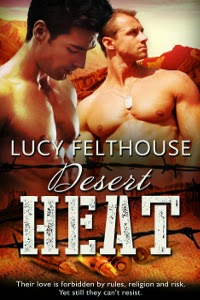 Their love is forbidden by rules, religion and risk. Yet still they can’t resist.

Captain Hugh Wilkes is on his last tour of duty in Afghanistan. The British Army is withdrawing, and Wilkes expects his posting to be event-free. That is, until he meets his Afghan interpreter, Rustam Balkhi, who awakens desires in Wilkes that he’d almost forgotten about, and that won’t be ignored.

Please note: this book was previously published as part of the Unconditional Surrender bundle.

Captain Hugh Wilkes sucked in a deep breath, steeling himself for the heat he was about to be subjected to, though he already knew all the deep breaths in the world wouldn’t help. Darkness had fallen on Camp Bastion, in the notorious Helmand Province of Afghanistan, but there would still be residual warmth left to seep away throughout the small hours. Then the sun would rise, and it would start all over again. It was a damn desert, after all. But, all being well, it would be his last ever tour of the godforsaken place. The British Army was already preparing to pull out. The manpower had been reduced drastically over the previous months. It was time to leave the Afghans to get on with it. They weren’t being abandoned—far from it—they would still receive aid, training and money for years to come. But the British Army was no longer needed, apparently. It was still a volatile place, which would no doubt be monitored very closely, in case strategies needed to be reconsidered.

None of that was down to Wilkes, though. He was here with his platoon for six months, doing whatever they were ordered to do by their Company Commander, Major Hunter. It was unlikely they’d be doing any fighting—they weren’t here for offensive operations. More probably they’d be accompanying their vehicles, weapons and ammunition across the country as it was transported to the air base to be sent back home, or patrolling towns and villages as a show of presence, to reassure and protect the inhabitants.

There was only one way to find out. Grabbing his kit, he headed toward the ramp of the huge C17 aircraft with his colleagues, and followed them out onto the airstrip. Immediately, he was hit by the overwhelming smell of aviation fuel. As he moved away from the airplane this was replaced by the dry atmosphere.

Wilkes imagined he could feel the grains of sand coating his throat and tongue. He’d soon get used to it—he always did. Plus, on the bright side, he’d end up with a nice tan at the end of his deployment. Mentally, he crossed his fingers for a nice, event-free tour of duty. Letting his guard down wasn’t going to happen, naturally, he just hoped it wasn’t necessary. Hoped the insurgents would play nicely. The country was completely different to how it had been when Allied forces had gone in after 9/11. Some fantastic progress had been made, but it still wasn’t completely safe. But then, where was? People died in picturesque villages in the English countryside—though generally not courtesy of IEDs, AK-47s or suicide bombers.