Have you ever shouted at a book you were reading?

Have you ever read a book that had you arguing with the characters? One where you can't stop yourself giving them advice? Not long ago I read a story that had me telling – or, much to my family's bemusement, shouting out loud – my opinion at the poor people in the pages. I even had to put the book down a couple of times because I'd reacted so strongly to it; stomping off in a huff until I'd calmed down and could start reading again.

It wasn't that I didn't like the book, oh no, I thoroughly enjoyed it and had fallen in love with the characters. The story had me so involved I couldn't stop thinking about it and I was neglecting all the important things that had to be done now, now, now, as well as staying up late, reading. I'd turned back into the naughty kid my mum scolded for reading under the covers with a torch. But I couldn't stop; I was living and breathing the story.

I was thinking about it at the supermarket, when hubby was telling me about his (boring) day at the office and in important meetings. Whenever I was forced to do other things I was tingling with anticipation to get back to it.

I absolutely love it when a book does that to me because it’s magical. Only this time, as well as loving the story, I was also cross with it – the story, not the author because causing a reaction like that meant they'd done their job really well.

My reaction to it is what kick-started me to write my new story A Slow Process of Understanding. I wanted to take the same situation and twist it my way, make the characters react the way I wanted them to. The book I'd read was a fantastic slave story but I kept getting annoyed, thinking, 'I wouldn’t react like he did. I’d be plotting my revenge!' or 'why did you do that? Why didn't you do...'

Now, I'll admit I can be a stroppy cow at times – just ask my hubby – but I can't imagine falling hopelessly in love with my owner, if I were a slave. I’d be seething with anger, no matter how carefully I had to hide it. Even if I were treated well, I’d still resent my owner and the power he had over me, especially, as in this case, I'd been free before becoming a slave.

I then started thinking about the mind-set of the owner. How would I feel/react if I’d been brought up in a society that accepted slavery? One where it was common place and unremarkable. I think it’s too easy to say I’d see how wrong it was and act differently. I’m sure that during Roman times people didn’t spend their days worrying about the morals of slavery – even if they were truly decent people. I think they would be more likely to simply accept it, the same way the whole society accepted it.

Attitudes change over time and place and I think it's too simple to ascribe our views to other circumstances. Recently there was a documentary on TV about television in the UK during the 1970's. The casual racism, sexism and homophobia were truly shocking and yet, often, back then, it was meant to be funny. It really was a different time.

Thinking about the slave story again, I realised that just because a character accepts being an owner doesn’t make him a bad person. He could be a really sweet guy who does what he thinks is the right thing, the good thing, in a situation that everyone else thinks is okay.

So, if the good-guy owner gets a slave, how would things work between them?

How would I react if I were the slave or the owner?

I can understand that owner and slave can become very close; but real, equal full-on love? No, I can’t see that. I think the power dynamic would be too unbalanced.

But I adore a happy ending so I was interested in how I could bring a couple together with that kind of awful, unequal dynamic at the start. I wanted them both to see things from the other's point of view, to really understand the situation so they could fall in the kind of deep, ever-lasting love that I dream of.

I thought that was a huge challenge but one I was eager to attempt. I’d have to change mind-sets, diffuse the anger and, somehow, bring them together in a loving, caring and, most importantly, equal relationship. Like I said, no easy task. I think the result is one of the best things I've ever written.

A Slow Process of Understanding by Faith Ashlin was released by Totally Bound on December 26th. 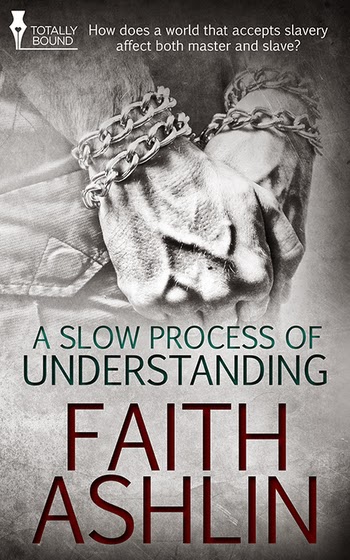 How does a world that accepts slavery affect both master and slave? Can two people build a new life for themselves with a start like theirs?

It’s a world like this one except for the all-powerful State that’s very firmly in control and the fact that slavery is legal. Jimmy had never really thought about it or the fight for freedom going on around him. He was too busy enjoying his privileged life as an actor on a sci-fi show.

But what is he meant to do when he’s forced to permanently bond to a slave he doesn’t want just because he made one silly, drunken mistake? Does it change who he is, what he is?

Trouble is, Jimmy isn’t sure who he was to start with. He’d never thought about it.
And what about his slave, Nate? Can a slave force Jimmy into learning something about himself?

When Faith was clearing out her attic many years ago, she found a book she’d written as a ten-year-old. On rereading it she realised that it was the love story of two boys. Over the years her fascination with the image of beautiful young men, coiled together as they fell head over heels in love, became a passion for her.

Since that first innocent book—written in purple sparkly pen—she has written many stories, set in varied worlds, but always with two men finding their way to happiness.

You can find me at…

I wish you luck with it.

I do not think I have ever yelled at a book, but I have had times I thought why this or that... I like getting drawn into the characters' lives and story... to actually feel something for them. Thanks for sharing about your book Faith!
greenshamrock at cox dot net

I'm really looking forward to this one.

I've yelled at a book before, once. Harry Potter and the Order of the Phoenix. No one sends me into a blind rage like Dolores Umbridge.

I am really intrigued by this premise...

I can't wait to read this one!

Hi Faith! I just purchased it from Amazon. I can't wait to read it. Thank you.

I've sent you an email with details.

Some characters just *get* to us!

Thank you so much.

I really hope you enjoy it.

Thanks, I thought it was a different angle on the slave story.

I do hope you enjoy it.

Thank you... email received and sent! :)