This Sunday I'm treating you to a new excerpt from what may be my very favorite book - Rajasthani Moon. Why is it my favorite? Well, first of all, I let my imagination run wild in writing this novel - and the results show it. Secondly, it's one of the hottest things I've written, with two gorgeous, dominant heroes. Finally, it's a delicious love story, in which a stubborn and independent woman is tamed by her lover who's quite literally a beast.

Oh - and I adore the cover too. It captures Cecily perfectly. 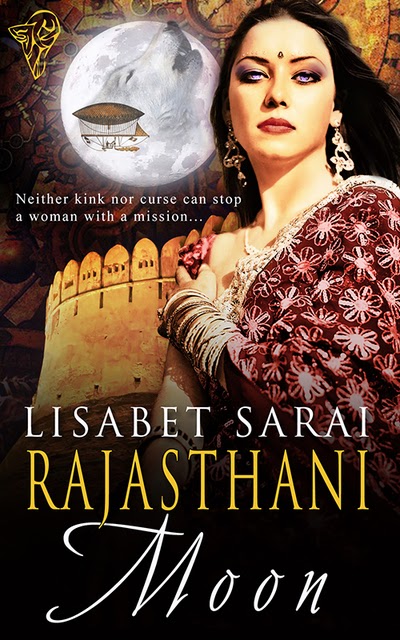 After you've read my excerpt, head back to Victoria's for more sexy Sunday Snogs.

The Rajah’s brother perched on the corner of the bed, looking more royal than usual. He wore flowing trousers of midnight-blue silk, and an embroidered kurta in a lighter shade, set with pearls. He had combed his moustache and brushed his long hair. It hung in a gleaming plait over one broad shoulder. Despite her earlier resolution, Cecily felt herself moisten at the delicious sight.

“My apologies, lady. I came to inquire after your health.”

Cecily glanced around the room, seeking some sort of clothing. She didn’t want to converse with Pratan naked, if she could help it. She knew he could read the signs of arousal in her body. Whatever had happened to her luggage from the expropriated coach? It certainly didn’t seem to be anywhere in this room.

Finally, she grabbed the sheet off the bed and wrapped it around her ample curves, then seated herself in a chair across from the bed. Given the small size of the chamber, this didn’t put much distance between them.

Pratan raised an eyebrow in amusement at her modesty, but said nothing.

“Well, we used you rather hard last night.”

Now it was Cecily’s turn to cock a silent eyebrow.

“You swooned senseless toward the end. My brother and I were worried.”

“Why should you care about the well-being of a prisoner? A sex slave?”

“Be honest, Cecily. We didn’t exactly compel you last night.”

“Of course you did.” Cecily shook her head in mock exasperation. In fact she was intrigued by his apparent concern. “I had no choice in the matter.”

“You could have refused.”

“I did refuse, multiple times, if you recall. To no avail.”

“Well, you seemed to enjoy our attentions so much…”The uncertainty on Pratan’s face made him look younger. “We assumed you weren’t serious. You were obviously aroused, even by the flogging. If you’d really hated it, we would have stopped. Or at least I would have.”

“No means no. My level of excitement is irrelevant. In any case, I suspect that the Rajah would have continued regardless. He has a cruel streak, I’ve been told.”

Pratan’s eyebrows twisted into a scowl. Cecily pressed her advantage.

“In any case, I seem to be perfectly healthy, aside from the expected effects from being beaten and then fucked senseless.”

“You asked me to fuck you.” His black eyes flashed. “That at least you can’t deny.”

This morning he tasted of oranges and black tea. She opened, almost automatically, silently inviting his tongue to enter. When he did not respond, she ran her own tongue along the seam of his closed lips, seeking access. Her nipples peaked under the sheet. Moisture pooled between her thighs.

He broke the kiss to lick her earlobe. She squirmed as though he’d flicked his tongue across her taut clit.

Posted by Lisabet Sarai at 7:55 AM

Congrats to Gayle!
Enjoyed this snippet from Rajasthani Moon Lisabet!