[Check out this great new short story collection edited by Delilah Devlin. This is part of the blog tour for the book. Use the Rafflecopter widget at the end of post to enter the drawing for a raft of prizes, including a $50 bookstore GC! ~ Lisabet] 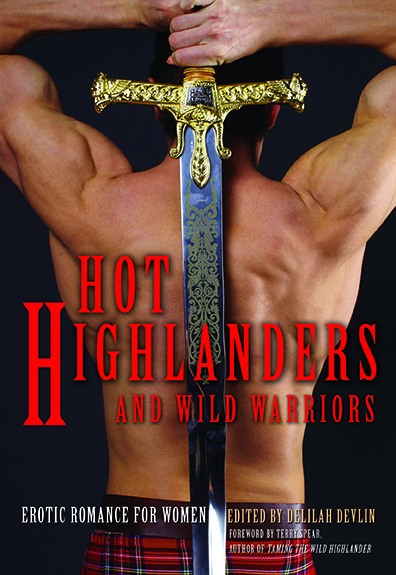 Men devoting themselves to their true love through the art of courtly love is the ultimate in romance. Hot Highlanders and Wild Warriors is filled with wild knights and Scottish warriors whose courage on the battlefield is outmatched only by their ardor for their ladyloves! Readers will unleash their fantasies of olden days where men wearing heavy armor or thick tartans sent a spirited young maiden’s (or lonely widow’s) heart fluttering. These bravehearts were prized for their physical strength and men were judged for their fierce loyalty and unshakeable honor. Crusaders, highlanders, Normans and Saxons, tournament fighters, vikings, and hunky Mongols astride stallions in search of adventure and love all populate the pages of this steamy read.

“Pleasure in Surrender” by Delilah Devlin
After the lady of the keep bars her gates to the barbarian the king commands she wed, the half-Viking knight scales the walls of her heart

“My Loveliest Vision” by Renee Luke
Despite a daunting affliction, the lady of the keep will protect her father’s holdings from a resolute knight come to claim what he was promised

“On My Honor” by Beatrix Ellroy
When a wounded knight is offered sanctuary by a widowed healer, the pleasure she also offers may strain his honor

“A Hawk in Flight” by Connie Wilkins
The Lady of Aragotsotn paid tribute to the Mongol conqueror to save her people, but her falcon-fierce heart remains undefeated—though it might be won

“To Love a King’s Man” by Emma Jay
At the Highland Games of 1589, a young widow risks all for a chance to win the love of a bastard favored by the king

“The Bodyguard” by Jacqueline Brocker
As a ninja stalks through the palace corridors, the daughter of a samurai lord is drawn to her wounded, pensive bodyguard

“The Squire” by Cela Winter
While traveling in France, a knight’s secretive new squire makes him question everything he knows about himself

From “Wicked” by Susannah Chapin:

Drawing near, Isobell feasted on the taut lines of his belly, the thin line of hair disappearing beneath the sheet, and lower to the angry twisted scar bisecting his thigh from groin to knee.

Her gasp was soft but not soft enough. In a motion so fast Isobell didn’t have time to scream, Lachlan pinned her to the wall, his massive forearm across her chest and a dirk at her throat. Panic gripped her in its iron fist, her shallow breaths doing nothing to tame her blackening vision.

He was going to kill her.

As quickly as the fury came, it receded, recognition dawning across Lachlan’s steel-gray eyes. “Isobell?” His voice was ragged with disuse. “Christ, what are ye doing here?”

She swallowed hard as the dirk’s cool blade left her skin. Trembling fingers flew to her neck, her elbow grazing his naked torso. Her heartbeat pounded in her ears, and a sheen of cold sweat dotted her face and chest.

There was barely a hairbreadth between his naked body and hers. His masculine scent wrapped around her, drowning her in desire.

She gathered her nerve, squared her shoulders and peered up at him. “I’m here to bring ye back.”

“Is it yer da? Does he need me?” He reached to the side for his plaid draped over a chair, ready in a heartbeat to serve her father. Never a moment’s fear or doubt, just unshakable loyalty, bone-deep bravery.

Isobell reached to still his fingers with hers. “Nay, it isna my da.”

He straightened, towering over her. Long and lean, built for power and speed. A deadly combination of brains and brawn. Confusion knit his brow. “Then why are ye here? Ye shouldna be sneaking around the castle at night.”

Her practiced speeches were tendrils of fog she couldn’t quite grasp under his icy gaze. What had she planned to say? Use me in any way necessary to feel alive again? What manner of idiot was she?

“Isobell.” He touched her chin, tipping it until she met his eyes.

Something dark and liquid pooled in her belly.

“I think ye should leave now, lass,” he said, his voice tinged with anger.

She stiffened her back, grasped the fleeing strings of her frayed courage and infused her tone with all the authority she could muster. “I brought ye water and soap. There’s a clean shirt and food, too. Wash up and I’ll change yer sheets.” She brushed past him and stripped the sheets, the weight of his gaze on her.

Water splashed in the basin just before he spoke. “Leave the sheets. I’ll do the bed.”

“Nay. Let me tend ye.” Isobell avoided his nakedness as she dumped the dirty bedclothes outside the chamber door. She’d give him privacy. For now.

The edge in his tone was sharp enough to sever her tender resolve, but Isobell refused to bleed. “I’m not sure of that. It didna look like ye were caring of yerself, sleeping in filth and refusing to leave yer room.”

“And what would ye know of it?” he spat.

“I know ye lay in here, day and night. I know ye stopped riding, stopped hunting. Ye pay the maids to bring yer food but won’t let them help ye wash. Ye came back from battle a ghost of who ye were.” She paused, her fingers bunching in the fresh sheets. “The most frightening part is that ye were little more than a ghost when ye left. Ye’re ashamed of yer leg, of yer limp, so ye push everyone away. People talk about ye, Lachlan. They whisper things.”

The heat of him pressed against her back. His warm breath caressed her neck as he spoke low and deadly. “And what do they say about me, sweet Bell? Tell me, so I can show ye how true it is.”


Visit the other blogs hosting this tour for more excerpts and more chances to win!

Welcome to Beyond Romance, Delilah and the rest of the contributors. I loved this cover from the first time I saw it. Sounds like what's inside is just as delicious!

Some of the summaries are hilarious. Not sure I like the scottish accent writing though. I wonder if I would like this. Historical romances tend to get a bit too aggressive.

I love the cover. It's enticing. Thanks for the opportunity and giveaway!

Loved the excerpt, thank you.

Each of the stories sound good! Some new to me names listed! Thanks for sharing! :)

I'm intrigued by all the different story premises!