I can feel it in the air. The holidays are coming. I'm thinking about evergreens and mistletoe, candy canes and egg nog, all the delights of the season.

Snow, too. I won't get snow here in the tropics, but I've been thinking about it and writing about it (a new holiday story in the works for you). And so I thought I'd share a very sexy and emotional snog from my snowy M/M/F holiday romance Almost Home.

Suzanne and Gino have history going back to high school, but for years Suzanne has been three thousand miles away, preoccupied with her challenging career. A mistletoe kiss at a holiday party reminds her of their old bond and proves that some things get better with age. When Gino rescues her from a New England blizzard, though, she discovers that she's not the only love in his life. Gino shares his bed and his colonial-era farm house with taciturn painter Harris Steele. Snowed in, without electricity or running water, the three explore the many shapes a triangle can assume. Although she's far away from her everyday existence, Suzanne realizes that she's almost home.

After you've enjoyed my snog, please visit Victoria's Snog Central, where you will find many more delicious Sunday kisses (probably with holiday themes, too!) 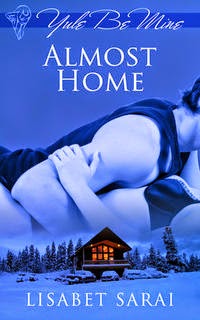 Now Gino shimmied his tight jeans down over his narrow hips. His rigid penis sprang out, a fat arrow of flesh pointed at the ceiling.

Suzanne’s breath caught in her throat. She licked her lips.

He turned his back to her as he eased the pants over the luscious curves of his bare butt and pushed them down to his ankles. With a flourish, he stepped out of them and kicked them away. Finally he stood before her, gloriously naked except for the gold chain around his neck and his impudent grin.

“No underwear?” teased Suzanne, holding out her arms.

“Helena told me you were expected,” Gino replied, stretching out beside her. He toyed with her nipples. She retaliated by grasping and stroking his substantial erection.

“Pretty sure of yourself, aren’t you?” she commented. He gasped as she smoothed her thumb over his knob, spreading the liquid leaking from his slit.

“Not particularly. But I’ve always been an optimist.” Suzanne watched, fascinated, as he rolled a condom onto his cock. He settled on top of her, careful not to knock them off the the narrow couch, and nudged her thighs apart. His hardness prodded her lower lips. “Now—can I fuck you, Suzy Q?”

He slipped into her like an old lover, smooth and sure. She moaned with delight and wrapped her legs around his waist. She hadn’t felt this good in a very long time—perhaps ever. He was a perfect fit, with enough bulk to stimulate all her sensitive spots without stretching her to the point of pain. He used long, slow strokes, letting her appreciate every inch of his flesh sliding over hers. She clenched her inner muscles along his length, and was rewarded by his moan.

“Oh God! Oh—Suzy!” He picked up his pace, fucking her hard and fast, just as she craved. His strong arms supported his weight while his pelvis jerked and drove his cock into her depths. His face hovered over her, lit by the flickering fire. Suzanne watched his expressions as he rammed into her. His blissful smile grew wider at the deepest point of each stroke. His eyes were screwed shut as if the pleasure was too much to bear.

“Look at me, Gino,” she whispered, arching up to meet each thrust. He heard and obeyed, locking his eyes to hers. She tumbled headlong into their luminous depths.

He opened his soul to her gaze. All his hunger was there, more than twenty years of pent-up desire. She saw the laughter, too, gentle and mocking, both his weapon and his armour against hurt. Regret flickered in the background—why had they waited so long, their youth lost to stubbornness or blindness? And woven through it all, glowing in his face as he finally, royally fucked her, was simple love.

The realisation rocked her harder than his cock slamming into her cunt. This wasn’t just fucking—Gino, the boy and the man she’d known for most of her lonely life, was making love to her.

She dragged him down so that his weight mashed her breasts. She wanted him closer. “Gino,” she whispered. “I never knew…” His mouth was on hers. They shared their breathing. She felt his pulse, racing even faster than his cock, beating against her skin. She tightened around him, pulling him deeper, trying to meld their two bodies into one.

Mouth to mouth, eyes locked, they writhed together. Gino slid his hands under her buttocks and held her aloft, driving into her again and again. She floated there, cradled in his strength, ravaged by his lust.

The climax welled up from her depths, powerful, pure and irresistible. The pleasure built and built until she was sure she would shatter, but instead it only drove her higher. The room glowed golden. Gino’s eyes were jewels. She felt herself ripple like water around his cock, then the answering surge from his flesh. She sensed every flicker as he came, hot and sweet, inside her.

He kissed her with quiet passion. She tasted honey and salt, eggnog and peppermint, and came again, deep and soft as falling snow.
Posted by Lisabet Sarai at 3:00 AM