[I've got a sneak peek for you today at Lynne Barron's Regency romance, Portrait of Passion. Use the Rafflecopter widget at the end of the post to enter Lynne's drawing for a $25 bookstore gift certificate. ~ Lisabet] 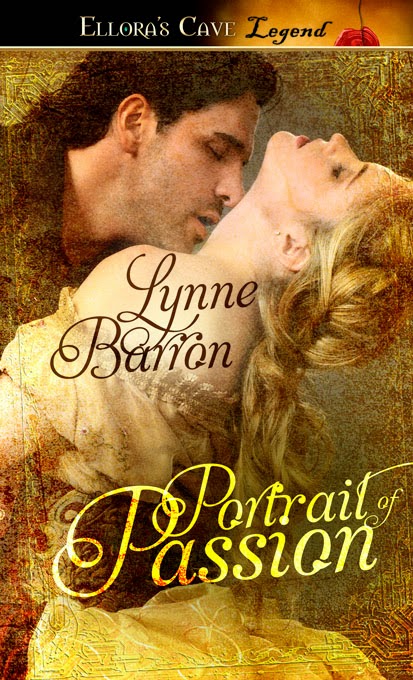 What’s a Viscount to do when a mysterious lady with a secret past and a reputation frayed around the edges suddenly appears in London in hot pursuit of his naive young cousin, setting the gossips’ tongues wagging, stirring his family into pandemonium, and driving him mad with her irreverent ways?

If the Viscount in question is Simon Easton, the answer is quite simple.  Seduce the beguiling lady.  But Miss Beatrice Morgan isn’t your average tarnished lady. She’s lived a slapdash life wandering the globe like a gypsy, painting fantastical portraits of duchesses as sirens and landscapes featuring a crumbling old fountain, all the while harboring a secret desire to return to Idyllwild, the only home she’s ever known.

What Simon does not know is that Beatrice just might be willing to sacrifice her honor, her virtue, her very heart to reclaim Idyllwild.

“Who is she?” asked Simon Carlisle, Viscount Easton.

“Isn’t she beautiful?” replied his cousin Henry Tinsdale, the Earl of Hastings.
She was beyond beautiful, Lord Easton thought as he watched her across the ballroom. She was mesmerizing. The willowy blonde had captured the attention of every person in the room as soon as she had entered on the arm of Viscount Moorehead only moments before. Simon heard whispers of conversation behind the fluttering fans of a group of ladies standing behind him.

“A scarlet dress, can you imagine?”

“Not so surprising, surely? They say she’s an artist, of all things.”

“Artist? Is that what they are calling them these days?”

While the ladies of the ton whispered and stared, the gentlemen silently watched and circled about her, gradually closing the distance. From Simon’s vantage point some twenty paces away, the men appeared to be involved in a slow dance whose moves were carefully orchestrated to appear subtle. They were anything but.

Moorehead had yet to introduce his beautiful companion to anyone in the ballroom. They simply stood off to the side of the cavernous room, framed by two potted ferns, as if waiting for the hordes to come to them.

With a gesture that clearly spoke of familiarity and affection, her escort placed his hand upon the small of her back and leaned in to whisper in her ear. She evidently found his remark amusing, for she tossed her head back and laughed. Even across the crowded room Simon could hear the echo of that laughter, mellow and dark.


Portrait of Passion is on sale for a limited time!
99¢ at Ellora's Cave: http://www.ellorascave.com/portrait-of-passion.html

Write about what you know.

Every creative writing teacher and college professor said these words to Lynne Barron in one form or another. But what did she know?

She knew she enjoyed the guilty pleasure of reading romance novels whenever she could find time between studying, working and raising her son as a single mother.

She knew quite a bit about women's lives in the Regency and Victorian era from years spent bouncing back and forth between European History and English Literature as a major in college.

She knew precious little about romance except to know that it was more than the cliché card and a dozen red roses on Valentine's Day.

Then she met her wonderfully romantic husband and finally she knew.

And she began to write.

Beyond Romance, Thank you for giving your fans a sneak peek at Portrait of Passion!
Lynne Barron

Thanks for sharing a bit about your book with us! Portrait of Passion sounds like something I would enjoy... love those EC books!

Thanks for being my guest. Good luck with your tour!