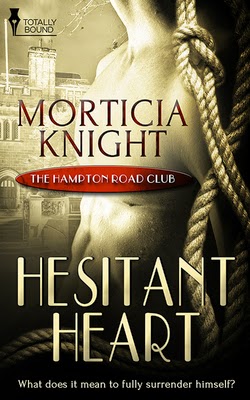 Sam is a naïve young man who arrives in Hollywood to escape his brutal father. When the older, sophisticated Aaron rescues him, Sam discovers what it means to fully surrender himself to another.

Eighteen year-old Sam Cunningham is used to living with lots of secrets. He’s had to hide his true nature his entire life or else incur the wrath of his strict and abusive father. When he’s faced with a horrible ultimatum, he flees to Hollywood where he hopes he can escape the fate his father has planned for him.

Aaron Rubenstein is a wealthy and sophisticated man who loses himself in painting portraits of bound men to help stave off his loneliness and despair. Unable to find a lasting connection with anyone, he’s had to resort to paying lovers not only for their affections, but to be allowed to indulge in his darker passions. Aaron’s only respite is his nights at the Hampton Road sadomasochism club where he’s a respected Dominant.

Naïve and inexperienced in the ways men can please one another, Sam takes a job at a bathhouse where he first glimpses a beautiful older man. Aaron notices the sweet towel boy watching him with interest every time he patronizes the Temple of Eros bathhouse. A traumatic incident for the innocent towel boy triggers Aaron’s protective tendencies and he’s compelled to rescue the gentle Sam from the clutches of the Temple’s manager.

They embark on a journey together that teaches them both things about themselves that they never knew. As their bond deepens and Sam is trained for his first night at the Hampton Road Club, an unknown danger lurks. Will Sam’s father find him and destroy both men’s chance for true happiness together? Or will Aaron protect his boy and keep him for always?

Reader Advisory: This book contains a scene of branding.

Aaron had gestured to the settee that was on the other side of the room from where the large bed was. Everything had an airy elegance to it. Sam did as Aaron had instructed and waited until he’d pulled the small matching wingchair over and placed it in front of him. Sitting down, he crossed his legs languidly in the same manner as he’d done in the bathhouse private room—except for the fact that he currently wore clothes.

“Sam, I need you to tell me what’s troubling you.”

“And you’re most welcome. But I already said we could work something out once you have employment. Don’t you believe me?”

Shaking his head vigorously, Sam blurted out, “Of course I believe you! You kept your word at the bathhouse, you’re being so nice to me. I’d do anything you asked.”

He noticed a slight grimace on Aaron’s face.

“Yes. I believe you would.” Aaron seemed to regard him intently. “You have to be very cautious not to give everything of yourself away to someone just because they’ve been nice to you. Someone could take advantage. You must be careful, little Sam.”

“But what about what you said earlier? About giving control?”

Sam watched uneasily as Aaron seemed to hold his breath as he stared at Sam. It was impossible to tell what was really going on behind his implacable expression.

“That’s a decision to be made with prudent and thoughtful consideration. It’s not to be done lightly.” Aaron had said it in a severe tone, very unlike his typically smooth one. “Now tell me what’s actually bothering you. Be honest with me.”

There was an uncomfortable knot in his stomach. He was terrified to tell Aaron the truth, but he didn’t want to lie. He wanted to please Aaron, not have anything come between them. Even if it didn’t seem as if there either was or would be a ‘them’.

Sam worked his mouth open and closed a couple times as if he were warming up to the idea of speaking. “I…I’m not used to being alone. I don’t like it.”

Despite feeling more than a little silly, Aaron had insisted, so Sam continued.

“I shared a room with my two little brothers right up until I left home. I also have two sisters. The house was always full. When I came here, I was in the car with Louis.”

There was an almost feral glint in Aaron’s eyes and he practically growled out his words. “He never touched you, did he?”

“No!” Sam face heated. “He…he asked me to come live with him though.”

Aaron made a sound akin to a grunt. “I bet he did.” He took a deep breath and seemed to regain his composure. “And why didn’t you go with him? You had nowhere else. He could’ve taken care of you.”

“I see.” Aaron appeared to relax, his tone calm again. “But when you arrived here, you were still alone, right?”

Sam wriggled around in his seat. Someone as strong and mature as Aaron wouldn’t understand about needing another person, about loneliness.

“It wasn’t what I would’ve preferred, but at least there were the other boys in the room. I wasn’t completely alone.”

Aaron fixed him with a compassionate stare. “Are you scared to be here alone?”

He had to drop his head. It was all so unbelievably embarrassing.

The command in Aaron’s voice had been unmistakable and Sam didn’t hesitate to meet his eyes. The very sound of it had him all soft and melty on the inside.

“Don’t be ashamed to admit that you need the comfort of another person.” Aaron’s tone had softened. “Everyone does.”

There was the barest hint of a smile on Aaron’s lips, but it seemed to be tinged with a melancholy. “Even me, little Sam.”

His head was alive with all kinds of thoughts and questions. He needed to know more about Aaron, everything he possibly could. Swallowing hard to try and relieve the dryness in his throat, he then took a deep breath to give him the courage to ask his next question.

“So…do you have anyone?” He was sure his cheeks were a bright red, but he wouldn’t back down. He had to know. “I mean, so that you’re not lonely?”

If only Aaron would show more of his feelings.

Sam had caught a few moments that day where there’d been some emotion from Aaron, but for the most part, he’d maintained a slightly amused, even expression. However, there was something about what Sam had said that seemed to have affected Aaron strongly. There was a genuine sadness in his eyes. Even his shoulders had slumped almost imperceptibly.

Sam considered this, frowning. “But you’re so handsome and nice. I don’t understand.”

Aaron sighed. “It’s perhaps preferable that you don’t. I have specific needs that I require from a companion that are unusual, at best. There haven’t been any who’ve desired to stay with me under my conditions.”

The startled look on Aaron’s face alerted Sam to the fact of what he’d just blurted out loud. As much as his cheeks continued to furiously heat up, he couldn’t take it back. And anyway, it was the truth. Wasn’t that what Aaron had asked for?

Leave me a comment with your email and you could win a copy of Studio Orders, the book which inspired The Hampton Road Club series. I'll draw the winner next Saturday.

Welcome back to Beyond Romance, Morticia, and congratulations on the new release!

The twenties are such a fascinating era - so much change. This sounds like a fabulous book.

Sounds absolutely delicious; I can't wait to read it.
doglady@frontiernet.net

Thanks for sharing your new release with us.
lringel(at)comcast(dot)net

I've enjoyed Morticia's books, and it would be fun to read a historical by her!

This book sounds pretty great:) Count me in please.
babybarlow78@gmail.com

Thank you so much for this chance to win a copy of your books.

Sounds so deep. Count me in, plz
dreamerbookslover@gmail.com

It sounds like an emotional read. Thank you for the giveaway!
humhumbum AT yahoo DOT com

I agree about the time period. Worlds were colliding & shifting in so many ways.

Thanks so much for sharing the story. I love a good one.
debby236 at gmail dot com