What is it we love about the paranormal and all the creatures that haunt these worlds? In part, I think the possibility they might exist or at one time existed fascinates us. It's more interesting to read about creatures/humans with supernatural powers than it is to read about the common, mundane man. The supernatural/paranormal are also fascinating to research, create and write.

When I wrote The Sin Eater's Prince, I loved exploring the ancient myths and lore enveloping Wales. There are many paranormal aspects and characters in The Sin Eater's Prince, but I've chosen only a few here to tell you about. That means, if you want to know more about the others, you'll have to read the book. Clever of me, don't you think? You can buy the book on Kindle US here: http://amzn.to/HlboOL and Kindle UK here: http://amzn.to/HAlQAC 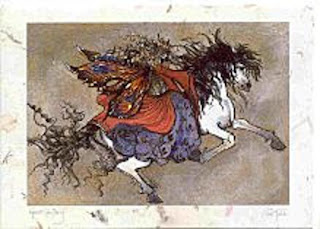 Welsh faeries that are good, dance & kidnap children with long golden hair. They possess glamour and can change into goats, dogs, cats and foxes. They live underground in mountains and caves. The way to their wooded country the Land of Enchantment with meadows of bright flowers is underneath hollow banks that overhang the deepest parts of lakes, or the deepest pools in rivers. Mortals can not follow them further than the water.

The Tylwyth Teg are dark-haired, one to three feet tall, wear birch leaf coats, moss breeches & gorse flower hats. They are associated with poisonous foxgloves which are called petticoats. They use glow worms for torches. They ride white horses and the women have bright dresses of red, white, pink, blue and green on Mayday. The Fair Folk play harp and violin music; feast on wine in golden cups.

Their sacred well which humans cannot drink from is full of fish of every color and also golden fish. Their lake is populated by herons, geese, cormorants, eels, leeches, water-hens, water-lilies, rushes & sedges. On nights when the moon is full the Tylwyth Teg celebrate a merry night. At midnight they rise out of the ground in every combe and valley, join hands, form circles, and sing and dance until cock-crows. Then they vanish like the mist.
Knackers/Knockers, Mischievous elf-like creatures that haunt the mines of Wales 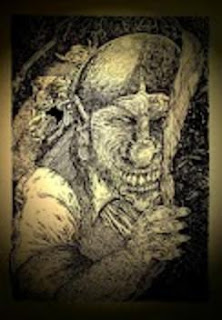 The Knocker, Knacker, (Welsh) or Tommyknocker (US) is a mythical creature in Welsh folklore. They are the equivalent of Irish leprechauns and English and Scottish brownies. About two feet tall and grizzled, but not misshapen, they live beneath the ground. Here they wear tiny versions of standard miner's garb and commit random mischief, such as stealing miner's unattended tools and food.

Their name comes from the knocking on the mine walls that happens just before cave-ins – actually the creaking of earth and timbers before giving way. To some of the miners, the knockers were malevolent spirits and the knocking was the sound of them hammering at walls and supports to cause the cave-in. To others, who saw them as essentially well-meaning practical jokers, the knocking was their way of warning the miners that a life-threatening collapse was imminent.

According to some Welsh folklore, the Knockers were the helpful spirits of people who had died in previous accidents in the many tin mines in the county, warning the miners of impending danger. To give thanks for the warnings, and to avoid future peril the miners cast the last bite of their tasty pasties into the mines for the Knockers. 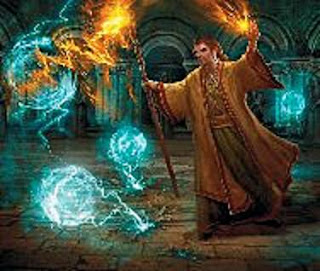 Dyn hysbys is a title rather than a name, the most common term in Wales for a wizard. The soul of the druid, too imperfect for Christian heaven and too good for hell, inhabits the body of the dyn hysbys. Among the powers of the dyn hysbys is the ability to know and reveal the unknown, especially events in the future pertaining to love and death. Such powers might also be applied to commonplaces, like finding money that has been lost or helping a Welshman to escape from an English gaol. He is said to possess the power of breaking spells by undoing the evil perpetrated by witches and others.

A dyn hysbys might also undertake to heal an animal or human by using charms and incantations. His powers are especially potent on the days when the world of the spirits is thought to come closer to that of humans, such as May Day, St John's Day, and the eve of winter. There are three kinds of dyn hysbys: clerics, men who had learned their craft from esoteric books, and those who had inherited the power from their families. Other Welsh terms for wizard are: conjurer, magician, and charmer. The names of many dyn hysbys survive, and some were renowned beyond their time and place.

Note: In The Sin Eater's Prince, Owen Rhys, the sin eater, is discovered to be a dyn hysbys, his powers passed down through the generations. 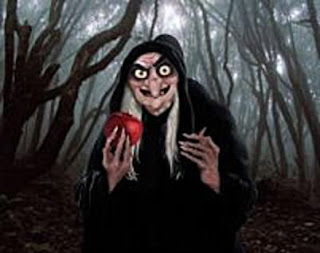 The Welsh “Hag of the Dribble” or “Hag of the Mist” may suddenly leap out of a water channel, but otherwise she’ll invisibly stalk her victims until they pass a crossroads or stream. Here she’ll become all too visible and audible, for in both instances her cries, like those of the Banshee are harrowing. If the person thus doomed to die (either the observer or someone they know) is a man the The Hag will holler “Fy ngwr! Fy ngwr!” (“My Husband! My Husband!”) but if a youth is to succumb, then she’ll cry “Fy mlentyn! Fy mlentyn bach!” (“My child! My little child!”)

She is a hideous sight to behold, with her crooked back, hooked nose, long filthy hair and manic eyes. She is pinched and scrawny, yet her superficial mass likely betrays her true strength and vigor. The most frightfully inhuman of all her features, however, are her long thin arms, for not only do they end in dreadful talon-like hands, but black scaly wings also hang from these extremities. These bat-like appendages are thought capable of flight. Her negligible clothing is black and ragged.

About The Sin Eater’s Prince 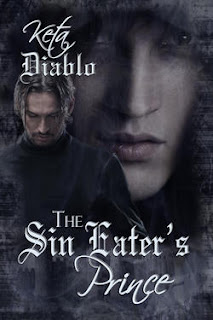 The sin eater has been shunned by the local villagers all his life, except by Andras Maddock, the local physician. In love with the one man he believes will never return that love, Owen is shocked when Andras saves him from death at the hands of a vampire.

Dagan, Dark Lord of the Underworld, vows to avenge his father’s death and obtain the Prince of Wales’s mystic sword from Andras. The claymore’s power holds an immunity the vampires have coveted for centuries.

Star-crossed love, sorcery, and bloodlust collide on a vengeful path where only one side will remain victorious.


Bio
Keta Diablo lives in the Midwest part of the country on six acres of woodland. When she isn't writing or gardening she loves to commune with nature.
Keta is a multi-published author in both erotic romance and gay fiction. Her latest paranormal novel, Where The Rain Is Made, has been nominated for a Bookie Award by Authors After Dark in the Best e-novel category. Keta's books have also received numerous Top Pick, Book of the Month, and Recommended Read awards from the top professional review sites.
You can find her on the 'Net at the following places:
Keta's Keep, http://ketaskeep.blogspot.com
Keta Diablo Books: http://ketadiablobooks.blogspot.com
The Stuff of Myth and Men, http://thestuffofmythandmen.blogspot.com
Keta on Twitter: http://www.twitter.com/ketadiablo

Posted by Lisabet Sarai at 4:30 AM

Welcome back to Beyond Romance, Keta!

I'm curious - what attracted you to Welsh mythology in the first place? If I'm not mistaken, you're American, right?

Anyway, thanks for being my guest. The Sin Eater's Prince sounds great!

It's all so fascinating. Welsh Mythology is so specific. I wondered about the interest as well.

OK, those are pretty cool, creepy, and interesting, Keta! I've always loved mythology and used to borrow those collections of stories from different cultures from our school library--looks like you could write your own about Welsh mythology! Like Lisabet and Marybelle, curious what prompted your interest. And did you also research other cultures? You've got some great stories out...

Great information! Sounds like you had a lot of fun while researching for your book. :D

Wales has always intrigued me, and I've never understood why the fae don't get the attention some other paranormal creatures do. So, this was very cool and informative!

Lisabet, your blog looks so great! Thanks much for hosting me. I'm tweeting about your wonderful contest too. You rock, Lisabet, thanks again,

Keta
The Stuff of Myth and Men
http://thestuffofmythandmen.blogspot.com

I love all books that are different than the normal romance! The supernatural adds more to the story! :)

The above comment was mine Bebe aka bebe4812@comcast.net typing on a phone can be hard sometimes!

Thanks for the fascinating post. You learn something new each day. :)