Sun, Sea and LOTS of Fun!

A little over a year ago, I was lucky enough to visit Cairns in far-north Australia. Cairns is one of the best places to base yourself if you're going to visit the Great Barrier Reef, and I was seriously looking forward to it.

The first thing we did was book to go out to the reef. There are a lot of boats that do day trips. We chose a company that had its own pontoon. The boat takes you out to the pontoon, and from there you can snorkel, scuba dive, go into the underwater observatory, go out on the glass-bottomed boat, etc. They feed you lunch, and you're usually back in Cairns by five o'clock.

What struck me first about the cruise out to the reef? How incredibly fit the crew were. Mmmmm. Like, really, really fit. We got to the pontoon and the dive instructors put on their wetsuits, and my mind started racing. It was hot. Incredibly humid. The sun was beating down. I was surrounded by sexy bodies and sparkling water...um, plot idea, anyone?

I still haven't been forgiven for insisting on a room service dinner so I could make notes, but I just had to. Especially because it just wasn't gelling together. My heroine was wrong, somehow. Eventually, I gave in to nagging and we went on an ice-cream break. It was about ten-thirty on a weekday night, and still incredibly hot and sticky. Cairns has a wonderful waterfront esplanade area—because it's not safe to swim in the ocean right there near the marina, they've built a series of wading and swimming pools with sand beaches, and there's a lovely park as well. We were strolling past the pools, which at that time of night were only sparsely populated, and I saw a couple of guys in the water, splashing each other. They seemed to be having a great time, and one of them tackled the other and dragged him under. They both came up sputtering and laughing, and then they kissed. And something in my head went click.

I've never written m/m before. I've read it extensively, but for some reason it just never stirred my muse. Until then, of course. Back to the hotel to make more notes and revise the old ones...and still it just wasn't right.

I shelved the whole project for a few months. I couldn't bring myself to start writing it when the concept just wasn't working for me.

And then, one day I was rummaging through my notebook, looking for something else (which I never found, by the way) and came upon my very sketchy outline. I skimmed it, misread a sentence, and realized what was missing. A third man. Click.

I've never written ménage before either, so this was a big step for me. I immediately began doing research, reading every m/m/m story that caught my interest. I hopped online, and plumbed the depths of information available there. And I wrote and deleted many scenes.

It took me a while, but I did eventually get the story the way I wanted it. My focus was to capture the hot, sultry weather, the laid-back environment, and the sheer excitement out on the reef. And to wrap it all up in a sexy package with a romantic ending, of course!

Diving in Deep by Louisa Masters 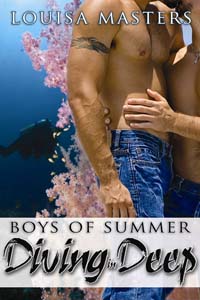 Cameron is sick of being a stereotypical nerd. In an attempt to “reinvent” himself, he takes three months off for a holiday in Australia—something the old Cameron would never do.

Troy and Jake are in a committed relationship. Co-owners of Sail Away, a water sport and cruising company, their life is about sun, sea and each other.

Neither Troy nor Jake have ever participated in a menage, but after a day out on the water, both are fantasizing about sandwiching Cameron between them. Cameron has never been with a man but can’t stop thinking about the hunky couple, and how they’d look, naked and entwined. When he walks in on them having sex in the underwater observatory, he can’t look away—and then they invite him to join in.

Will the old Cameron sink in uncharted territory? Or will the new Cameron find himself diving in deep?

The bell over the door dinged, and Jake glanced up from the computer. Any distraction from the bookkeeping was welcome. He smiled at Troy. Was it that time already?

“Hey,” his lover said, crossing the room and leaning across the desk. Jake met him halfway, planting a quick, hard kiss on those soft lips. A sharply indrawn breath drew his attention to the man who’d followed Troy into the office.

“Hey, yourself.” Jake pulled back and nodded to the stranger. “Going to introduce me to your friend?”

Troy half-turned. “Sure. Jake Paulson, Cameron Hall. Cameron came out to the pontoon with us today, and now he wants to get his dive certificate.”

Jake reached for the drawer where they kept the list of reputable dive instructors. “No problem. We have a list of some excellent dive companies. I’ll make a copy for you.”

Troy cleared his throat and looked away. “Actually, I said we’d give him the lessons.”

Jake’s hand froze on the drawer handle. What the hell? “Oh.” He raised an eyebrow, but Troy’s gaze was fixed on the desk. “Okay. Um, what arrangement did you make?”

They didn’t do certification lessons. He studied the stranger—Cameron. He was kind of gangly and had a very faint tan, probably as a result of the day on the water. His hair was the same shade between blond and brown as Troy’s, but Troy spent so much time outdoors that the sun had streaked his with gold.

Cameron fiddled with his watch. “Troy said you’d work that out.”

“Did he?” Jake glanced at Troy, who made a sheepish face.

“Yeah. Uh, I thought he could come out on the boat with the regular day-trippers, and you or I could do his lessons. At a reasonable rate?” The questioning lift to his last sentence was accompanied by his puppy-dog look, the one Jake could never resist.

His gaze met Troy’s mocha-latte colored eyes, and his stomach did its usual flip. He sighed. “Sure. Sit down, Cameron, and we’ll work something out.”

Troy grinned, shooting him a grateful look, and the hairs on the back of Jake’s neck stood on end. Why did this matter so much to Troy? He turned his attention back to Cameron as the man sat in one of the visitor’s chairs. Cameron’s hazel eyes gazed back at him.

Diving in Deep will be released by The Wild Rose Press on August 3rd as part of their Boys of Summer series. In the meantime, please check out my other titles!

Louisa lives in Melbourne, Australia, where she has a long-standing love affair with the sensual pleasures of life: wine, bubble baths, ice-cream and books. Nothing gives an illicit thrill like reading a sexy story on the train while those around you are oblivious. Get into a sexy state of mind and feel that thrill with Louisa’s books!

Email ThisBlogThis!Share to TwitterShare to FacebookShare to Pinterest
Labels: A Ghost of a Chance, Diving in Deep, inspiration, Louisa Masters, M/M romance, menage

I love this tale of how your story evolved. Sometimes our subconscious knows best how the tale should be told.

Thanks for being part of my Man-Fest, and good luck with the book.

Thanks for hosting me, Lisabet! Being part of your Man-Fest has been an absolute...pleasure.

I always love finding out how a book comes to life.Thanks for sharing. Great excerpt.

From the blurb, this is going to be one hot as hell book. Thank you so much for sharing with us.
slinkydennis@yahoo.com
Rhonda D

Wow, Louisa--congrats on finding the inspiration for your m/m(/m) debut! Funny how it seems that sometimes the stories and characters direct your efforts as an author! Best wishes for many sales!

Thanks for your post! I can't wait to read your book. I love m/m/m. Three's not always a crowd!