Thank you, Lisabet, for being once again such a wonderful and generous host.

I have a confession to make. Don’t worry, it’s only a small and rather insignificant one, but for a writer of the erotic-romantic genre interesting enough to tell about. I don’t care for the alpha male as fictional character. You know, the one who combines a huge amount of self-confidence with a far above average talent to take the lead and make the decisions. Those traits often go together with an impressively muscled physique and unmistakable masculine facial features. Of course, if he isn’t actually in a leader’s position within his trade, then he will have a high-testosterone job, like soldier, policeman, fire-fighter or adventurer.

Now, don’t get me wrong, I can understand, up to a certain point, why this character is so hugely popular in the erotic-romance stories and why they are a fixed element in so many fantasies of straight women and gay men (and of course of bisexuals of both sexes). He’ll make sure you’ll never have a dull moment and looks good while doing that.

Also, the alpha male is perhaps relatively easy to write. He’s often the one creating the action, the one who has all the adventures, who takes risks and probably doesn’t run away from a fight. Whatever his weaknesses as a character may be, boring isn’t one of them.

And yet, the alpha male has never been a huge inspiration for me as (main) character for my stories. Not that I’ve always been aware of this fact, or that it was ever a conscious decision, it simply didn’t happen. It’s only recently that I started to notice the pattern. It doesn’t matter if it’s the “serious stuff” I write as R.A. Padmos or the erotica by S. Dora, none of my main characters could be described as alpha males by any stretch of the imagination.

My main characters are observers and outsiders. They doubt far beyond simply having initial doubts about something before they make up their minds. They are never quite certain about their own worth, honestly surprised as they are that a beautiful and interesting human being can truly be in love with them.

Isaac is an eager student, with lots of questions. He never assumes to be right about anything concerning his role as dominant. This makes him perhaps a bit different from the dominants we often see in romantic-erotica, but if a character like Isaac makes you curious, then I’m happy to tell you that Part One of the series,  Facing the Truth, is available at Total E-Bound and the next one, The Right Direction, will be published on August 24th. Pre-orders, starting at the 13th of August, will be rewarded with a 15% discount. (http://www.total-e-bound.com/authordetail.asp?A_ID=203#booklist) I hope to be able to present my publisher with Part Three soon.

A small excerpt from The Right Direction 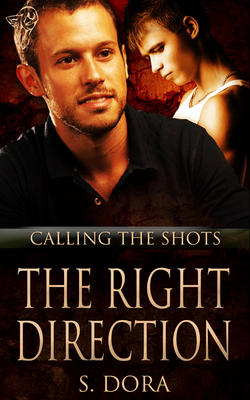 Isaac had been slightly worried that the package of toys he had ordered from the online adult store would not get there in time, but on Thursday afternoon, right after he returned from work, the doorbell rang and the postman handed it to him.

He walked straight to the bedroom, with Tom in his wake. “Can I take a peek?”

Tom pouted. “Not even if I wear my collar? You know, do a trial run?”

“Again, no.” Isaac managed to sound stern, but only just.

“Okay, I get the message. I’ll make supper.” Tom gave in. “It’s not like you can hide it from me, anyway. If I really want to know what’s in that package, I will find it.” He must have seen the look of disappointment on Isaac’s face, because he hastened to say, “That’s not what I meant. You can put everything in the toy drawer and I give you my promise not to peek unless you tell me to. Though if you’ve bought as many toys as I think you have, there won’t be enough space in one drawer, so you might want to use the other one as well.”

Isaac kissed him. “Thanks for being a good sport. What are we having for supper?”

Tom winked. “That’s for me to know and for you to find out.”

Before Isaac could react, his lover was gone. He laughed for a moment, then stared at the box wrapped in brown paper and went very quiet. This was what he had ordered and paid for. He had masturbated thinking about how he was going to use his purchases on his sub. While it was for fun and spicing up sex, he couldn’t help but think it had become so much more. They hadn’t needed any formal rituals to use a cock ring or a string of anal beads, yet Tom had knelt at his feet, called him Sir and had looked so full of joy when Isaac had given him his collar.

With slightly trembling hands, he tore away the paper and opened the box. He quickly unpacked everything and placed the items neatly on the bed. He gazed at the collection for what must have been minutes before he finally picked up the flogger. Starting by admiring the handiwork of the craftsman who had made the object was the safest option. Though he had never before held a flogger in his hands, Isaac recognised the exquisite detailing and perfect balance. According to the description on the website, this particular flogger was perfect for teasing a sub, but also made for a nice thud. Isaac hadn’t been sure what thud meant in relation to sting, but now that he was holding the object, the words came alive. He caressed the inside of his forearm with the suede stripes and smiled. In his mind, he could already see Tom’s shivers of anticipation when he introduced his lover to this fine instrument.

The cane, however, told a very different story. In all its stern simplicity, it spoke of danger. A disconcerting quiver of pleasure shot down his spine. His cock filled. Quickly, he put the cane back.

Posted by Lisabet Sarai at 2:56 AM

Greetings, and welcome back to Beyond Romance.

I feel the same way. I rarely write true alpha heroes, because I find them far less interesting. I love the idea of a Dom who really isn't sure what he's doing, but who's educating himself in order to fulfill the needs of his lover.

First of all, this sounds like a great book.It obviously needs to join my TBR!
Secondly, I think I can go either way...it just depends on the story. I love a strong alpha male when called for, but there are also times when the quiet, underdog needs to be the hero too...maybe that just means I'm too easy ;)

i almost always wonder where did this guy come from? i tend to like a hero that has the traits of both the alpha and the beta. that way he is a lot like your guys above, he knows when to be stern and when to be soft. :D

In my opinion a good alpha hero needs a touch of Beta in him, because otherwise you would just constantly want to wring his neck.

This is interesting because while I certainly read books with the "traditional" alpha male, and I don't find anything wrong with those characters, I find myself more drawn to other characters. Personally I'm more drawn the brains over brawn, so to speak. Smart is sexy, no doubt about it. If given a choice I'd probably be more drawn to the nerdy/geeky science type as opposed to the traditional dominate alpha male type of character. However, having said that, looks can be deceiving and just because one doesn't present as a dominate alpha male doesn't mean that they can't be a fantastic dom, for either a scene or a relationship. And my comments aside, your books sounds lovely. I can't wait to read it.

Interesting commentary. The true alpha does need a touch of humility to keep the rest of us sane.

I love the idea of the reluctant alpha. All that testosterone has to be burden one would think.

Very happy to be back, Lisabet.

I totally agree with you. Doubt is sexy, because it makes sure a Dom is willing to learn.

I've never been an alpha lover, myself...I've always seen them as control freaks, and they offend my feminist sensibilities. A little vulnerability is a sexy thing, and I don't think it necessarily negates a dom's power (think of all the subs who top from the bottom!).

I like to read a mix of things and sometimes the big, alpha is just not what I want to read. I am always looking out for new concepts and ideas and beta heroes. Thanks for the post! jepebATverizonDOTnet

The reluctant alpha, one of the best ideas in romance ever. I can't wait to read your series, it sounds awesome!!