An Interview with Rafe Cowell

Rafe Cowell is Quarantine's second hero – although a reluctant one. We'll let him tell his story in his own words.

Interviewer: You were one of two human guards working at the Camp Malheur quarantine facility. How did you end up there? 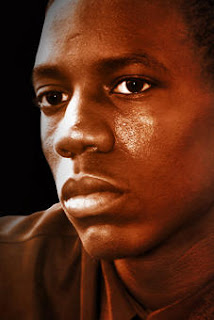 Rafe: Back in Ellay, a guy from a rival gang was bumped off. I ended up taking the rap. But I had nothing to do with it, I swear. Anyway, the so-called public defender swore she'd get me off if I named names. Fat chance. They found me guilty anyway – but told me I could serve two years as a quarantine guard instead of ten years in jail. I jumped at the chance. Didn't know what a hell hole the camp was! Sometimes I think I should've chosen the can.

Interview: But then you wouldn't have met Dylan.

Rafe: Yeah, right. I guess I should be glad, even though that smart ass kid pretty much turned my life upside down.

Interviewer: So, before Dylan, did you ever fantasize about sex with a man?

Rafe: Are you shitting me? What do you think? I was a red-blooded American guy who liked women with nice, fat butts. I knew the queers were sick, just like everyone said. Maybe the Plague was just another sign of that sickness. Anyone who even hinted that I liked men would have ended up with a bloody nose, or worse. I still don't understand how Dylan changed me so much.

Rafe: That wasn't it. I tried to tell myself that was why I fell for Dyl, but it's a lie. And it wasn't the boy's sexy ass, either. No, something about him – I don't know – touched me, somehow. He was so intelligent, so brave, and you know, so desperate for freedom. I wanted to hate him, to think of him like the dirt the Guardians told us he was. I just couldn't.

Interviewer: So you helped him to escape.

Rafe: (laughter) I tried, anyway! Dylan's a bit cocky - you might have noticed if you interviewed him already. He's brilliant, sure. But maybe not quite as much of a genius as he thinks. So we had this great plan, but he forgot one important detail. He nearly died because of that.

Interviewer: I gather you've come to his rescue a number of times – for example, when he was kidnapped by Kevin Randall.

Rafe: Dylan does get his ass into trouble! But you know, it feels so good when I can help him. I grew up with everyone telling me I was a piece of shit, so I kind of believed it. Dylan made me see that I could be strong and smart as anyone. I'll tell you the truth, man – nobody's ever cared about me the way Dylan does.

Interviewer: Does that mean you've forgiven him for leading you on so that he could get out of the camp? For seducing you? Making you into a fag?

Rafe: Who are you calling a fag? (pause) Sorry. I guess you're just winding me up, right? It's still hard to think about the way we started. When he's not around, I start to wonder. Does he really give a shit about me? Is he with somebody else? But I have to believe him when he says he loves me. Without that trust – well, we wouldn't have anything, would we?

Interviewer: No, I guess not. So, Rafe, is there anything else you'd like to share before we end this interview?

Rafe: Hmm. Life's been tough since Dyl and I got together. But I don't regret it – any of it. Let 'em say that I'm as much of a pervert as he is. I don't care. When we're together, the whole world just goes away. Everything bad and ugly and painful – it all just disappears. There's just him and me, in this pure, bright place.

And I think that's the way it's supposed to be.

Interviewer: Thank you, Rafe, for being so open. I just want to remind visitors that they can read your entire story in Quarantine. And if they'd like more insight into you and Dylan and your unusual love affair, there are more than a dozen excerpts posted as part of the Quarantine blog tour. Furthermore, every comment on any post here at Beyond Romance counts as an entry for the blog tour grand prize, a $50 gift certificate.

Wow, there's so much there just from the interview. Definitely makes the book sound intriguing...

I love Dylan and Rafe...I love their love for each other too...I really liked this book Lisabet! Great interview :)

I'm so glad Rafe and Dylan found happiness in each other in such a dark world.
Another great interview! I really am liking this book!

Thanks for the interview! I can't wait to find out what happens to Rafe and Dylan.