The second week in October includes National Coming Out Day. It’s an international observance despite the name. You can read about the history of NCOD pretty much anywhere, but the Human Rights Campaign has a particularly good description.

Since the earliest days of the gay rights movement, activists like Harvey Milk understood coming out as a political act. Even now, four decades in, the evidence is overwhelming that it’s really, really difficult for a person to remain homophobic when he or she knows a person who is lesbian, gay, bisexual, transgender, or otherwise a member of a sexual minority.

But coming out is a personal act too. Disclosing such a big part of the truth of who you are is scary, even if you’re pretty certain you’ll be received with love and acceptance. It’s worth it, even when the cost is high. I’ve lost friends and I have relatives who don’t bother with my big queer self anymore. But I’ve been honest, and I’ve been brave. I’ve been a person my kids can be proud of (and they are -- you should see them at Pride events!). Coming out is usually worth the effort.

And it is an effort. For most of us, coming out is a process. The process is sometimes full of switchbacks and hairpin turns -- it’s seldom linear or logical. Moreover, the process is never complete. Every time I’m in a new setting or meet new people, especially settings or people I’ll be spending significant time with, I have coming-out decisions to make. In or out? Now or later?

I’m in my mid-forties now, and I started coming out to lovers more than twenty years ago. I was out to my students before I was out to my mom. I wasn’t out to my doctor until one thought to ask. And I wasn’t out at work until I took a tenure-track job in public higher education. Which brings me to another point: sometimes coming out isn’t about the person coming out.

I teach social sciences at an urban community college. Many of my students are LGBT youth (or not-so-youth) whose school and family experiences have been less than supportive. Some of my students are homeless, or living in group homes, or working so many hours in their efforts to remain independent that I have a hard time understanding how they maintain passing grades. More than one of these determined, hard-headed, damaged, brave students have told me that knowing someone like me, having a professor who’s out, makes a difference.

Some of my students (and indeed some of my colleagues) have never met a gay person or a trans person. I’ve run National Coming Out Day events at which more than one person asked, “What is coming out?” and then backed warily away from the information table when I explained. That kind of ignorance hurts my heart, but it’s not always the end of the story. So folks who think LGBT people are strange or wrong or other, I’m out for them too.

Not a lot of people I work with know I write fiction. But to me writing LGBT stories is one more way to be true to myself, and to honor the truths of those who’ve shared their lives and stories with me.

I usually try to mark National Coming Out Day by coming out -- exercising my voice, being visible, presenting my full self -- in a new venue. But I’m pretty well out all over these days, so I’m especially grateful to Lisabet for the invitation to share a guest post here at Beyond Romance.

So here goes: Hi there, Beyond Romance readers. My name is Lee Benoit, and I’m an out, proud bisexual.

Now, readers, do you have any coming out stories to share? Don’t forget, LGBT Allies are often faced with their own coming out dilemmas. I’m all ears!

Many thanks, Lisabet, for inviting me to visit here today! I look forward to continuing the conversation!

About me: Before dawn and after dark, I am a writer of queer fiction, some contemporary, some speculative, some historical. During the daylight hours I am a professor of sociology & anthropology. In the old days, I traveled the world doing field research. Nowadays, I live in the middle of a New England hayfield where being a two-spirit single parent provides more than enough excitement. I also paint watercolors, bake wild-yeast sourdough bread, rear guinea fowl, and share my bed with a pair of cats and an abjectly adoring hound-retriever mutt. Whenever I get itchy feet and miss the world of research and advocacy, I invent a new world in my head and take notes on what happens there.

The highs and lows, exhilaration and challenge of coming out in all its varieties may drive my fiction more than I think. My latest full-length release, SERVANT OF THE SEASONS, (Torquere Press) is the story of a post-apocalyptic world in which an ally loses almost everything in defense of his lesbian employees and then rebuilds his life around the discovery and exploration of his own same-sex attractions. I didn’t set out to write a story in which self-knowledge and self-disclosure were pivotal, but that’s the way it unfolded, and I’m pretty pleased with it! 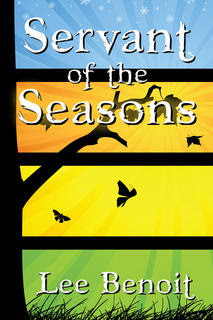 Here’s a blurb: When architect Mèco is turfed -- ejected from his protected but autocratic Dome -- he finds himself adrift in a dying and dangerous land. With no choice but to scrape his survival from an abandoned farm, he tries to improve his prospects by acquiring an animal to pull his plow. What he ends up with instead are two slaves, a bonded pair of Novigi, a strange people Mèco's never heard of. As the land slowly awakens by their combined efforts, so does Mèco's sense of himself as a man and -- maybe -- a lover. But when their fragile home is threatened by brutal gangs of Salters, Mèco and his friends discover being servants of the seasons may not be enough to protect their new way of living and loving. They must become warriors.

Originally published as the four-part Torquere Press Chaser series Servant of the Seasons; revised and re-edited for re-release as a full-length novel.

Email ThisBlogThis!Share to TwitterShare to FacebookShare to Pinterest
Labels: coming out, Lee Benoit, LGBT, Servant of the Seasons

Welcome to Beyond Romance, and thanks for providing such a thoughtful and inspiring post.

SERVANT OF THE SEASONS sounds fascinating, too!

Hi, Lee.
I admire and applaud the courage it took you to "out" yourself to the community at large. It is certainly a difficult leap to make, even in the post-DADT (and other idiotic legislation) era.

I guess I've always taken a more Zen, Japanese take on it: Some people like it a certain way, so they do it a certain way. What's the big deal? This was reinforced to me with my bisexual wife and her (flagrantly homosexual male) best friend. Why should a person's sexuality matter, when you get right down to it?
I myself am straight. Whether by choice or because the right "him" never came along, who knows? But I do know this: I sport a NOH8 proudly on my Twitter profile, and write erotic romance for lesbians, straights, and gays. I'm not ashamed or embarrassed by it, and anyone who is can go straight to Hell, sit on a hot coal, and wait for ... something.
As my father would say, "F*** 'em if they can't take a joke." While it's not right that anyone's sexuality should be an issue, your candor and obvious spirit show through in this post. I plan to buy Servant of the Seasons at my first opportunity. :)
Terrific post. I hope that one day, our society at large will be as enlightened as some of the people within it.

My daughter had a hard time coming out and thought we were going to kick her out. We already knew. She sent me an email and would not actually talk for a long time. She has a wonderful partner. They are so satisfying to observe.

Thanks so much for having me here, Lisabet. I agree that any of us who occupy a status (by birth or by choice) that might excite negative sanctions face similar processes. I fret that young people have especially difficult calculus to do because of their vulnerability. Coming out in any way calls for some thoughtful strategizing. :)

JS -- I love your Zen take on the whole thing! I'm often taken aback by the curiosity of others when they learn I'm bi, and shocked when others tell me how hostile that curiosity has been for them. But allies like you make a huge difference. Huge.

Hi Debby -- Your daughter is lucky to have you! For every young person who's had a good, supportive experience, I hear from another who...didn't. So don't underestimate the power of your allegiance!

Thank you for sharing. I was moved.

Thanks for reading, Marybelle!

Go Lee! Your students are so very brave and wonderful and so are you.

Hey, Lee -- what a thoughtful, thought-provoking post. Thanks for sharing your insight. I'm glad you're there for your students - and the non-students - who need encouragement and the opportunity to see someone who represents a world beyond their fears.