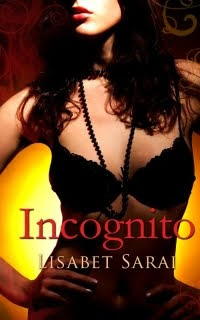 During the day, she works diligently on her doctoral thesis. At night, though, she finds herself drawn into increasingly extreme sexual encounters with strangers. Her anonymous secret life begins to take over when she discovers that the masked seducer she meets in a sex club and the charismatic young professor courting her are the same man.

A wave of vertigo swept over Miranda. She tried without success to look away, as the three strained toward their climax. As if they were one animal, they bucked and shuddered, groaned and clawed at each other's limbs. Finally, they lay quiet and exhausted. Still, Miranda was transfixed. The penetrator knelt between his lady's legs and kissed her deeply there, triggering moans of delight. Then, unexpectedly, he rose, circled around her, and pressed his mouth to that of his well-fellated comrade. With blunt fingertips, he fondled the other man's muscular buttocks, clearly marked by the tracks of the woman's nails.

Miranda was somehow more fascinated than shocked. The trio rearranged itself. The slender man lay atop the woman, his penis firmly planted in her cleft. The heavier man positioned himself behind. Miranda flushed hot with guilt and desire as she watched his thick rod of flesh disappear ever so slowly into the darkness between those smooth cheeks. Despite his mask, she could read ecstasy on the younger man's face, his mouth slack, his eyes screwed shut, his hands gripping the shoulders of the woman beneath him, ploughing her as he was ploughed.

"Lovely," sighed a cultured feminine voice, close to her ear. "Don't you agree?"

Miranda whirled round, startled and embarrassed. She had not realized that she had companions in her blatant voyeurism.

They were young, close to her own age, and enough alike in stature and demeanor that they could have been siblings. Both had thick brunette hair. His was brushed back from his brow, while she wore hers in a bob with blunt bangs. They were clad in black spandex jumpsuits which highlighted every curve and swelling of their slender, athletic forms. Prominent nipples capped her small breasts, clearly visible through the clinging fabric. His half-engorged organ was equally obvious.

They were masked, of course. Brown eyes gleamed behind their dominoes. It was their mouths, though, that captured Miranda's attention, their ripe perfect lips: inviting, sensuous, bowed in the perpetual promise of a smile.

Miranda ached to kiss those mouths, to trace their luscious curves with the tip of her tongue. She felt the ache in her throat, in her chest, in her painfully taut nipples, in the damp, hungry recesses of her womb. Her palms ached to glide over those smooth thighs, those flat bellies. She wanted them, both of them, craved them in a visceral way that was totally new to her.

She stifled a moan, and took the hand the woman extended.

"I'm Marla," the other woman said, her voice melodious and a bit husky. "And this is Marcus." The young man smiled mysteriously but said nothing. "We were admiring your costume."

It took Miranda a moment to recall the red velvet jumpsuit that she had chosen from Lucy's wardrobe. It was defiantly flamboyant, the way it clung to her body like a sensuous second skin. A gold-colored zipper ran from the scoop neck down to her navel. Matching zippers adorned her wrists and ankles. She knew that the color suited her, contrasted with the hair spilling over her shoulders like a river of jet. She also knew how obvious it was that she was naked underneath the velvet. Not a shy garment, thought Miranda, but perhaps just right for tonight.

Choked with desire, she found it difficult to speak. "Thank you," she managed, finally. "I like your outfits also." (What an understatement, she thought to herself.) "Are you twins?"

They gave identical, musical laughs. "Not exactly," said the one called Marcus. "But we enjoy pretending."

His voice was vaguely familiar. However, Miranda was too occupied with other concerns to wonder at this.

The question was serious, and stopped her short. She did not know how to answer. Was she pretending, now? Never had she felt sensations to compelling, so real.

Marla still grasped her hand. "Come play with us," she said sweetly, pulling Miranda toward one of the walls lined with couches.

Then all her awkwardness and uncertainty dropped away. With her right hand, she reached for Marla, her fingers seeking the hard little nubs pushing through the spandex. With her left, she drew Marcus to her, reveling in the sensation of his tumescence pressed against her thigh. Marla's breast cupped in one hand, Marcus' scrotum in the other, Miranda kissed them in turn.

Their mouths were surprisingly different. Marla's kiss was soft, almost tentative, though she readily opened her ripe lips to the probing of Miranda's tongue. She tasted faintly of cloves, sharp and sweet.

If Marla's kiss was a gentle invitation, Marcus' was a challenge. Once again, a fleeting impression of familiarity rose in Miranda's consciousness, then slipped away as hands and lips expanded and complicated the three-way caress.

Marla was slender, but far from boyish. Miranda could not take her eyes from the dusky rose nipples that pertly tipped the girl's palm-sized breasts. Her skin was golden all over with a light tan; there were no pale patches. Marla's hips swelled invitingly from a narrow waist, then down to firm, straight thighs. At their meeting point, her neatly trimmed triangle of brunette curls left Miranda feeling weak and confused.

I've never been attracted to women before, thought Miranda. What's happening to me? Then an image from her past flooded her inner vision. High school, Rebecca -- the minister's wild daughter, long blonde locks flying, laughing as she danced at a party, while a younger Miranda watched from a corner, overwhelmed by a craving she could not name. So, thought Miranda, beginning to understand how little she knew her real self.

Marla raised her arms behind her head, stretching luxuriously as she lifted her thick locks away from her neck. Miranda helplessly admired Marla's elevated and accentuated breasts, the faint, symmetrical trace of her ribs, the slight indentations of taut muscle on either side of her dimpled navel. Then Marla took hold of her own nipples, twirling them between her finger and thumb, so that they lengthened and hardened. Her eyes behind the domino were locked on Miranda's. "Do you like what you see, darling?" she asked. "Can you see how much I want you?"

She relinquished one of her nipples and brought her palm down to brush ever so lightly over her bush. Electric shivers tingled in Miranda's sex as she watched and imagined the other woman's sensations. Now Marla pressed the heel of her hand against her pubis and slid her middle finger in among the curls. Miranda could clearly see its quick, oscillating movements as it teased the woman's hidden clit. Marla's eyes were half-closed, her ripe mouth half-open as her breathing grew more ragged.

Miranda moaned in sympathetic arousal. Then suddenly there was a hand squeezing her tit through the velvet, and another making lazy swirls across her sex, while hot lips nibbled at the sensitive spot where her neck met her shoulder. "Marcus!" she gasped, writhing against the hard body behind her.

"At your service." His voice was almost a whisper, close to her ear, but Miranda still caught the tone of amusement. She reached behind her, felt his warm, dry, naked skin. While she had been focused on Marla's performance, Marcus had apparently removed his jumpsuit.

WOW! What a great excerpt. I'm adding this to my must have list.

Loved the excerpt. Wow what a nice array of books.
debby236 at gmail dot com