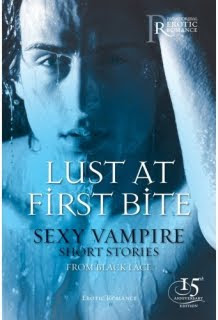 Vampires are the latest rage, and Lara, publisher of Vamp magazine, is determined to ride the trend to fame and fortune. When a blond, wholesome-looking American shows up looking for a modeling job, she's ready to turn him down. He's just not convincing as a creature of darkness. The young man turns to extreme measures in order to demonstrate that he's the real thing.

Casually he trailed a finger up the side of her neck and circled her earlobe. A shiver raced through her, winding tight around her nipples, spiraling down to her sex. He nipped at her ear, playful, but hard enough to make her gasp. "As for me, you know who I am, don 't you? Or at least, what I am."

Lara knew what he was saying. She just couldn't accept it.

"Here." Still behind her, he grabbed her hand and placed her fingers on his throat. His skin was cooler than the air, cool and smooth as marble. "Do you feel any pulse?"

He brought her wrist to his lips, flicking his tongue over the spot where the veins were closest to the surface. His mouth was hot, unlike the rest of him. A violent shudder of desire rocked her body. "Close your eyes," he murmured.

Red flooded the space behind her eyelids, scarlet, crimson, three-dimensional eddies of color like billowing clouds. A brief icicle of fear stabbed at her, then melted as warm, sweet pleasure flowed through her limbs. Her nipples, her pussy, everywhere there was this hot, wet current, aching and yet somehow not urgent.

"Relax," he whispered. "Let go." She heard his voice, coming from a long way off. She saw his eyes, burning through the red haze. They had darkened from blue to empty black. She felt herself tumbling into their depths. Some last fragment of self-consciousness cried out for her to resist, but she ignored it. He was too strong, his will irresistible, the gifts he offered too precious to refuse. She let herself drift. He cradled then released her. She felt herself beginning to drown in the scarlet river of his blood lust.

Leave a comment and you could be one of my winners!

Wow, sounds like one sexy book. It does not pay to go with stereotypes.
debby236 at gmail dot com

EEK! The excerpt ended too soon. This sounds like a must have for me.

awesome cover! hes pretty yummy! :) great excerpt! i have to get this. a must buy! :)
shadowluvs2read(at)aol(dot)com