By the time I turned sixteen and could apply for a driver’s license, none of my five older siblings still lived at home. My mother never learned to drive, and, frankly, in my one-horse home-town in the Adirondacks in upstate New York, a decent ten-speed bike sufficed for getting me anywhere I needed to be, those extra gears necessary for pedaling up steep mountain roads. I was in fine shape back then!

When I started college a couple of hours south of my home in a much more urban setting, my boyfriend Jake was both fascinated and repelled at the thought that his girlfriend was twenty-one years old and still had no driver’s license. Unlike me, Jake grew up with that silver spoon in his mouth. A transplanted Yankee raised in Texas, he swaggered into my life in a high-end pair of custom cowboy boots. He taught me quite a bit about riding (riding what, I leave to your imagination). He also taught me to drive…his brand-new, fully-loaded, eight-cylinder Ford Mustang GT (yeah, I admit it: I grin big every time I hear that “ride it like a Ford” commercial…). Something like three thousand bucks’ worth of damage later, I earned my driver’s license. Jake also asked me to marry him – to this day I am convinced he figured his insurance premiums would be less….Well, Jake was one of my first great loves, but – alas -- not my only. What did endure from those years together is my passion for Mustangs, men in cowboy boots…and horsepower.

I went on to develop quite an affinity for men on bikes – the ones with engines that say “Harley” on them, not the sort I rode around in my one-pony town. I took a liking to boots other than cowboy styles, growing quite fond of black leather and chains in men’s footwear. Somewhere along the way, I admitted to myself that me riding a motorcycle wasn’t so much of a turn-on: what really got me off was the idea of all that horsepower between – ahem -- a man’s legs….

When I decided to write a time-travel novella, I knew I wanted to explore the Regency era. Since I planned to send a contemporary, successful woman back in time, the term “horsepower” took on a whole new meaning for me. While I envisioned my hero as gentry – in this case, an Earl – I also needed to create a man whose purpose in life consisted of something more substantial than changing clothes and squiring supposed virgins about. So…my Earl became a breeder of horses. Boots, horsepower, Mustangs, and mustangs…ergo, a story developed. And then Esme took on a life of her own and demanded that Logan’s riding crop find uses against flesh other than his prized horses.

Jake has no idea what he put in motion when he let me take the wheel…. 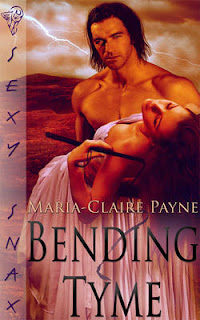 Esme opened the door to his bedroom and curled up in the armchair by the fire, stroking the smooth gold of the Davenport locket, wondering if his mother—somehow knowing, somehow envisioning Logan’s future—had buried the half the workers had unearthed just weeks ago. Or would unearth two centuries later… She shook her head, dizzied by the convergences of time.

Lulled by the crackle of the wood in the fireplace, Esme, reams of legal documents clutched in one hand, drifted off to sleep in spite of the butterflies beating a tattoo in her belly.

She woke to strong arms lifting her from her chair, Logan’s mouth finding hers.

“Yes, I read all about it,” she said, nodding towards the documents littering the floor. “Why didn’t you tell me about this?” She covered his hand with her own, opening the locket.

Logan cupped her face in his hands. “I need you to stay of your own accord.”

Esme frowned. “You planned to just let me leave, then?”

Logan ran one finger along her jutting chin, shaking his head at her contrariness. “Travel conditions would have been such to delay your departure for weeks, perhaps months.”

“Schemer.” Esme looked deep into his eyes, watching their aquamarine brilliance turn that deep blue, knowing his need matched her own, this uncharacteristic shyness she felt only in his arms making her blush. “You know this property will be mine in, like, a hundred and ninety-something years? Don’t get too comfortable, dude.”

“Perhaps you’ll give me leave to stay this night,” Logan murmured, running his broad palms across her curves, cupping her ass, pulling her close.

“You are wearing too many clothes, sir.” Esme felt the hard length of his cock through the layers of material between them, Logan laughing at her impatience as she struggled to undo the buttons and tabs keeping her hands from his flesh.

Finally, he stood nude, the glow from the fire highlighting the muscled strength of his physique. Now he grew impatient, ripping the thin fabric of her chemise from her body. Esme reached up to kiss him but Logan turned her around, encircling her with his left arm, bending her over his bed. The first crack of his new riding crop, the leather stiff, met its mark—he thrust her legs apart with one knee and Esme gasped at the feel of his tongue probing her, his tongue and his fingers in her pussy fuelling the heat rising from where the leather popper had struck her ass.

Logan brought the crop down again, bending his length over her, one hand lacing through her long locks now, jerking her head back. “Is this what you want?”

Esme felt her cheeks burning, her lust matching his own. She lifted herself off the bed, but Logan moved faster, ripping the thin leather wrist strap swinging from the crop handle and rolling her over onto her back. He ignored her slap as she fought to free herself, intent on making this conquest less than easy for him. He caught her hands before she could deliver a second blow, binding them with the leather strip.

Esme kicked out at him but he laughed, spreading her knees with his broad hands, taking away her leverage while his weight bore down on her.

Frustrated, Esme turned to avoid his kiss, but he cupped her face between his hands, forcing her to look into his eyes.

“Is this what you want?” he demanded again, his voice low and husky.

Esme felt the rigid length of his prick against her thigh, the slick film of pre-cum coating the head of his cock, mingling with the moisture dripping from her pussy. Still she bit her lip, refusing to give him any satisfaction.

Logan bent his head, rolling her left nipple in his mouth, delivering gentle bites to her soft skin, biting harder as he moved to give equal attention to her right.

Esme moaned his name, surrendering herself now to the sweet synergy of pain and pleasure surging through her, spreading her legs wider, wanting him in her, right now.

Logan lifted his hips, the head of his cock still teasing her swollen pussy. Esme thrust against him, but he pulled further back in spite of her muffled protests.

Brushing his lips against hers, he asked her again, “Is this what you want?”

Esme arched her back, the need to feel him inside her peaking. “Yes,” she whispered, closing her eyes, revelling in the feel of his mouth, his tongue teasing hers while he slid his full length into her, slowly, so slowly, then faster, slowing his thrusts again just long enough to undo the leather strap binding her wrists.

Her hands free, Esme raked her nails across his flesh, feeling his muscles contract against the pain. He caught her lower lip between his teeth. Biting down, she ran her fingertips along the fresh marks scoring his shoulders, cooling their heat, grabbing his ass.

“Come in me,” she moaned, begging him.

Logan kept his lust in check, moving ever more slowly, teasing her—tormenting her—murmuring her name even as she crested, the throbbing muscles in her pussy contracting, leading him to the edge as well.

Esme wrapped her fingers in the dark curls framing his face. “Turn over,” she whispered, and he obliged, the full length of his cock still encased in the tight walls of her throbbing cunt.

Esme rocked her hips forward and back, grinding Logan’s full length into her, pulling his hands to her breasts, watching his face while he moaned her name, fast losing control of his need. Esme slowed her gyrations, her gentle motions sending waves of ecstasy across her swollen clit. Esme’s gaze met Logan’s, his face reflecting the contortions spreading across her own as she started to come, her own release heightened as his gaze dropped to watch the thick length of his engorged cock sliding in her wet heat, the sight driving him over the edge. She gasped when he pulled her down, his arms demanding, Logan consumed with his own need to explode as Esme felt her cunt massaging his swollen rod, his mouth finding hers as they came together, their bodies slick with sweat even in the cool night air.

Logan propped himself up on one elbow, running a finger along the curve of her chin, finding her lips with his, this kiss tender after the bruising heat fuelling their passion.

“We travel to Tennessee soon.”

Esme nestled into his arms, not caring about further travel plans but content to hear the smooth cadence of his voice as he planned their future—together.

His voice filled with excitement now, Logan talked about the limitless possibilities in this new country, unconstrained by the expectations he had abandoned in England. “Perhaps we might press further west someday. I hear of wild horses roaming free across those lands. An intriguing breed for hardiness…”

Esme smiled, letting him talk, burying her face in his shoulder. Wow, she thought, considering the exquisite 1969 cherry red Mustang parked outside her office. In maybe two hundred years…

Bio: Maria-Claire Payne is the alter-ego of another Claire who holds multiple professional credentials related to the field of radiation oncology and a graduate degree in psychology. Both personalities share a love of taking classes in English literature and reading in many genres as well as getting inked and admiring biker dudes from afar. When no new reading material is readily at hand for whatever reason, her children have caught her reading cereal box-tops to fill the void. Maria-Claire lives in Southern Florida with her two rather conservative (how did that happen?) teenagers, the ghost of her soul-mate (her muse), and a crew of Himalayan and Persian cats affectionately referred to as the “Pussy Posse.” She loves to hear from her fans.

Welcome to Beyond Romance, Maria-Claire!

I've got my own Pussy Posse. Sometimes they make writing a bit difficult.

I wish you great success with both Unstrung and Bending Tyme.

Thanks for having me here at your beautiful blog, Lisabet!

Ahhh, so you too know what it means to have a cup of coffee or glass of wine in one hand, fending off furballs parking themselves on your keyboard with the other, wondering, "Can I type with my toes?" ;)

The Pussy Posse eh? ... being a lesbian, that is truly a double-edged ...entendre!

My black one likes to sit next to my laptop, with her tail deliberately draped across my keyboard. My tiger, on the other hand, tends to flop down his very large (we think he's part Maine Coon) body right next to the fan vent, to soak up the heat, thus obstructing my typing from the other side...

Couldn't live without them, though!