It is all Lea Schizas' fault.

Her response? “Sweetie, I just read your 5th historical romance submission the other day and honestly it is a cat's whisker short of a soft erotica.” Well, imagine how red faced I was at that point. I figured why not give it a try?

A week later I subbed a short erotica called "Larger than Life" for the MuseItHot 'Lacey's Lamp' series. Long story short I was astonished to receive an acceptance letter from Lea. By this time I was feeling pretty cocky...again, pun intended, so I sat down and wrote my October 28th 2011 release, Chained. Or rather, Shianne, the heroine highjacked my muse and spilled her life story out onto the page. Hence 'Chained' was born and along with it my dabbling in soft erotica. Chained is essentially the coming of age story of a young woman in 1974. She makes many mistakes along her journey until one lands her in the arms of Ben, a chain gang corrections officer. Will her mistakes cost her the love she has finally found? You'll have to read the book to find out. 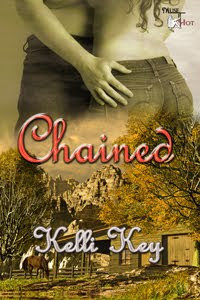 Shianne is a 70's teen crossing over into adulthood. When she makes the mistake of trusting the boy her mother warned her about she finds herself alone and wanted by the law. Then she meets Ben. Hiding out on his dairy farm isn't exactly a city girl's dream but it seems her only choice. She doesn't count on falling in love. If he learns the truth will she lose him forever?

My boots make a squishing sound and I stop. Oh gross, I'm ankle deep in cow excrement. That's right. Shit. If there's one thing worse than the smell, it has to be walking through it, or so I think at the time. I would learn later falling in it is far worse. I literally wade through puddles of excrement and out into an even larger open area filled with black and white cows, big squares of ground up straw, and large cement bunks filled with what looked like regurgitated grass.

“You start by raking the manure out of their beds, and then add a bale or two of fresh straw from behind the barn.” Ben points to the squares, where many of the cows are lying down chewing bubblegum. Okay, it looks like they are chewing gum although I never do see any of them actually blow a bubble. Maybe cows can't blow bubbles. It doesn't make sense to me to chew gum in the first place if you can't blow bubbles, unless of course you have really bad breath. I can only assume a cow's breath is pretty bad, judging by what comes out the other end...

I frown. Cows crap in their beds. God! Even my little brother never pooped in his bed, he peed in it for a couple of years though. “So, I scrape the...shit, from the beds, that's it?”

He grins and I think I should have kept my big mouth shut. “You also need to shovel the holding area into that pit there, but wash the holding area and the milking parlor down with the hose first.

Okay, it doesn't sound that hard. Like I said, I should learn to keep my big mouth shut.

With a final grin he says, “I'll check on you on my break. Have fun.” He saunters off. I have never been so close to calling someone an asshole as in that moment.

Fun? Fun is riding the roller coaster at the fair, dancing to the latest rock and roll record, or hanging out with friends. Shoveling shit does not qualify as fun. I get over it and head for the parlor. The water is cold, but the job itself is not so bad. I don't mind spraying everything down, it's kind of satisfying to get everything spic and span.

The hose takes some getting used to; it’s not your usual little garden variety but a big fire hose type thing. It’s stiff and heavy and, as I discover, hard to hang onto if you turn the nozzle on full blast. By the time I finish the parlor and move on to the holding area, I'm not having such a bad time blasting the watery manure down the grate in the floor.

After I finish washing, I head for the cow beds. Most of the big animals get up and hurry away as I approach, but a few of them turn to stare at me. I have to admit, they make me nervous. I remember my dad telling me animals can tell if you’re scared of them. I wouldn't say I'm scared of cows, I just have a very healthy respect for them. Very healthy.

So there I am, minding my own business when I sense something behind me. Just before I turn around I feel hot breath on the back of my neck. As I spin around, heart pounding in my chest, I come face to face with the biggest cow on the planet. I'm not sure whether to be frightened or just grossed out. Big snot stringers hang from the cow's nose as she sniffs my shirt. I stand there, trying to decide what to do when she swings her head and snots on me. I scramble backward, forgetting the bed area is raised six inches off the main floor by a concrete lip. Before I see my folly I end up flat on my back in three inches of cold, gooey shit. Next thing I know I am surrounded by big, snotty, slobbering black and white beasts. Panic makes my vision blur and my heart race. Holy shit! Okay, not literally, but I am in trouble now. I assume cows are herbivores but I'm really not sure. I'm lying there, trying to decide what to do when suddenly the cows scatter. Through the shit splatter I see Ben approach. He stops in front of me, hands on his hips. His shoulders are shaking and I realize he's trying to keep from laughing out loud. What a jerk! I fail to see anything funny about someone else's feces oozing into my underwear.

“Need a hand?” When he extends his hand to help me up I seriously think of snubbing him, but I figure the least I can do is pay him back.

His facial expression doesn't change as I place my hand in his, complete with crap coating, and I wonder if perhaps he's used to being covered in grossness. Once I regain my footing his silent shaking turns to gut busting laughter.

Bio: Kelli Key is a mother, author and first time dabbler in erotica. (But we'll keep that between us as the kids go to Catholic school!) 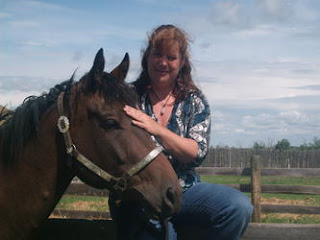 You never know what you're capable of. Good luck with the release!

Loved the excerpt. Sounds like you had fun finding your "wild" side. Best of luck with the new release.