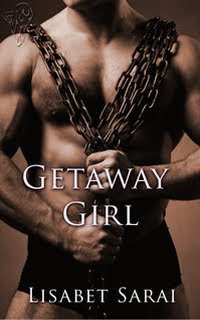 All that Peg wants is a break, a bit of adventure, a relief from her mundane existence in the buccolic but boring Yorkshire hamlet of Kirkby Malzeard. When dashing, sophisticated journalist Lionel Hayes saunters into the pub where she's tending bar, Peg suspects that he was just the sort of man to fulfill her fantasies of escape.

The seductive Lionel, however, is not what he seems. Before she knows it, Peg is a hostage, roped and gagged, speeding away from the scene of a daring crime. Lionel is armed and dangerous, but somehow Peg still wants him - regardless of the consequences.

Peg began to edge backwards. Lionel grabbed her shoulders, his fingers biting into her flesh.

The thief slid his hands down and gripped her wrists, trapping them. "You minx! Don't lie to me." Holding her wrists behind her with his right hand, he leaned over and picked up Jack's glass. A white sludge coated the bottom. He held it up in front of her face.

"Okay, okay. I dumped the remains of my gran's sleeping pills into the whisky. It won't hurt him. Meanwhile, while he's asleep, I thought that you and I might talk." Peg pressed her body up against Lionel's, trying to be provocative while controlling her own arousal. "Perhaps I can convince you to let me go." His grip on her wrists tightened ominously.

His heat penetrated the light fabric of her blouse. She rubbed her breasts against his blazer, wishing despite her best intentions that the two of them were naked. She could feel two hard lumps poking into her abdomen, the unyielding steel of the gun, and lower down, the equally rigid bulk of his erection. A shiver ran through her. She knew that she was playing a dangerous game.

"You're not going anywhere, Margaret. For the time being, I plan to keep you right here." Before she knew what was happening, Lionel had picked her up and thrown her over his shoulder again. She yelped in protest. His arm clamped down across the backs of his thighs.

"Put me down, you -- imposter!" Peg tried to kick, but her legs were effectively immobilised. She beat on his back with her fists, but he ignored her assault as he carried her up the twisty, narrow stairs to the bedroom under the eaves.

Despite her anger and fear, she found herself amazed by his strength. She was nearly ten stone, yet he lifted her as easily as if she'd been a child.

Lionel tossed her body onto the bed. She sank into the old mattress, raising a cloud of dust that made her sneeze. Her captor turned the key in the lock, then returned to face her, grinning that outrageous, irresistible grin.

"We don't want to wake poor old Jack, do we?" He held up the hank of twine from the bar. "I plan to make completely sure that you don't escape."

Peg was suddenly dizzy with desire. She fought for rationality.

"You don't have to tie me up. I won't try to get away." But he was already removing her shoes and fastening her left ankle to the iron bedstead.

He paused and searched her face for a moment, then bent and ran his tongue slowly over her bare instep. The wet heat swept over her extremities, rose to her belly, turned her whole body to liquid. Peg writhed on the old bed, unable to hide her reactions.

By the time she had recovered, her thighs were spread and both feet were bound. Lionel leaned over her, once more grasping both her wrists in his large hand. He raised them over her head, looped the twine around them, then fastened it to the metal pipes that made up the headboard.

"You don't understand, Margaret dear. I want to tie you up." He fastened his lips on hers, those lush, soft lips of his that held such promise. Now those lips were demanding, urgent, stealing her breath, consuming her, claiming her. The kiss went on forever, yet ended too soon. Lionel nibbled at her earlobe, whispered in her ear.

"That's what you want, too." He began to unbutton her blouse.

Peg lay still, to reduce the chafing from her bonds. She did not try to resist him, admitting to herself finally that this was what she wanted, that despite his lies and treachery she was dying for him to take her. The bonds were a convenient excuse, holding her helpless and open so that he could use her as he wished, and she could pretend that she had no choice.

Lionel pulled her blouse out of her skirt and pushed it up around her armpits. Underneath, she wore her best bra, apricot lace with a plunging cleavage. Her captor flicked a finger across her swollen nipple, which poked up insolently through the lace. A bolt of electricity shot through her loins. Her hips jerked upwards. He half-smiled.

"Did you wear this for me, Margaret?" Peg's furious blush was enough of an answer. "How very thoughtful of you." He peeled the cups away, exposing her breasts. When he moved closer, she felt his radiant heat on her bare skin.

He cupped the full globes in his hands, his thumbs making lazy circles around the aching tips. "Lovely. Truly exquisite." He bent and circled the crinkled flesh near right nipple with his tongue, while his thumb continued to circumnavigate the left. Peg moaned, dying for him to suckle her. When he finally took the taut bud into his mouth, though, Peg was not prepared for the sensations.

Some chain of nerves led directly from her nipple to her clit. The pull of his lips on her nipple was transferred immediately to that other, equally swollen bead of flesh at the heart of her sex. Without thinking she pulled her thighs together, struggling to apply the pressure that she craved. The twine wrapping her ankles bit into her skin.

"You've got to relax, Margaret, or you'll get hurt. Let me take care of you. Let me give you pleasure." Lionel ran his fingers through her tangled hair, smoothing it away from her face. He looked into her eyes. Peg thought she saw a hint of genuine concern there, maybe even affection. However, his flushed face and parted lips suggested that his primary emotion was lust.

Embarrassment and desire warred within her. She could not bring herself to speak.

"Do you want me to untie you?"

No! she wanted to cry out, but it was as though she had been gagged again.

Lionel ran his hand up her bare thigh, under her hiked up skirt. He stroked the soaked satin of her knickers, stretched across her pubis. Peg trembled, ready to explode.

"You know, I don't think that you want me to untie you. You're much too wet." He slipped one finger under the elastic and into her cleft, swirling it in her juicy depths for a moment before pulling out.

Wow, sounds like a very hot story. Makes me want to read the rest
debby236 at gmail dot com

Oh so hot. I love the cover. As soon as I saw the cover and read the title, I knew I had to find out what it's about. Definitely going on my TBR!
chamblinh@gmail.com

OK, I really shouldn't have read this at work!

this sounds like an exciting read. one that will keep you on the end of your bed. :) sounds great!
shadowluvs2read(at)aol(dot)com